TheWall: Asset Management: AIIMAN to launch its own retail products 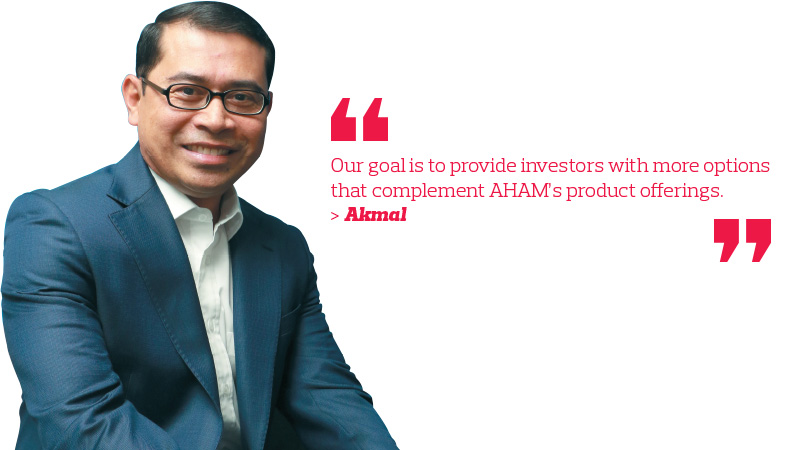 This is a change from AIIMAN’s previous set-up, where it created investment solutions for its institutional clients. The company has also been the external fund manager of AHAM’s shariah-compliant funds since 2009. It currently manages 15 funds for AHAM — four wholesale funds, eight retail funds, two Private Retirement Scheme funds and one exchange-traded fund (ETF).

“So, indirectly, we are already in the retail space. We have been providing our services as an investment manager and learning about the retail business for almost 10 years now. We just did not own any products,” says AIIMAN managing director Akmal Hassan.

Last year, he saw an opportunity to be directly involved in the retail space as well as to strengthen the company’s business and enhance its profitability. In 3Q2018, AIIMAN applied for two licences — the UTMC and Institutional UTS Adviser (IUTA) — which would allow it to carry or market AHAM’s shariah-compliant unit trust funds.

Upon receiving the green light from the regulator at the end of last year, AIIMAN began the process of introducing its maiden offering, the Aiiman Asia Pacific (ex Japan) Dividend fund, to be launched on Feb 21.

AIIMAN may be coming out with its own retail products and services, but its investment management style will not change, says Akmal. It will maintain its investment philosophy, which is consistent with that of its parent company.

“We believe that our focus on absolute returns to deliver positive performance in various market conditions and not merely outperform the benchmark has set us apart from our peers and served us well over the years. We will continue to build on our strengths and look at ways to improve our investment processes and controls to better serve the growing needs of our investors,” says Akmal.

AIIMAN will continue to manage AHAM’s existing shariah-compliant funds. Everything is business as usual as the company’s investment management team and existing business are not affected by the move.

Its ultimate objective is to provide more options for retail investors and independently introduce and manage funds that are different from those offered by its parent company, says Akmal. “Our goal is to provide investors with more options that complement AHAM’s product offerings. Before we launch any product, we will conduct a product gap analysis to determine what is not available in the market and what investors are looking for in the current market cycle.

“When we did that, we noticed that Affin Hwang Capital as a group does not have a shariah-compliant dividend fund. That is why we chose to introduce the Aiiman Asia Pacific (ex Japan) Dividend fund.”

Going forward, the decision to launch shariah-compliant unit trust funds under either AHAM or AIIMAN will depend on the type of product and distribution requirement, says Akmal. “For instance, if there is demand from the banking channels, then AHAM will produce the fund because AIIMAN does not have a distribution arrangement with our banking channels at the moment.”

While he agrees that 2019 will be a challenging year for investors, he still thinks it is a good time for the company to introduce the fund to the market. He points out that AIIMAN is no stranger to challenging market conditions.

“We started operations in 2009, in the aftermath of the global financial crisis. Back then, it was a very challenging environment because people were shying away from the stock market,” says Akmal.

“Against this backdrop, we went aggressively into the market. We told clients that from a long-term perspective, it was actually a good time to invest. We were right. The market was actually at the bottom when we entered. So, we were able to make very attractive returns.

“I am not saying that the market is currently at the bottom. I just believe it may be a good time to invest when most market players are risk-averse and not very bullish.”

The Aiiman Asia Pacific (ex Japan) Dividend fund focuses on stocks in the region that pay out high dividends. Akmal says there are three reasons Asia still looks attractive as an investment destination, the first being encouraging economic growth.

According to the International Monetary Fund’s World Economic Outlook published in April last year, Asia was the fastest growing region, with a projected real annual GDP growth of 6.4% for the next five years. This compared with the US and Europe’s 1.8%, Latin America’s 2.8% and the Middle East and North Africa’s 3.5%.

The second reason is the region’s demographics, says Akmal. About 60% of the world’s population is Asian and the two most populous nations in the world — China and India — are in Asia. “Additionally, Asia’s youth population will be a lot bigger than those in developed nations. This will help spur the growth of the nations further as there will be increased demand and spending on products and services,” he adds.

The final reason is valuations. According to Akmal, valuations in the region are more attractive than those in developed markets such as the US and Europe. “To top it off, our team has extensive knowledge on the region. We think that we are able to minimise risks if we invest in something we like and are familiar with,” he says.

The fund’s investment universe is the Dow Jones Islamic Market Asia/Pacific ex-Japan Index, which has at least 700 shariah-compliant counters, says Akmal. However, the fund will only hold 40 to 50 stocks at any given time.

“High-dividend-yield stocks are generally from defensive sectors, which gave more stable businesses and healthy cash flows. As the risk-taking activity is lower than a growth fund, the return profile should be lower,” says Akmal.

It may be a while before AIIMAN launches another fund for the retail market, he adds. “We do not want to be a supermarket. What is the point of putting everything on the shelf if they are not going to be sold? We will only launch something if we see a demand and gap in our product suite.”

Akmal says the company will work closely with its parent to launch innovative products in the market. In 2017, AHAM launched the country’s first shariah-compliant ETF backed by physical gold, which is managed by AIIMAN.

“Now, AHAM is expanding its innovation in the passive investment space by offering more sophisticated products such as leveraged or inverse ETFs. So, it will not be plain-vanilla products. AIIMAN will be following in AHAM’s footsteps, but we will make the products shariah-compliant,” he says.

AIIMAN was previously known as Asian Islamic Investment Management Sdn Bhd. When it started out, it had about RM700 million in assets under management (AUM). As at the end of last year, its AUM stood at RM14.1 billion.