Thailand’s downturn means even the monks are going hungry 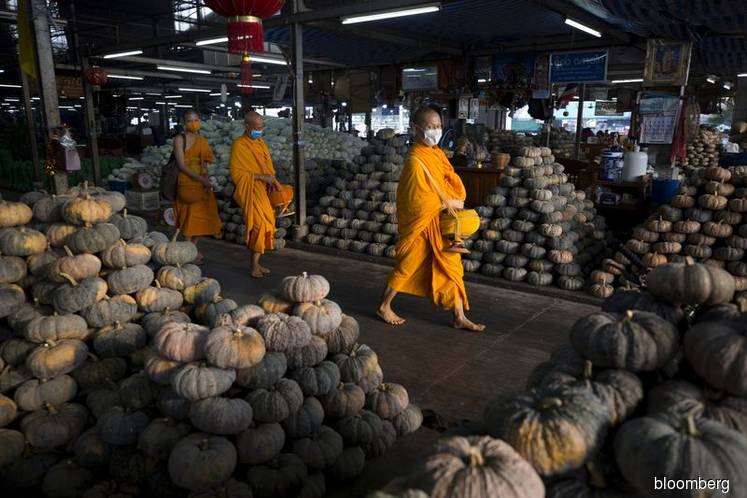 (April 23): Thailand’s cherished Buddhist tradition of giving alms to monks is becoming yet another casualty of the coronavirus pandemic, leaving many of them without enough food.

Traditionally, Thais bring food to monks in exchange for blessings when the orange-robed clergy undertake early-morning rounds, but there are far fewer people on the streets because of a partial national lockdown. The nation’s monks don’t take a vow of poverty, but they do rely on donations for food, robes and other essentials.

“Our monks used to be able to get food from all 10 houses they walked past, and now that’s down to three out of 10,” said Sipboworn Kaewngam, an inspector at the National Office of Buddhism. About a fifth of temples, especially in rural areas, face difficulties getting donations, Sipboworn said.

Thailand’s economic outlook is the bleakest in Southeast Asia because of the outbreak, and millions of jobs are at risk. Some people are now relying on government cash handouts to help feed their families, making it much harder for them to donate to the nation’s 40,000 temples and 300,000 monks.

More than 90% of Thais identify as Buddhist, but temples are quiet and religious ceremonies have been canceled during a state of emergency that lasts at least through April to fight the spread of Covid-19.

In Chiang Mai in the north, for instance, coffee shop and bakery owner Homthongthip Chaipanjaketngam recently closed her shop as business dried up. She then began cooking food for temples to try to alleviate the difficulties monks are facing.

“After talking with the monks, I realized how severe the need is for basics like rice, canned goods and some vegetables, so that’s what I’m trying to collect,” she said.

The abbot at one of the temples she recently visited “was very happy to receive food from us” and “said that monks need nourishment every day just like normal people,” according to Homthongthip.

Sipboworn from the national Buddhism office said a similar scenario is playing out elsewhere. Poor regions in the north and northeast are worst affected, and local authorities are trying to identify and help the temples grappling with food shortages, he said.