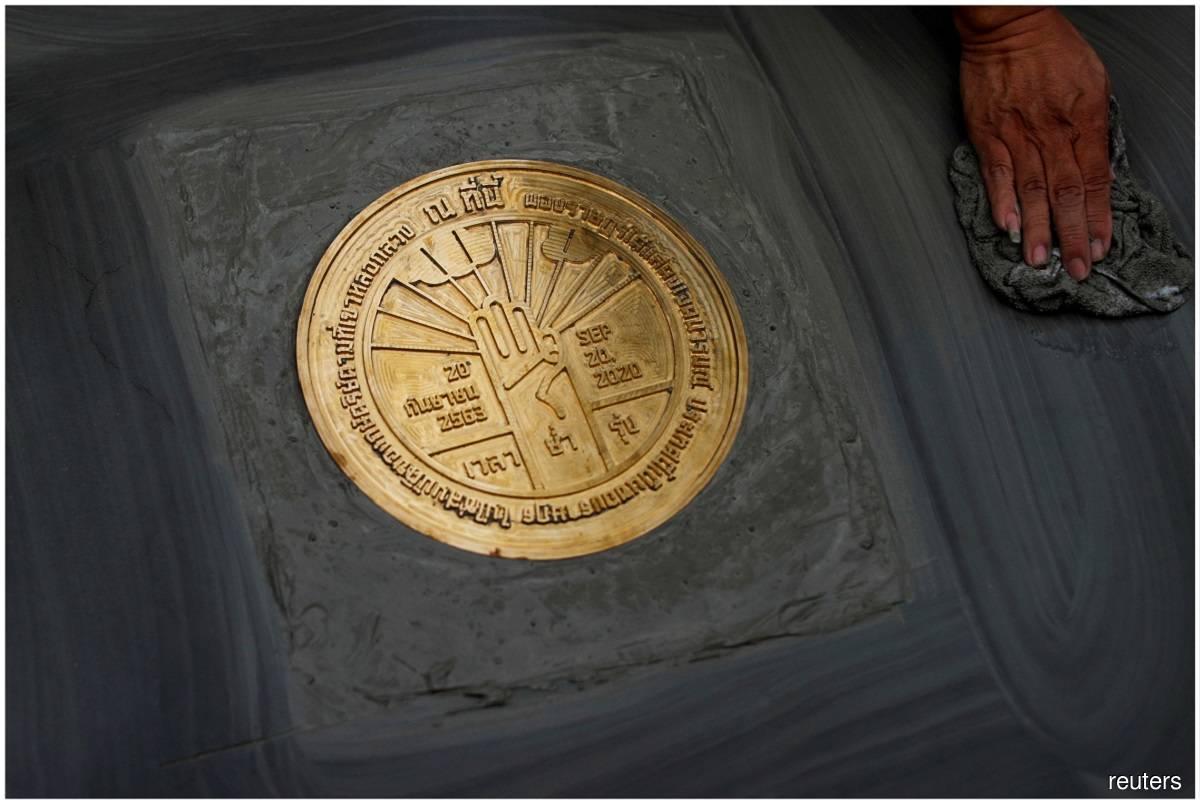 A plaque declaring "This country belongs to the people and is not the property of the monarch as they have deceived us" seen cemented near the Grand Palace in Bangkok before it was removed overnight today.

BANGKOK (Sept 21): A plaque placed by Thai protesters to declare that Thailand belongs to the people and not the king was removed from near the Grand Palace in Bangkok overnight and police said today they may charge those behind the symbolic gesture.

The plaque was cemented in place yesterday after a rally by tens of thousands of people who cheered calls for reforms to the monarchy of King Maha Vajiralongkorn, the latest challenge since activists broke a long-standing taboo on criticising him.

Police said the plaque had been handed over by officials from the Bangkok city authority and the government's Fine Arts Department. One officer said it was "to keep as evidence to press charges against protesters".

Protesters voiced little surprise that the brass plaque had been removed after less than a day.

Protest leader Parit "Penguin" Chiwarak told reporters an electronic file of the plaque was being shared to enable people to make more of them and place them wherever they want.

"The plaque was already placed in the hearts of people. You may remove it but we will make a new one," he said.

Protesters have grown ever bolder during two months of demonstrations against Thailand's palace and military-dominated establishment.

Criticising the monarchy is illegal under lese-majeste laws, but recent arrests of more than a dozen activists — including Parit — were made on other grounds. All have since been released on bail.

Yesterday's demonstration was the biggest since the 2014 coup that brought Prime Minister Prayuth Chan-ocha to power. Protesters called for his removal and for a new constitution and elections as well as for the royal reforms.

Today, Prayuth welcomed the fact the protest was peaceful.

"Nation, religion, and monarchy are the upmost pillars of the Thai people," he told reporters.

The demonstrators said the constitution gives the king too much power and that it was engineered to allow Prayuth to keep power after elections last year. He said that vote was fair.

The symbolism of the plaque is its resemblance to one that commemorated the end of absolute monarchy in 1932 and which was removed from outside a royal palace in 2017, after Vajiralongkorn took the throne.

The plaque said "This country belongs to the people and is not the property of the monarch as they have deceived us".

Craig Kunakorn, 33, a barber who had been at the protests came to visit the spot where the plaque was cemented into the ground today.

"Everyone knew it would disappear soon but the success of creating it is something that will continue. It is still an important symbol," he said.