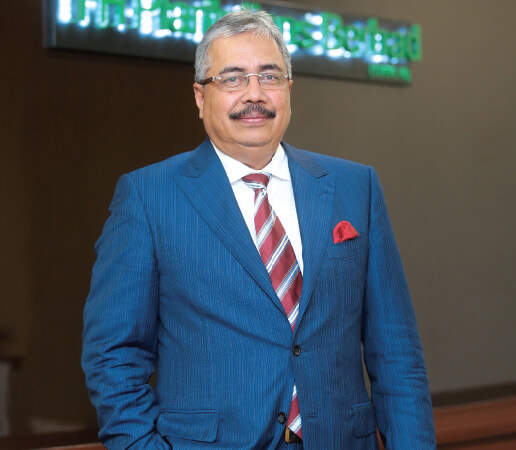 Zainal says the goal is to reduce THP’s gearing to 0.5 times by the end of the year from the current 0.72 times 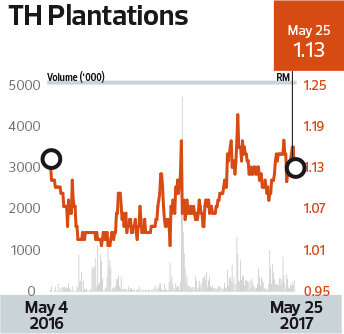 AFTER years of aggressive expansion, TH Plantations Bhd (THP) is now in consolidation mode. It is looking to lop some RM400 million off its borrowings this year in a debt rationalisation plan that is expected to see four non-core assets sold over the next two years.

A key aspect of the plan is shifting part of the debt to its profitable subsidiaries in combination with early partial repayment. The objective is to improve resilience, CEO Datuk Seri Zainal Azwar Zainal Aminuddin tells The Edge.

In August 2014, crude palm oil (CPO) prices fell below RM2,000 per tonne for the first time in five years. The relative weakness persisted through 2015 and prices only returned to the RM2,500 levels in March last year.

“We were hit when palm oil went down to the RM2,000 levels; we were struggling from a double whammy of low CPO prices and yields,” Zainal recalls.

If all goes well, he says, the goal is to reduce THP’s gearing to at least 0.5 times by the end of the year from the current 0.72 times. “[Then], we will have enough buffer should the price of palm oil go down to RM2,000 per tonne again.”

The rationalisation plan entails the selling of five non-core assets, THP says. But one, THP Gemas Sdn Bhd, has already been sold — for RM152 million last year. The sale included 2,819.27ha in Negeri Sembilan and a palm oil mill.

The other four assets are spread across Sabah and Sarawak with two earmarked for disposal this year. THP aims to raise another RM150 million this year for its debt reduction programme.

According to its 2016 annual report, THP has five subsidiaries in Sabah that have assets with a net book value of between RM12.7 million and RM143.35 million. In Sarawak, its eight subsidiaries control various assets worth RM30.1 million to RM525.9 million.

However, back-of-the-envelope calculations show that to achieve 0.5 times gearing, THP will need to slash an estimated RM400 million off its total borrowings of RM1.29 billion — of which RM1.16 billion are long term — as at its first quarter ended March 31, 2017 (1QFY2017).

This implies a mismatch between cash expected to be raised and the amount of debt that THP needs to reduce. Among others, this will be bridged by shifting debt to profitable subsidiaries for which the debt was incurred in the first place, THP explains.

“The whole idea is for their debt to match their cash flow,” says chief financial officer Mohamed Azman Shah Ishak.

Recall that THP had embarked on land bank expansion after its listing in April 2006, going from 15,000ha then to 105,000ha at present. This was primarily funded by a war chest of RM1.2 billion from its sukuk issuance, fully subscribed for by its majority shareholder, Lembaga Tabung Haji (TH).

Nearly half of this amount went into the acquisition and development of 80%-owned THP Saribas Sdn Bhd in Sarawak, through which THP controls 10,670ha of land under a single title.

According to Azman, THP Saribas is now profitable and has raised its own sukuk financing of up to RM300 million for the debt rationalisation plan. Another two subsidiaries are also expected to do the same over the next two years.

THP aims to repay RM205 million of its debt by the end of 2QFY2017 via a combination of the THP Gemas sale proceeds and funds from THP Saribas’ refinancing. The remaining RM195 million or so will come from the disposal of two units slated for sale this year and the deconsolidation of debt.

Despite the degearing push and its recent strong 1QFY2017 numbers, THP’s shares have not seen much excitement. The day after the company released its results on May 23, the stock fell 2.59% to RM1.13.

Part of the problem may be a lack of liquidity — TH holds 73.8% of the company while the Employees Provident Fund owns 6.6%, leaving a free float of about 19.5%.

Zainal acknowledges the issue. “We are going to engage with TH to discuss ways and means of improving our liquidity, how to do placements and all that. We have not started that, but definitely we will,” he says.

The matter is set to be a fine balancing act as LTH had pumped a significant amount into THP’s expansion in previous years. In order to reap returns from its heavy investments, the timing would need to be right.

Of the three analysts tracking the stock, two recommend a “hold” and one a “sell”. Target prices range from 95 sen to RM1.22.

In a May 25 report, Maybank Research cites THP’s high cost structure as a key concern at the moment. It estimates an all-in cost of production of around RM2,200 per tonne for FY2017.

Looking ahead, the coming financial years may provide that return for THP and its shareholders. The palms in 51% of its planted areas are between four and nine years of age, meaning they will enter their peak production age over the next few years.

Another 21% are prime mature palms of between 10 and 19 years, which implies that by FY2020, THP would have about 60% of its planted areas in prime mature and mature ages.

“The upside potential for THP is fairly high,” says Zainal. “In terms of output, we are expecting a 10% to 12% increase in FFB (fresh fruit bunch) production every year for the next three financial years, minimum.”

This growth projection is on the conservative side, the CEO adds. In 1QFY2017, THP saw a production surge of 17% year on year, which powered an 86% y-o-y increase in revenue to RM166.1 million and a return to the black with a net profit of RM15.2 million compared with a loss of RM9.4 million in 1QFY2016.

THP is expecting at least a 10% FFB output improvement quarter on quarter in 2QFY2017. However, the average selling price (ASP) realised may be lower than the RM2,997 per tonne achieved in 1QFY2017 as peak production season is kicking off in mid-June.

In terms of its six mills, THP is targeting an average utilisation rate of 60% this year. It is also exploring the possibility of divesting up to a 40% stake in its rubber plantation arm, THP-Bonggaya Sdn Bhd, in Sabah, which controls 10,117ha under a 100-year lease that expires in 2098.

“When we go downstream at a later time via a processing factor and so on, we would like to ensure that we have some partners who can take up the volume,” Zainal says.