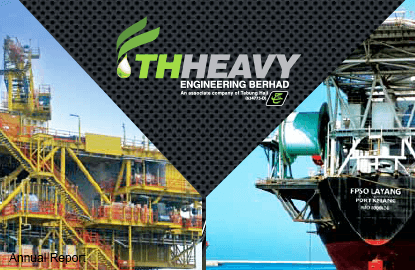 In a filing with the exchange yesterday, THHE said it received a fax from Petronas Carigali last Friday, in relation to TFSB’s ongoing contract execution performance for the procurement, construction and commissioning of KNPG-B Topside PH II, Kinabalu Non-Associated Gas development project.

“The letter states that due to performance-related issues pertaining to the execution of the Kinabalu project, TFSB will be excluded from participating in future Petronas Carigali tenders for a duration of two years,” said THHE.

The group said it will be taking appropriate measures to mitigate the matter, including appealing to Petronas Carigali, as the project had achieved 91% in terms of onshore construction completion.

“Due to the recent cutback in capex (capital expenditure) by oil majors, TFSB anticipates [a] slower project tender pipeline in the near future. In addition, TFSB is not anticipating participation in Petronas Carigali tenders in the present year.

“The aforesaid exclusion of TFSB from participating in future Petronas Carigali’s tender is not expected to have any material impact on the full-year 2016 financial results of the company,” it said.

In a separate filing, THHE said a story in The Edge weekly yesterday that it owed Drydocks World — where its floating production storage and offloading vessel Deep Producer 1 was being refurbished — some US$200 million (RM778 million) was inaccurate.

“To the best of the company’s knowledge, the company was not contacted by The Edge and the company is not in a position to state where the author of the news story obtained such information,” it added in the filing.

Quoting industry sources, The Edge weekly reported that THHE is said to be facing financial difficulties, which have resulted in a delay in the refurbishment of the floating production storage and offloading (FPSO) vessel.

To recap, THHE acquired the asset in July 2011 for US$82.5 million, with the group securing a charter for the vessel in 2014, when it was awarded an engineering, procurement, construction, installation and commissioning contract by JX Nippon Oil & Gas Exploration (M) Ltd.

The contract, which was worth US$372 million or RM1.2 billion when it was awarded, was for the supply and bareboat lease of an FPSO unit for charter at Layang oil and gas field in Block SK10, off the coast of Sarawak.

At 2014 exchange rates, the contract also had an additional potential contract value of up to RM1.46 billion, should Nippon Oil exercise the full extension option of up to 10 years.

THHE closed unchanged yesterday at 13.5 sen, with a market capitalisation of RM151.35 million.