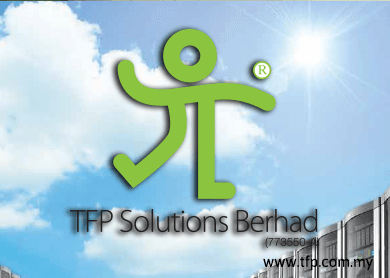 KUALA LUMPUR (June 24): TFP Solutions Bhd expects no significant improvement in its financial results this year, as the enterprise resource planner undergoes a phase of transition to cater to an evolved information technology (IT) sector.

Its group managing director Quah Teik Jin expects revenue to grow by 10% in the next financial year ending Dec 31, 2016 (FY16), after the roll-out of its products and services to Myanmar and Vietnam with a focus on cloud computing and data centre sectors.

"We are in the midst of discussions with a few companies (to form partnerships) in the two countries as we believe the Asean Economic Community (AEC) will make it easier for us to do business there," he told reporters after the company's annual general meetng today.

“For now, we are strengthening our core competencies and we aim to replicate our expertise in the two countries. We look to create at least two partnerships in each country,” he said.

Quah does not discount the possibility of a merger or acquisition in order to create a footprint in Myanmar and Vietnam similar to its Indonesian acquisition two years ago.

Quah acknowledged that the company's financial perfomance has been weak over the years due to a slow economy, hence its plan to consolidate its businesses and expand overseas.

Adding that its decision to expand overseas was to help ensure that is income is sustainable rather than a spurt, Quah said Malaysia currently contribute between 80% and 90% to the company's revenue, while the remaining 20% comes from its Indonesian market.