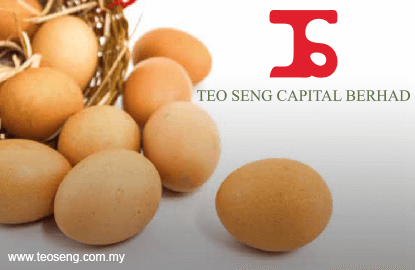 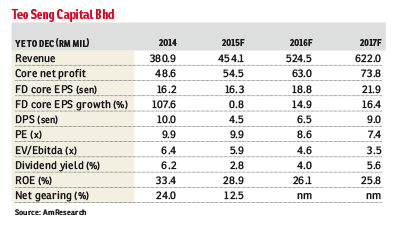 Teo Seng Capital Bhd
(Nov 17, RM1.60)
Maintain buy with a lower fair value (FV) of RM2.45: We reaffirm “buy” on Teo Seng Capital (TSC), but with a lower FV of RM2.45 per share post its weaker-than-expected third quarter ended Sept 30, 2015 (3QFY15) results. Our FV is based on an unchanged fully-diluted price-earnings ratio (PER) of 13 times over rolled-forward FY16F (forecast) earnings.

In light of this, we have revised downwards our FY15F to FY17F earnings forecasts by 19% to 24% to reflect its softer margins (-2 percentage points). Nonetheless, we note that its margins are still superior to that of its peers (earnings before interest, taxes, depreciation and amortisation margin of 19% versus peers’ average of 15%).

The negative variance vis-à-vis our forecast can be primarily attributed to lower-than-expected average egg prices for the cumulative nine months (29.5 sen per egg versus our projected 32 sen per egg). Volumes were firm, with the quantity of eggs sold being 11% higher y-o-y thanks to the addition of its new farm (+400,000 eggs per day) in November last year.

On a sequential basis, Teo Seng’s earnings had improved as anticipated. Note that a better comparison for its q-o-q performance would be its profit before tax (+37%) in view of its abnormally low tax rate (1%) in 3QFY15. We understand that this was due to the availability of a one-off tax incentive (about RM3.5 million) from its increased exports to Singapore.

The rebound in Teo Seng’s earnings was in tandem with the recovery of egg prices in the quarter, that is from an average of 26 sen per egg in 2QFY15 to 29 sen per egg in 3QFY15 (the peak was 34 sen per egg) as well as new capacity from the addition of new houses to its existing farms in July.

Feed prices have also been on a downward trend. Teo Seng’s corn and soybean input prices were still lower by 12% and 7% q-o-q respectively, after adjusting for the currency impact.

Looking ahead, we do not expect Teo Seng’s margins to contract further as any price weakness may be offset by energy cost savings from its usage of natural gas (versus liquefied petroleum gas previously) for its egg tray production and upcoming biogas plant-ups (early FY16).

Teo Seng’s valuations remain compelling. The stock is currently trading at an attractive fully-diluted forward PER of only 10 times. This is a 32% discount to the average PER of 14 times for the consumer companies under our coverage. Since the order-driven selldown in August, Teo Seng’s share price has been on an upward trend, rising 43%. — AmResearch, Nov 17