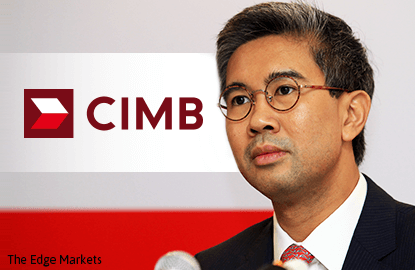 In a statement today, CIMB Group said Zafrul will step down from his position as CEO of CIMB Investment Bank Bhd with effect from the same date.

"In the interim, the board of directors of CIMB Group has elected Datuk Kong Sooi Lin, who is now the deputy CEO of CIMB Investment Bank, as the person in charge," the group added.

CIMB Group chairman Datuk Seri Nazir Razak said Zafrul's appointment reflects the board's confidence in him and underscores his accomplishments as the group CEO since his appointment, as he leads the firm through a challenging period of change and transition.

"CIMB Bank is our largest operating entity and this move consolidates his (Zafrul's) position as the group's primary executive officer," said Nazir.

In the same statement, Zafrul said he looks forward to working closely with the leadership team and the rest of the staff of CIMB Bank.

"It is indeed an honour to be entrusted with this responsibility and I look forward to working closely with the leadership team and the rest of the staff in guiding CIMB Bank towards becoming a leading ASEAN banking group," said Zafrul.