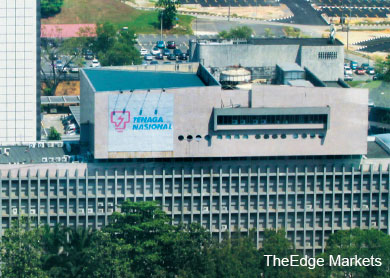 KUALA LUMPUR (Oct 27):  Maybank IB Research has maintained its Buy rating on Tenaga Nasional Bhd at RM13 with an unchanged target price of RM14 and said it etimates Tenaga’s core net profit at RM1.5 billion (up 100% y-o-y, down 4% QoQ), or 29% of the reseach house’s FY14 forecast when the utility giant releases its 4QFY14 results on Oct 30.

In a note Monday, the research house said this would take Tenaga’s FY14 core net profit to RM5.45 billion (up 6% y-o-y), 5% higher than house  forecast.

“We have highlighted Tenaga’s more favourable 4QFY14 fuel mix (the major coal plants have resumed operations) in our previous notes. In our view, this should more than offset 1) cyclically higher expenses in fiscal 4Q and, 2) potentially higher taxes.

“Tenaga is presently benefitting from the lack of a fuel-cost pass- through mechanism, thus earnings risk is skewed to the upside.  At the current run-rate, we estimate Tenaga would have clawed back its “higher-than-budgeted” 1H14 LNG costs by Oct 2014, thus negating the need for a tariff hike in the near future,” it said.

“Tenaga’s coal cost should again remain benign, with the Newcastle benchmark having averaged USD70/t in the quarter (down 12% y-o-y,  -5% q-o-q),” it said.