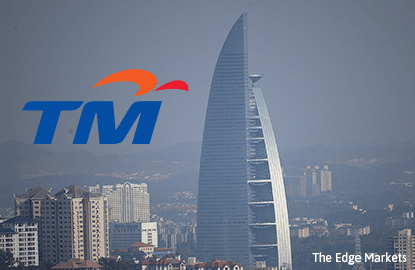 A filing with Bursa Malaysia today showed its latest quarterly revenue came in at RM3.18 billion, versus RM3.16 billion a year earlier, a slight increase of 0.86%, mainly due to higher revenue from Internet and multimedia and other telecommunication related services, though these were partially offset by decline in data, voice and non-telecommunication related services.

TM has declared a second interim dividend of 12.1 sen or RM454.7 million for FY15, payable on Mar 24. The ex-date and entitlement date are on Mar 8 and Mar 10 respectively, a separate filing showed.

Together with the first interim dividend of 9.3 sen per share amounting to RM349.5 million, which was paid in September 2015, TM said the total dividend payout for FY15 is 21.4 sen per share, or RM804.2 million.

For the full year (FY15), TM's net profit dipped 15.81% to RM700.28 million, from RM831.81 million, due primarily to foreign exchange losses from borrowings of the group arising from the weakening of the ringgit against the US dollar.

In a statement attached with its results filing, TM group chief executive officer Tan Sri Zamzamzairani Mohd Isa said, "2015 was a busy year for TM. Despite a challenging environment, our current business continues to grow.

"We maintained our position as the nation's broadband champion [and is] on track to become Malaysia's true Convergence Champion. Last year, the total broadband customer base grew by 4.9% to 2.34 million customers, driven by UniFi. UniFi continues to see a healthy growth of 15.1%, with more than 839,000 customers as at December 2015."

Together with premises passed under High Speed Broadband Project Phase 2 (HSBB 2), he said TM now has wider HSBB footprint of 1.89 million ports, with an overall take-up rate of 44%.

Moving forward, TM said it foresaw 2016 to be a stable year ahead for TM and that the company will stay on course with its established Information Exchange and Innovation Exchange vision, investing for growth.