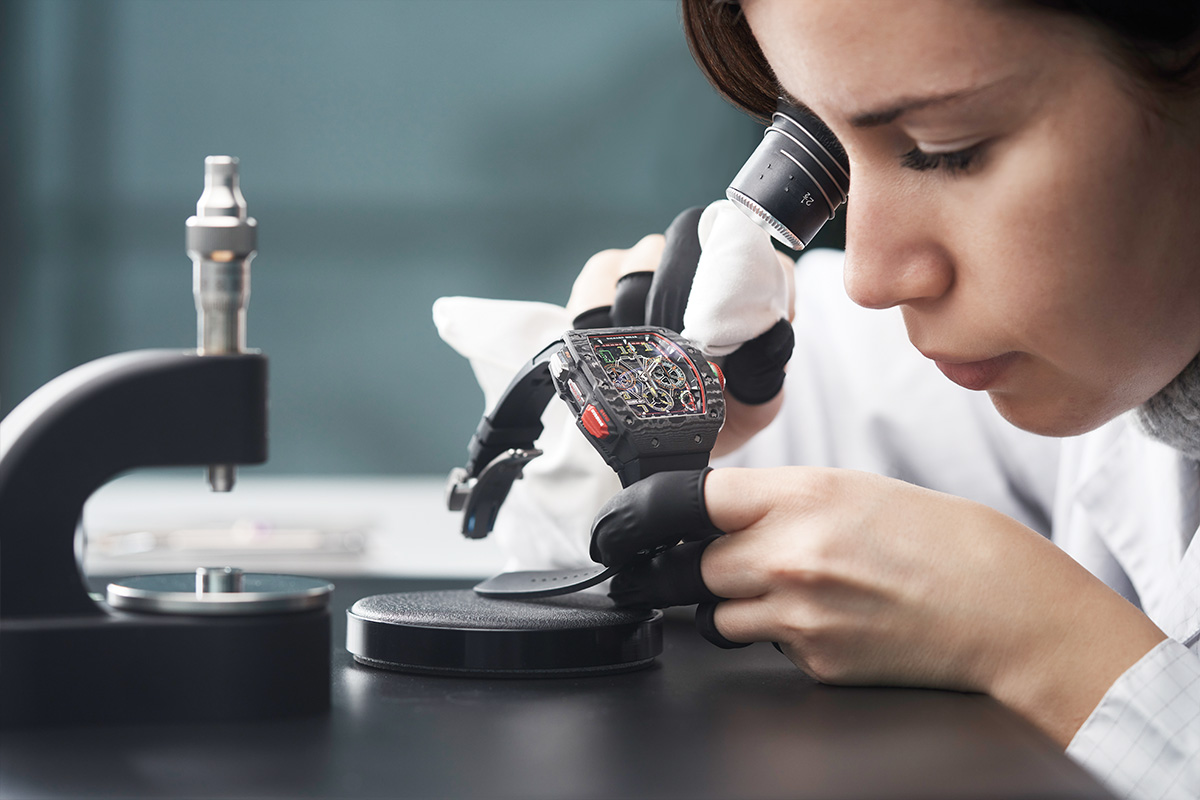 A complex sports timepiece and a masterpiece of technical prowess, Richard Mille’s new RM 65-01 is powered by the maison’s most complicated automatic calibre yet

The audacious and flamboyant manner in which Richard Mille approaches watchmaking is driven by a tireless quest for innovation. From the maison’s first-ever release in 2001, the RM 001 Tourbillon, to the RM 027 Tourbillon Chronograph that Rafael Nadal wore on the courts at Roland Garros and the playful Bonbon collection unveiled in 2019, fans of the brand have learnt to expect the unexpected.

The brand’s most recent release, the RM 65-01 automatic split seconds chronograph, continues with this tradition. The culmination of some five years of development, it is the most complex timepiece ever to leave the Richard Mille workshops, embodying the brand’s technical approach. It is a feat of mechanical watchmaking that called for patience, technicity and perseverance. To tell the watch’s many functions apart, the engineers used a colour coding system

A chronograph for the 21st century, it boasts high frequency balance with variable inertia — 5Hz, or 36,000 vibrations per hour — developed for superior timekeeping accuracy over an extended period and precise stop watch calculations to 1/10th of a second. Developed in partnership with Vaucher Manufacture Fleurier, the integrated movement boasts unfailing consistency with its six-column wheel architecture and vertical coupling. Like a mechanical brain, this castellated piece orchestrates the controls. A me chanical cathedral — standing on a grade 5 titanium chassis supported by grade 5 titanium bridges — it receives its energy from a fast-rotating barrel that maintains ideal torque for energy transmission for the full duration of its 60-hour power reserve. The bar rel’s automatic winding also ensures the watch maintains optimal torque when worn.

“Given its technical edge, which translates to a movement with 480 components, we knew from the begin ning of its construction that the devel opment phases would be long and com plex because all the commands had to be scrupulously checked,” shares Salvador Arbona, Richard Mille’s tech nical director for movement. “But the advantage is that once stabilised, this movement is magnificently consistent. This split-seconds chronograph was subject to a battery of merciless tests that had to demonstrate its correct function in any situation.” The watch has a high frequency balance with variable inertia

The watch marks a number of mile stones, including the maison’s first in house patented rapid-winding mechanism that is activated by a pusher at 8 o’clock. With 125 presses, the barrel is fully wound, ready to time the next event. This highly practical function was particularly difficult to develop because of its high levels of torque transfer. The model has also been enhanced with a new gearbox, which takes the form of a function selector housed in the crown. This system makes it possible to switch between “traditional” winding (W), semi-instantaneous date adjustment (D) and setting the time (H), all done by simply pressing the crown.

Like other Richard Mille chronographs, the RM 65-01 does not have a dial as much as it does a skeletal frame that sits atop the movement. To tell the watch’s many functions apart, the engineers applied a simple yet fail-proof system — colour coding. Yellow is for time — hours, minutes, small seconds at 6 o’clock — whereas green refers to the date display. Orange identifies the chronograph’s sweep seconds hand as well as the 30-minute and 12-hour totalisers. Red is linked to the winding mechanism. To avoid confusion, the split-seconds hand is blue. Every surface of the case boasts elegant detailing

Every surface of the case boasts elegant detailing. Sporting a Carbon TPT bezel, caseband and caseback, it has a microblasted, polished and satin-finished grade 5 titanium crown, framed by the chronograph buttons, also in polished and satin-finished grade 5 titanium. The same material and finish are used for the plate engraved with RM 65-01 on the caseband. The rapid-winding pusher stands out with its red Quartz TPT button.

The watch is available in two finish es — Carbon TPT Gold and Carbon TPT — that pay homage to the technical ex pertise of Richard Mille’s development teams. Embracing the brand’s ancestral codes whilst affirming its own identity, the RM 65-01 is set to take its place in the gallery of illustrious Richard Mille models with technicity at the heart.