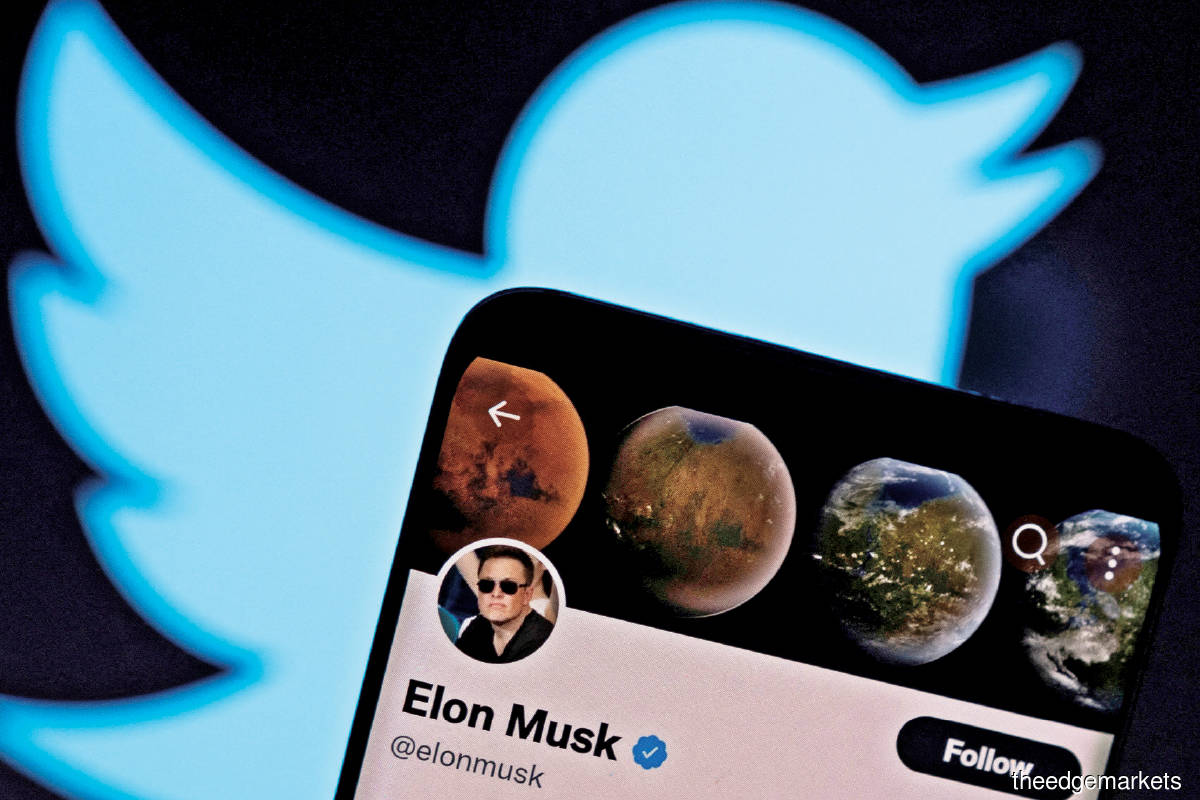 Musk has used hordes of fanatical fans and Twitter bots to charge ahead. (Photo by Reuters)

ONCE upon a time in a faraway planet called Earth, its inhabitants had a fascination with something called social media, or digital channels that help facilitate the creation and sharing of ideas, information and different forms of expression. Things got so crazy that, at one point, the planet’s richest person paid a whopping US$44 billion (RM192.2 billion) for a loud megaphone, affectionately known as Twitter. At the time, it was by far the largest-ever purchase of anything in the Earth’s entire history. The whole world was agog. What on earth was going on?

Someday, when the inhabitants of Mars, or some other distant planet, are writing the history of the universe, they might attempt to put what has been happening recently in proper context. Unless you have been hiding under a rock or have just returned from outer space, you probably know that the world’s richest man, Elon Musk (whose current net worth is US$253 billion) purchased Twitter on April 25 after three weeks of weird tweets, a media frenzy and a firestorm of speculation that overwhelmed everything, including the social media platform at the centre of it all.

I covered the Twitter saga extensively in my column two weeks ago (see “What does Elon Musk really want from Twitter?”, The Edge, Issue 1417) and you have probably seen updates of the ongoing story on the internet or in other media. As such, I will avoid regurgitating information that has been written in excruciating detail and you can find elsewhere. I will also stay away from details of the US$46 billion financing package that investment bankers put together to clinch the deal, including US$13 billion in debt financing, US$12.5 billion in margin loans against Tesla Inc holdings and US$21 billion in equity commitments that Musk put up. And I will refrain from speculating about how soon he might get a margin call from his bankers or what might happen if the banks force-sell some or all of the Tesla stock they are holding as collateral.

So, allow me to jump straight to what has not been covered well elsewhere. Like how the 50-year-old South African-born serial entrepreneur — who was literally broke 10 years ago, having bet everything on his pioneering electric vehicle (EV) firm — became the world’s most celebrated innovator with a growing army of fanatical followers, and the role that Twitter and other social media played in his own rise as the world’s richest man and how Tesla catapulted to become the world’s most valuable automaker, with a market capitalisation US$918 billion. How would he benefit from controlling the world’s loudest megaphone?

To make sense of what the world’s wealthiest man is up to, you need to understand how struggling start-ups these days promote themselves to stakeholders. The way emerging companies market themselves as they seek to grow into large global enterprises has dramatically changed in recent years. Ten years ago, if you were getting ready to sell cars, PCs or consumer goods on a global scale, you would have had to set aside a big chunk of your total budget for advertising and marketing. These days, you can just use internet’s loudest — and most effective — megaphone to tweet all about your product for free on Twitter, bypassing highly paid marketing gurus and big cheques to advertising firms.

Global auto giants such as General Motors Co (GM), Toyota Motor Corp, Ford Motor Co and others spend billions on advertising and marketing around the world every year to meet their sales targets. Although the amount of money they spend to sell cars has been steadily declining, marketing budgets for large automakers are still huge. Global ad budgets for major automakers dipped sharply during the pandemic but are returning to pre-pandemic levels even as the giants sell fewer cars, owing to the acute shortage of semiconductors and other supply chain issues.

GM spends about US$5 billion on advertising annually; Ford’s annual worldwide advertising outlays are about US$3 billion; and Toyota spends nearly US$7 billion globally. Some of the more aggressive spenders on advertising are Korean auto companies like Hyundai Motor Co and its affiliate Kia Corp, which have been trying to increase their market share at the expense of their larger Japanese and US rivals. And this is just the ad budget. Throw in the money the auto giants spend on promotions and soft marketing and the total numbers are even bigger.

To compete effectively against large entrenched incumbents like GM, Toyota or Ford, a start-up like Tesla would have had to pour billions just to create awareness and build its brand from scratch. Tesla, which skirted bankruptcy for years, had no money to spend on advertising; so, Musk resorted to guerrilla marketing and all sorts of antics to promote his electric cars. He used Twitter to taunt rivals and play pied piper to his growing hordes of fans. Tesla has never advertised, indeed never even spent much on any form of marketing or promotion. The money Tesla saves on advertising and marketing goes straight to its bottom line.

Clearly, Musk is not just one of the world’s best innovators and most successful entrepreneurs, he is also by far one of the world’s best communicators and a great showman. Musk knows that, as Tesla moves from selling 1.5 million EVs this year to its next goal of selling nearly five million cars a year by 2025, he needs a louder megaphone. It would be nice if he had a firmer grip or, preferably, total control of such an effective marketing and promotion tool.

To be sure, Musk got this far this fast by using Twitter far more effectively than any other businessman. Over the past decade, Musk has marshalled a growing army of fanatical supporters who have stayed with him, and in Tesla stock, through thick and thin. Indeed, Tesla was the original “meme” stock. The fanatic holders of cryptocurrencies who urge each other to “HODL”, a euphemism to “hold forever”, take their inspiration from long-time Tesla holders.  Now a new study by Professor David A Kirsch and his assistant, Mohsen Chowdhury, at the University of Maryland’s Robert H Smith School of Business shows that, loyal supporters aside, Twitter bots helped build the cult of Elon Musk and Tesla. The bots helped push up the pioneering EV maker’s stock price for over seven years starting in 2013, allowing Tesla to repeatedly raise more cash. The bots would come in droves, create noise on Twitter, causing the stock to rise. Tesla would then raise billions from shareholders, giving Musk more time to steady the ship and keep charging ahead.

Here’s how  it all work: Bots are automated accounts on a platform programmed to do certain tasks without a human user needing to manually start them up every time. They can be programmed to scour the Twitter platform to keep an eye on specific news content or posts, and post negative or positive responses to tweets. Companies, large and small, have long used Twitter as a messaging and marketing tool and bots have always been part of the mix. Over the years, bots have got a bolder and broader role as corporate defenders, alongside their original role as propagandists. Every time someone says something negative about your company, the bots can be programmed to post scathing responses.

If you look at Twitter, it is actually easy to spot the bots. They tend to make a ton of mistakes and cannot string together complete sentences. Maryland University researchers found that a fifth of the volume of tweets about Tesla were bot-generated. They also found that more than 60% of Musk’s followers were “fake”, or bots. Among Twitter users with the largest number of followers — such as former US president Barrack Obama (131 million followers), and entertainers Justin Beiber (114 million) and Katy Perry (108 million) — Musk had the highest percentage of “fake” followers.

The researchers studied 186 Tesla-focused bots that sent 30,000 Tweets praising “positive” sentiments about Tesla over the course of seven years. They traced each bot from the day it started tweeting and discovered that, after the launch of each, Tesla’s stock rose more than 2%. The stock surged more than 19,000% between January 2013 and its peak last November. The stock is down 28% from the peak.

Control of Twitter will help Musk get some of the respect that he believes he now deserves as the world’s richest person. It will also help Musk and his fanatical followers settle scores with other billionaires, including arch-rival Jeff Bezos (net worth: US$169 billion), founder of e-commerce behemoth Amazon.com Inc. Like Musk, Bezos is a space enthusiast, though Blue Origin, his aerospace manufacturer and sub-orbital spaceflight services firm, lags far behind Musk’s SpaceX.

Last week, the Tesla founder and soon-to-be-owner of Twitter went after Bill Gates, co-founder of software giant Microsoft Corp and fourth-richest person in the world (net worth: US$128 billion). Musk had heard from people that Gates still had a big  short position against Tesla, which prompted him to fire a tweet at Gates. “Do you still have a half billion dollar short position against Tesla?” The Microsoft co-founder promptly replied, “Sorry to say I haven’t closed it out. I would like to discuss philanthropy possibilities.” Musk seemed livid that Gates had not only quickly confirmed he was not only shorting Tesla stock but was also asking him to donate much of his net worth to his climate change charity. “Sorry, I cannot take your philanthropy on climate change seriously when you have a massive short position against Tesla,” Musk replied in the exchange that has since gone viral on Twitter.

It is unclear how Musk, who continues to be one of the most prolific of the high-profile tweeters on the platform, can now use it to promote his array of companies, as well as his interests, while running down his detractors and anyone who disagrees with him. What is clear, however, is that, Tesla aside, he has a lot of other ventures that need to be promoted and defended from sceptics and detractors. Musk built SpaceX, an aerospace manufacturer and space transportation services provider currently valued at more than US$100 billion that is among the biggest private contractors of US space agency, NASA. SpaceX’s goal is to make access to space faster and cheaper and eventually build a colony on Mars. After years of botched space launches, SpaceX started to hit its stride five years ago. It was the first private space firm to send a craft to the International Space Station and the first to send astronauts to orbit.

SpaceX’s Starlink, the space broadband internet service, has been helping the Ukrainian army to defend the country against Russian invasion.

Musk also founded and funded The Boring Co, a tunnelling firm that constructs “hyperloop” tubes that will shoot cars at high speeds between major cities, cutting down on highway congestion. The Boring Co has already built two short “test” loops — one in Las Vegas and a “test tunnel” outside Los Angeles. Musk has pushed the idea of constructing a hyperloop between New York City and Washington, DC, that would reduce travel time between the country’s business hub and largest city and its capital, respectively, to just 29 minutes. The Boring Co was valued at US$5.6 billion at its last funding round.

Playing pied piper to a horde of fanatical fans, Musk has deftly used Twitter and its bots to get to where he is today. Now, he is betting that by controlling Twitter, he can optimise the megaphone and take Tesla and his other ventures to the next level. The US$44 billion he is paying for Twitter may not be cheap but, to Musk, it is worth every penny.