Tech: Why the US-China chip war is heating up 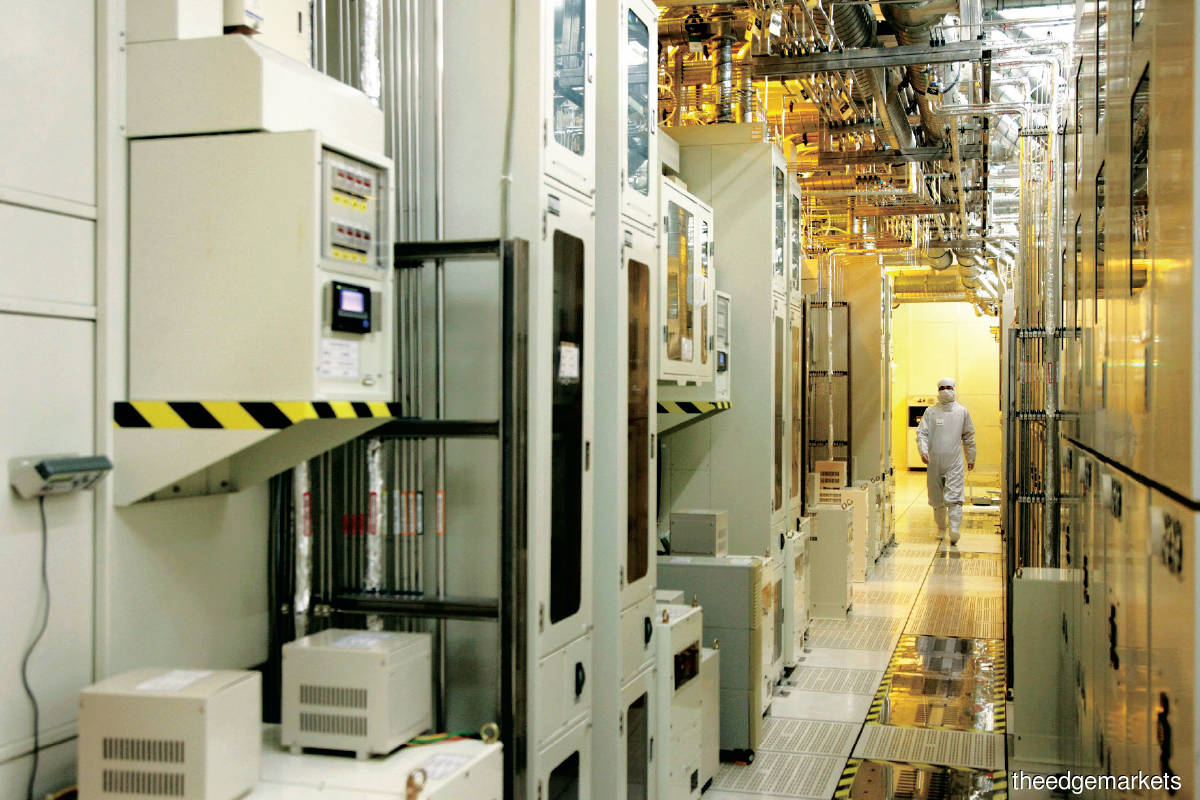 The proposed ban on SMIC is part of the US’ game plan to cripple China’s entire chip ecosystem. (Photo by Bloomberg)

THIS past week, a new space plane prototype flew on a test flight from Jiuquan Satellite Center in the Gobi Desert, landing back on Earth on Sept 6. US satellites caught the landing and part of its journey. Beijing confirmed that a Long March 2F rocket had carried a “reusable experimental spacecraft” into orbit, describing the flight as an “important breakthrough”. The plane was modelled after US X-37B, an American space plane that has been operating for nearly a decade.

A space plane such as US X-37B uses a lot of sophisticated equipment powered by state-of-the-art semiconductors. While China presented the experimental plane as a huge breakthrough, the truth is that it remains dependent on foreign semiconductor equipment manufacturers such as Applied Materials, Inc, Lam Research Corp, Japan’s Tokyo Electron Ltd and the Netherland’s ASML Holding NV as well as foundries or fabs run by Taiwan Semiconductor Manufacturing Co Ltd (TSMC) or South Korea’s Samsung Electronics Co Ltd, which make chips for design houses that do not have their own factories. Without access to chip designs, equipment or the foundries themselves, China will not have the chips that power sophisticated gear in space flights or, indeed, other military equipment or consumer electronics such as 5G smartphones.

Since early 2018, when President Donald Trump’s rhetoric sparked a trade war between the US and China, technology has been the main battlefield, and the epicentre of action has been semiconductors. As the trade and tech war have morphed into a Cold War between the two most powerful nations on earth, the US maintains a clear advantage over China because of its lead in semiconductors. Little wonder, then, that Washington is leaving no stone unturned to deny Beijing access to chip technology, equipment or facilities that might allow it close the gap.

Last week, US Defence Department proposed putting China’s premier chip foundry operator, Semiconductor Manufacturing International Corp (SMIC), the world’s fifth-largest, under an export ban. The US has been for some time now reportedly studying the relationship between Hong Kong-listed SMIC and China’s military. In early 2018, the US had targeted Chinese telecom equipment maker ZTE Corp for skirting a sanctions against Iran and North Korea and banned US firms from supplying components to it. ZTE stock collapsed nearly 70% as it was starved of chips and other components. The US lifted its ban after ZTE paid a US$1 billion penalty later that year.

More recently, Washington has targeted Huawei on national security grounds in an effort to choke the Chinese telecom gear giant. For its part, Huawei has built a big inventory of US chips and obtained exemption to buy some other chips and components from US and Western manufacturers to keep is operations humming.  It had also relied on its own in-house chip design firm HiSilicon Technologies Co Ltd and getting them manufactured by a Chinese foundry — SMIC. Now, Washington has moved against SMIC itself. The US’ game plan is simply to cripple China’s entire chip ecosystem.

The latest US export ban on SMIC, however, signals an escalation of hostilities in the ongoing tech war between the US and China and the use of key Chinese chip players as targets. A long-drawn-out chip war will hurt not only the Chinese semiconductor industry, particularly players such as SMIC, Hua Hong Semiconductor Ltd and Huawei, but also global equipment makers, since China until recently accounted for 24% of total global procurement of chip equipment in 2020. Edison Lee, Jefferies & Co telecoms analyst in Hong Kong, estimates that China’s semiconductor plants currently in the pipeline could spend US$36 billion (RM150 billion) on new equipment over the next few years.

Semi production equipment (SPE) and integrated circuit design software or electronic design automation (EDA) have been identified as the key bottlenecks in China’s drive to localise its entire semiconductor supply chain and become self-sufficient, notes Lee. Washington’s decision to impose the Direct Product Rule (DPR) against Huawei has helped expose bottlenecks in China’s long-term efforts to end its dependence on the US and other global makers, he says.

There are a dozen or so chip foundries, with TSMC being the far-and-away leader in technology as well as sheer scale. The Taiwanese giant has a near-50% share of global foundry revenues. Samsung Electronics has a share of almost 20% in making customised chips for chip design firms whereas Abu Dhabi-controlled GlobalFoundries (which bought out Singapore’s Chartered Semiconductors a decade ago as well as IBM’s New York foundry) is a distant third. Among others major foundry players are Taiwan’s United Microelectronics Corp (UMC), Shanghai-based SMIC and Israel’s Tower Semiconductor Ltd. Aside from SMIC, China has a bunch of other small foundries, including Kong Kong-listed Hua Hong. TSMC derived 14% of its business from Huawei’s subsidiary HiSilicon last year. A complete US ban will mean TSMC could lose 14% of its total revenue base.

China is currently way behind in chip manufacturing. Apple’s new 5G iPhones that will hit the market next month will have TSMC-made chips using its state-of-the-art 5nm process. The smaller the chip, the more sophisticated it is. SMIC recently began using 14nm process and plans to move to 7nm process late next year or in early 2022. TSMC is expected to be using 3nm process commercially by then. Currently, SMIC is three to four years behind TSMC in chip manufacturing. And that is with some access to Western components, equipment and software. Without that access, China could lag further behind, at least in the interim.

Beijing’s key concern has been not just chip fabrication technology, but also the most advanced equipment and chip design software. US firms now account for 50% to 60% of the global SPE market, says Lee. In some key processes, US firms’ market share is close to 100%, and US chip design software firms such as Synopsys, Inc, Cadence Design Systems Inc as well as Mentor Graphics Corp, a part of Germany’s Siemens AG, have a combined 90% share of the global market. SMIC typically sources nearly half of its equipment from the US. It recently announced a new joint-venture foundry with the Chinese government and raised its 2020 capital expenditure budget to US$6.9 billion, from US$4.3 billion.

Officially, Washington is still studying SMIC’s links with the Chinese military before it makes a final determination on the ban. For its part, SMIC says it has no connection with the Chinese military and that all of its products are for civilian use. SMIC was originally listed on the New York Stock Exchange but was delisted last year to return home to Hong Kong and Shanghai.

After the recent A-share IPO, the two largest shareholders of SMIC are China Information and Communication Technologies Group Corp (CICT) (a state enterprise), with a 15.1% stake, and the China Integrated Circuit Industry Investment Fund, with a 17.23% stake. CICT was established in 2018 by merging Datang Telecom Group,  the Bejing-based R&D arm of the former Chinese Ministry of Posts and Telecommunications (MPT), and optical communication equipment maker FiberHome Technologies Group. There seems to be no evidence of SMIC’s military connections, but it is clear that SMIC is controlled by Chinese government entities, and, as such, an easy target to be accused by Washington as a tool of the Chinese Communist Party.

Although it has been portrayed as rivalry over 5G, the US is more concerned about allowing China unfettered access to sophisticated global chip technology. Huawei currently has the biggest shares of 5G patents, but China still lags in chip manufacturing and software. The bragging rights in key parts of 5G have given Huawei no signi­ficant advantage in the overall semiconductor ecosystem. Complex supply chains bind US and Chinese chip firms together and, as such, they depend on each other for cross-licensing and technologies. Moreover, it is too late and too costly for any country to develop its own 5G standard. The US and its Western allies are now focused on charting the roadmap to 6G and seeing how mobile broadband standards can be used as a platform to define the technology.

The US’ approach in tackling Huawei has been two-pronged: Choke off both the supply of components to Huawei and the demand for finished products such as gear to emerging markets telcos. The US has also convinced Canada, Australia, New Zealand, the UK and several countries in Europe to abandon Huawei as a telecom gear supplier and rely mainly on the US or other Western equipment makers. It is also offering financial incentives to emerging market nations to do the same. India has already cut ties with Chinese tech players — not just Huawei, but also Chinese data collectors such as e-commerce giant Alibaba Group Holding Ltd, gaming-based internet giant Tencent Holdings Ltd and social media firm Bytedance, the owner of TikTok. Among other large emerging market economies, Brazil is also likely to heed US calls to abandon Huawei.

For now, Washington’s principal target is not Huawei itself but its chip design subsidiary HiSilicon. By shutting the foundry door to HiSilicon and still giving Huawei the licence to buy chips from Qualcomm, Inc and Broadcom Inc which are manufactured by TSMC and Samsung, the US makes sure that its own chip companies still get revenues from Huawei. The ban on SMIC allows the US and its Western allies to further widen their lead against Chinese foundries. When Huawei buys more chips from US chipmakers under strict Washington licences, HiSilicon gets no transfer of technology or revenues.

Without HiSilicon, China cannot develop sophisticated military technology or space planes like the one it tested last week. It could eventually catch up in 10 years, or probably longer, by pouring in tens of billions of dollars every year for years in research, but US and Western allies are unlikely to sit idly by. Indeed, they will try to expand their lead in semiconductors.

Last month, China unveiled new policies to boost its domestic semiconductor industry, including generous tax relief for chip players and help from state-owned enterprises to co-invest in chip design, manufacturing as well as software. The new incentives to help cut China’s reliance on foreign chip technology also focuses on funding, with incentives for chip firms to list on the Shanghai technology-focused Science and Technology Innovation Board, often dubbed the STAR Market.

Under Beijing’s “Made in China 2025” industrial plan, China had vowed to produce 40% of the semiconductors the country uses by end-2020 and 70% by 2025. With just over 10% currently, it is way behind the first target and the 70% goal for 2025 looks far too ambitious in view of the US ban on Chinese chip makers. China has its work cut out for it as it attempts to catch up in chips to become a powerhouse that can effectively compete with the US.