Tech: What Didi’s IPO flop means for Grab and GoTo 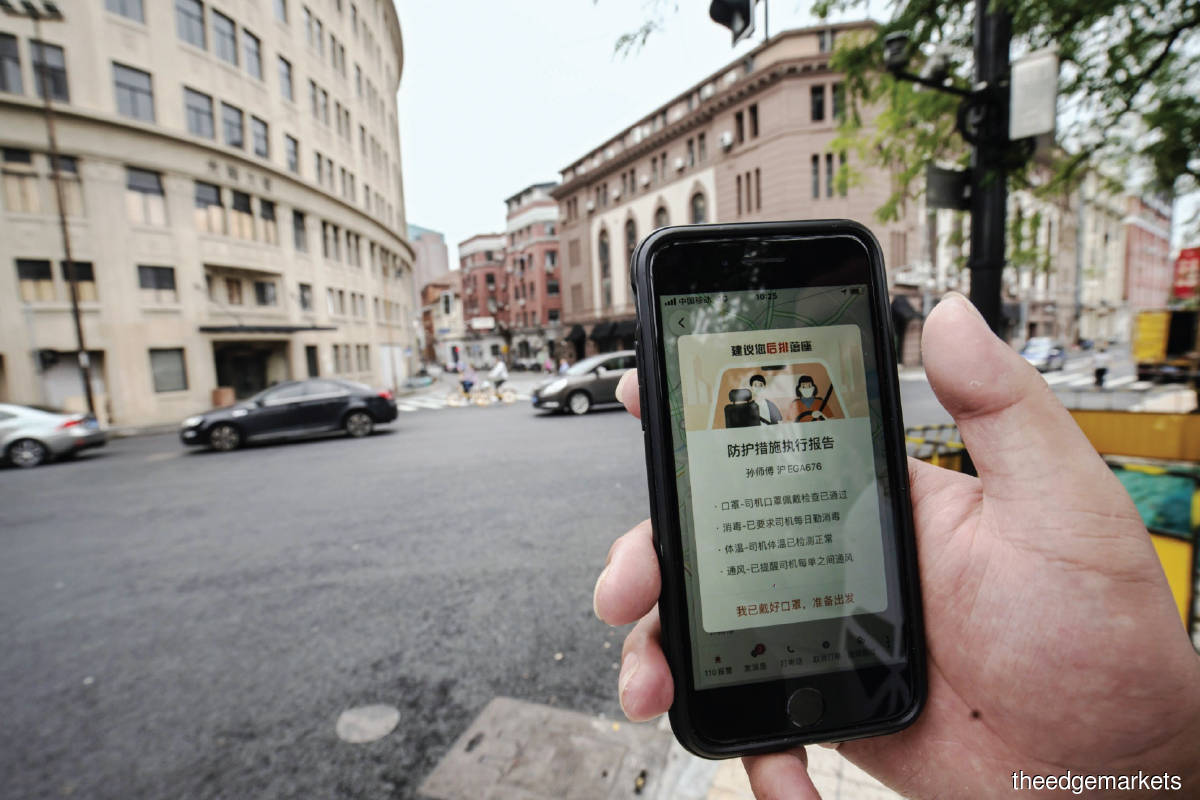 Didi’s app being used in Shanghai. The IPO flop shows investors have ride-hailing and delivery services fatigue. (Photo by Bloomberg)

IT had been billed “the IPO of the year” and the largest China listing in the US since e-commerce giant Alibaba Group Holding Ltd’s debut in 2014. Yet, when Beijing-based Didi Global Inc, the Uber of China and “the world's largest mobility technology platform”, began wooing investors on a virtual road show two weeks ago, it was clear that there was little enthusiasm for yet another ride-hailing firm. Even a last-minute attempt to drum up interest by touting Didi’s global ambitions to become the “world’s largest one-stop transportation platform” and operator of vehicle networks was not enough to move the needle.

On June 30, after surging 29% in the first few minutes of trading, Didi’s stock closed at US$14.14, just 1% above its offer price, or 12% more than its last private funding round two years ago. Goldman Sachs, ­JPMorgan and Morgan Stanley were hard at work to help support Didi’s stock and prevent a fall below the IPO price on its debut day on the New York Stock Exchange. For ride-hailing investors, it seemed like déjà vu all over again. Uber Inc had priced its own IPO at US$45 a share in May 2019 and the stock plunged 56% ten months later at the start of the pandemic. Uber’s stock has been hovering around US$50 in recent days, or 2.5% more than what most venture capital firms paid for its funding round more than six years ago.

There is clearly a ride-hailing and delivery services fatigue on Wall Street. While investors are sold on the disruption that the likes of Uber, Didi, Meituan and DoorDash Inc have unleashed, they are not so sure about the sustainability of the business models or how profitable these companies will eventually be — with or without their much-hyped “platform” status. Investors valued Didi at US$67 billion (RM278.4 billion) compared with Uber’s current valuation of US$94 billion and the much smaller Lyft Inc’s valuation of just over US$19 billion, 16% less than what it was valued at at its IPO 2½ years ago. US food delivery giant DoorDash has a market capitalisation of US$58 billion; its far larger Chinese delivery counterpart Meituan currently commands a market capitalisation of US$252 billion.

Didi’s disastrous IPO that raised US$4.4 billion has huge implications for two Southeast Asian ride-hailing firms — Singapore-based Grab Holdings Inc and Jakarta-based ride-hailing-to­-­e-commerce platform GoTo Group — as well as the valuation of e-commerce giant Sea Ltd, the region’s largest firm, which has a market capitalisation of US$144 billion. Grab is seeking a listing through a SPAC, or special-purpose acquisition company, merger with Altimeter Growth Corp. GoTo, which was formed recently following a merger between Indonesian ride-hailing giant Gojek and e-commerce supremo Tokopedia, is seeking a dual New York and Jakarta listing later this year.

Founded in 2012 by Will Wei Cheng, who once worked for a foot massage firm before joining Alibaba, Didi began as a smartphone-based taxi-hailing service, eventually copying Uber to launch ride-hailing in 2014. By then, Cheng had teamed up with Jean Liu, a 12-year veteran of Goldman Sachs and the daughter of Liu Chuanzhi, founder of PC maker Lenovo Group. In 2016, Didi acquired rival Kuaidi Dache and, a year later, it bought out Uber’s China operations. In 2018, it acquired Brazil’s 99 Taxis and expanded in Mexico. It now operates in 14 other countries, including Australia and Japan, even though nearly 90% of the 493 million customers who used the service at least once in the past year are in China. In addition to the 493 million active annual users, it has 15 million annual active drivers and processes 41 million transactions daily.

Among its early investors were Japan’s SoftBank Group Corp, and Chinese internet giants Alibaba, Tencent Holdings Ltd and search engine operator Baidu Inc. In 2016, iPhone maker Apple Inc invested US$1 billion in Didi as did its biggest contract manufacturer, Taiwan-based Foxconn Technology Group’s Hon Hai Precision Industry Co Ltd. The biggest institutional investor in last week’s IPO was Singapore’s Temasek Holdings. After the IPO, SoftBank’s stake in Didi has fallen to 20.2%, Uber’s stake is down to 12% and Tencent now has a 6.4% stake.

Didi reported revenue of US$6.4 billion, more than double the year-earlier period, with net income of US$837 million in the first quarter ended March. It reported losses of US$2.54 billion on US$21.63 billion in revenue last year. That turned into a slight profit of US$95 million on revenue of US$6.44 billion in the first quarter of 2021. But here is the caveat: Part of that “profitability” in 1Q was attributable to gains on investments of US$1.9 billion related to spin-offs and divestments. Without those extraordinary one-off gains, Didi would still be unprofitable. In comparison, Uber lost US$6.77 billion on US$11.14 billion in revenue last year. In the quarter ended March this year, it lost US$108 million on revenues of US$2.9 billion.

Can they turn a profit soon?

Despite mounting losses over the last two years, Didi still has nearly US$3 billion in cash. If it succeeds in doing a follow-through 15% greenshoe option after the IPO, it will end up with more than US$8 billion in cash on its balance sheet. That is a lot of money to burn, burnish its reputation, fine-tune its business model and make a dash towards a semblance of profitability. Uber CEO Dara Khosrowshahi has said the ride-hailing firm could turn a profit in, or at least break even by, the last quarter of this year. Uber and its US rival Lyft have been able to hike prices in recent months amid a driver shortage as developed economies open up in the wake of falling Covid-19 infections and high vaccination rates.

Didi, too, could turn a profit next year. Xiao Ai, China internet analyst for Atlantic Equities in London, forecasts that the company’s revenues will grow from RMB141.74 billion last year to RMB201.16 billion (RM129.4 billion) this year and RMB250.75 billion next year. Yet, to justify their valuations, Uber, DiDi and their ilk need to dramatically expand their margins over the next few years. Atlantic sees China’s total shared mobilisy spending growing 19% annually over the next four years. In a recent report, it forecasts 39% year-on-year growth in gross transaction value for Didi this year, and 20% annualised growth over the next four years. Xiao forecasts Didi’s operating loss to fall from US$8.3 billion last year to US$1.6 billion this year and turn into US$10.4 billion in operating profit next year. She sees earnings per share of RMB83, or 12.3 US cents, next year.

Measuring Didi against Lyft or Uber is like comparing apples and oranges. For one thing, Didi is not merely a ride-hailing company. More than 20% of its transport revenues come from taxi hailing, chauffeur services (where a driver will drive the customer’s car) or Hitch, a peer-to-peer carpooling service. Moreover, the non-ride hailing part of the business, which also has better margins, is growing faster than the core business.

The way Xiao sees it, Didi is far better positioned than its global ride-hailing peers. Penetration for ride-hailing in China is currently on a par with the US, she notes. “[Yet,] China is a structurally more attractive market for ride-hailing, owing to greater population density and less prevalent car ownership,” she says.

For now, investors in Chinese internet stocks are focused on regulation. Beijing began an antitrust probe into Didi two months ago, just as it was embarking on its listing process. China’s State Administration for Market Regulation is investigating whether the company used anti-competitive practices to squeeze out smaller rivals unfairly, and examining whether the pricing mechanism used by its core ride-hailing business is adequately transparent.

In April, Chinese internet companies Didi, Alibaba, Tencent, Meituan and 30 others met with regulators and were asked to conduct a "self-inspection" and submit compliance commitments. Didi claims it has completed its self-inspection and has notified regulators. It is unclear whether Didi, like Alibaba and others, will have to pay a fine or just continue to be monitored and subject to further self-inspection.

Antitrust issues apart, there are other concerns. Didi has received a lot of flak for several rape and murder cases linked to its drivers, and Beijing wants the firm to vet its drivers and keep a more watchful eye over them. Regulators have also been tightening control, ostensibly in a bid to curb traffic congestion. Drivers are now required to be residents of cities and towns where they work and to be more closely supervised by Didi. Analyst Xiao does not believe increased regulatory scrutiny is likely to scare off investors. “Typically, regulations strengthen the power of the incumbent,” she notes. Regulators have been focused on preventing “subsidy wars” in community group buying, an area in which Didi is expanding. Any move to limit the use of subsidies would clearly be a positive for the company, as it would reduce competitive intensity and allow it to expand margins by reducing its own subsidies, she notes.

For now, all eyes are on Didi’s stock price. If it stays close to current levels or falls below the IPO price, it could throw a spanner in the works of Grab’s merger with Altimeter. If the market values Didi at US$67 billion or less, is Altimeter’s US$40 billion valuation for Grab fair? Initially, the merger was set to close in July. That deadline has been extended to year-end, as Grab is in the process of finalising its financial audit for financial years 2018 through to 2020 in accordance with US Securities and Exchange Commission requirements. Over the next few months, Altimeter shareholders, who will approve Grab’s merger, will be watching Didi’s stock price for clues. If Didi’s stock remains under pressure, the Grab deal may have to be revised or sweetened.

Grab’s SPAC merger will also weigh on GoTo’s US listing, whether it is a traditional IPO, direct listing or SPAC merger. Both Grab and GoTo need urgent funding and cannot afford to drag their feet on listing. GoTo’s investment bankers and potential IPO investors will take a cue from both Didi’s and Grab’s stock prices.

The stakes are high. SoftBank, which is a major shareholder in both Didi and Grab, has not made much money on its audacious ride-hailing bets. Four years ago, it bet US$12 billion on Didi. That is now worth US$13.7 billion, or a 14% return over 48 months. The Standard & Poor’s 500 is up 77% since and the Nasdaq is up a whopping 150%. It will be a long time before a bet on ride-hailing pays off.