Tech: Is SoftBank the next Berkshire Hathaway? 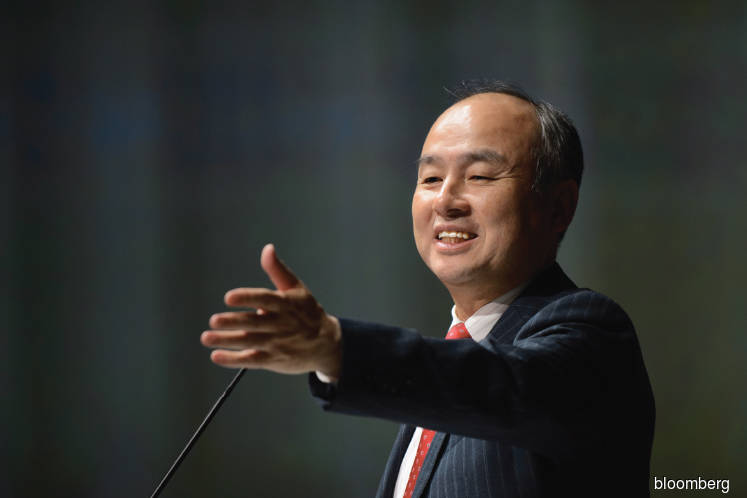 IN February 2000, Masayoshi Son briefly became the richest man in the world, overtaking Microsoft co-founder Bill Gates. Two days later, as the stock price of his Tokyo-listed flagship SoftBank Group slipped, he lost the title. “It was the briefest period anyone has spent being the richest man in the world,” Son recounted in a TV interview a few years ago. Within 12 months of his stint at the top, SoftBank shares had plunged 99% and Son was struggling to keep himself, and his company, afloat.

Yet, Son never had any doubt that he and SoftBank would survive to fight another day. He extricated himself from his brush with near bankruptcy by agreeing to sell a Japanese joint venture with networking gear giant Cisco Systems back to the American firm, which provided him with the lifeline to crawl back from oblivion, invest in a Chinese e-commerce start-up called ­Alibaba Group Holding and resurrect his dream of becoming the King of the Internet again.

Now, the mercurial Son is back, peddling his audacious “300-year” corporate plan, first unveiled in 2010, to invest in 5,000 cutting-edge tech-savvy companies by 2040 to conquer the future. A key plank of that strategy is the Vision Fund, to which the governments of Saudi Arabia and Abu Dhabi, and the CEOs of ­Apple, Qualcomm, Foxconn Technology Co and Sharp have contributed to place big technology bets. Last week, SoftBank confirmed that it had reached an agreement to invest US$10 billion (RM41 billion) in ride-hailing ­giant Uber, through a US$1 billion cash injection and share purchases from existing shareholders, giving it a 17% stake. Goldman Sachs estimates app-based ride hailing will grow from US$36 billion in 2016 into a global industry worth US$285 billion in 2030.

Son, who got his start by distributing Microsoft’s shrink-wrap software in Japan, has built his empire by making big, audacious bets, pouring billions into promising tech companies early and patiently waiting for years to reap the fruits. Indeed, the name SoftBank was reportedly derived from “Micro-soft”, the old hyphenated spelling of the world’s largest software company.

In 1995, Son bought Comdex, owner of the Las Vegas tech trade show, for US$800 million from Sheldon Adelson, who needed the money for his first casino in Las Vegas. Later that year, SoftBank paid US$2.1 billion for tech magazine group Ziff-Davis Publishing Co, the publisher of PC Magazine and PC Week.  He was an early investor in Yahoo! (renamed Altaba after the sale of its US assets to Verizon Communications earlier this year) and formed a joint venture with it in Japan.

He also famously wooed Amazon.com founder Jeff Bezos but failed to convince him to let SoftBank either invest in Amazon or set up a joint venture to sell books in Japan. His biggest success was turning a US$20 million investment in Ali­baba into US$155 billion (including profits already realised through a partial sale). Earlier this year, SoftBank  bought US$32 billion British chipmaker ARM Holdings. SoftBank’s internet investments between 1999 and 2017 returned nearly 15 times their initial investment, although just two — Alibaba and Yahoo! — were responsible for most of the gains.

‘Leveraged to the future’

“SoftBank is the Berkshire Hathaway of tech, leveraged to the future,” says Chris Lane, an analyst with Sanford C Bernstein in Hong Kong. Just like how Berkshire leverages its “float”, or the cash from its insurance business, to invest in other companies, SoftBank uses cash flow from telcos to invest in tech companies positioning to be part of the future — e-commerce, microprocessor designs and robotics, he notes. Just like there are no synergies between Berkshire’s core holdings such as Coca-Cola, NetJets, banking giant Wells Fargo and Burlington Northern Santa Fe railway, there are few synergies between SoftBank’s 28%-owned affiliate Alibaba, its telcos in Japan and the US, its ownership of ARM Holdings and its stakes in ride-hailing companies such as China’s Didi Chuxing, India’s Ola, Southeast Asia’s Grab and Brazil’s 99, says Lane. “The core business of Berkshire is ‘value investing’, not insurance,” he argues, and “for SoftBank, the core business is ‘tech investing’,” not telcos.

Over the last 10 years, an investment in Berkshire Hathaway has produced total shareholder returns of 130%. An investment in SoftBank at the same time would have generated returns of just over 305% in yen terms and 320% in US dollars. Yet, despite this, SoftBank trades at 14.6 times earnings while Berkshire trades at just over 20 times earnings. Since end-2000, Berkshire has outperformed US barometer the Dow Jones Industrial Average by 175% while SoftBank has outperformed Japan’s benchmark Nikkei 225 by over 540%.

But unlike Berkshire, SoftBank has a mountain of debt to feed its oversized ambitions and has been forced to borrow against the soaring value of its assets. It has more than US$100 billion of interest-bearing debt that carries junk-grade credit ratings from Moody’s and Standard & Poor’s. Of the US$7.9 billion of dollar-denominated bonds SoftBank has issued this year, US$4.5 billion have been perpetual securities, registered in Singapore and classed as Reg S, that cannot be sold to investment managers in the US and are mainly aimed at yield-hungry private banking clients in Southeast Asia.

The market currently values SoftBank at just US$95 billion, or a nearly 55% discount to its net asset value or NAV, excluding investments in unlisted ride-hailing companies like Didi Chuxing, Grab and Ola. For a company of its size and the value of its assets, such a discount is unwarranted, says Atul Goyal, analyst for Jefferies in Singapore, a long-time SoftBank bull. At such a steep discount, another company in its shoes would be aggressively buying back its own shares. Billionaire investor Warren Buffett’s Berkshire Hathaway, for example, which shuns dividends and is loathe to buy back its own shares, has a stated buyback policy if the stock falls below 1.2 times book value.

SoftBank’s detractors argue that its huge debt load and the capital gains taxes it would have to pay if it were to sell some of its assets justify most, if not all, of the huge discount the market currently gives its stock. “SoftBank is a goose that eats debt in order to lay golden eggs,” Son said at a news conference in Tokyo earlier this year, when asked about the burgeoning debt. “They have been pretty upfront about their debts,” Dan Baker, head of research for Morningstar in Hong Kong, tells The Edge Singapore. The key, he says, is that SoftBank clearly has the ability to pay its debts from its current cash flow. Debts are only an issue when you cannot service interest and principal payments, he adds.

Just this year, SoftBank and its Vision Fund have made a number of huge investments aside from its big ride-sharing bets. SoftBank invested US$4 billion in Nvidia, a chipmaker whose designs are used in AI-focused servers; US$1.4 billion in Paytm, the leading digital payment platform in India; US$4.4 billion in shared-office provider WeWork, which includes rights to expand the company across Japan;

US$360 million in Guardant Health, a biotech firm that focuses on blood-based tests for early cancer detection; and US$3.3 billion in Fortress Investment Group, an asset manager with investments in private equity, hedge funds and real estate that is providing the “back end” management for the Vision Fund. It also led a US$164 million venture capital round in Mapbox, a provider of an open-source location data platform.

SoftBank is a tech conglomerate with six major units — its Japanese telco business; fourth-largest US telco Sprint; listed Japanese internet business Yahoo! Japan; mobile microprocessor design business ARM Holdings; the US$93 billion Vision Fund and a host of other businesses including stakes in ride-hailing companies globally as well as e-commerce companies in India and the Middle East.

If the huge payoff of its Alibaba bet catapulted SoftBank back to the forefront, the Vision Fund could put the Tokyo-based conglomerate in the league of top global funds. Indeed, the sort of fees Vision Fund is now generating has had the world’s largest institutional investment managers, and even big global hedge funds, salivating with envy. SoftBank will earn 0.8% to 1% in fees for managing the Vision Fund, plus outsized valuation gains. It has put 30% of its own money in the fund but gets as much as a 53% cut of any valuation gains. The fund is made up of US$42 billion in preference shares and US$51 billion in equity. The preference shares earn a 7% annual coupon for 12 years, but do not participate in any valuation gains for the fund. Equity holders, however, earn all of the valuation gains for the fund. Since most of the fund’s investments are stakes of below 50% in tech firms, it will hardly have  any income and, as such, the 7% coupon for the preference shares will be paid from equity. Just the annual management fees from the fund will earn SoftBank up to US$930 million, adding 7% to 8% to its own current annual operating profits.

On top of that, a 10% annual return on investment for the fund will likely yield SoftBank investors over US$29 billion over five years; a 20% return would yield about US$97 billion and 30% would yield a bonanza US$243 billion. SoftBank itself has generated average annual returns of 18% a year over the last 16 years. So, what is the realistic return estimate for Vision Fund? Two weeks ago, at its quarterly results news conference, Son announced that the Vision Fund had already made roughly US$3 billion in profit, or a 22% annualised return.

An important part of SoftBank’s strategy was to help Sprint become a more powerful player that could take on giants AT&T and Verizon. For four years now, Son has been trying to merge Sprint with third-ranking rival T-Mobile US. In early November, the talks between the two broke down because Son reportedly refused to relinquish control of the combined company after the merger. “We could not agree to a merger of Sprint and T-Mobile US that would result in the loss of control,” Son said. But, he noted, Sprint’s finances were improving, so “it will be able to secure funding on its own”. Sprint is now exploring tie-ups with an array of other players including satellite TV firm DISH Network Corp as well as US cable TV companies that are reeling from the “unbundling” of channel packages as streaming services such as Netflix and Hulu have caught on.

One country where SoftBank has struggled in is India. It recently invested US$2.5 billion for a 20% stake in the online retailer Flipkart, effectively rendering worthless an earlier investment of US$1 billion on a rival start-up, Snapdeal. It has poured another US$2.5 billion into Paytm, Ola and other ventures. For SoftBank to succeed, its bets in India as well as its big bets on ride hailing need to pay off.

Although Son is unlikely to overtake ­Bezos or Gates as the “world’s richest” man anytime soon, he has succeeded in putting SoftBank at the forefront again.