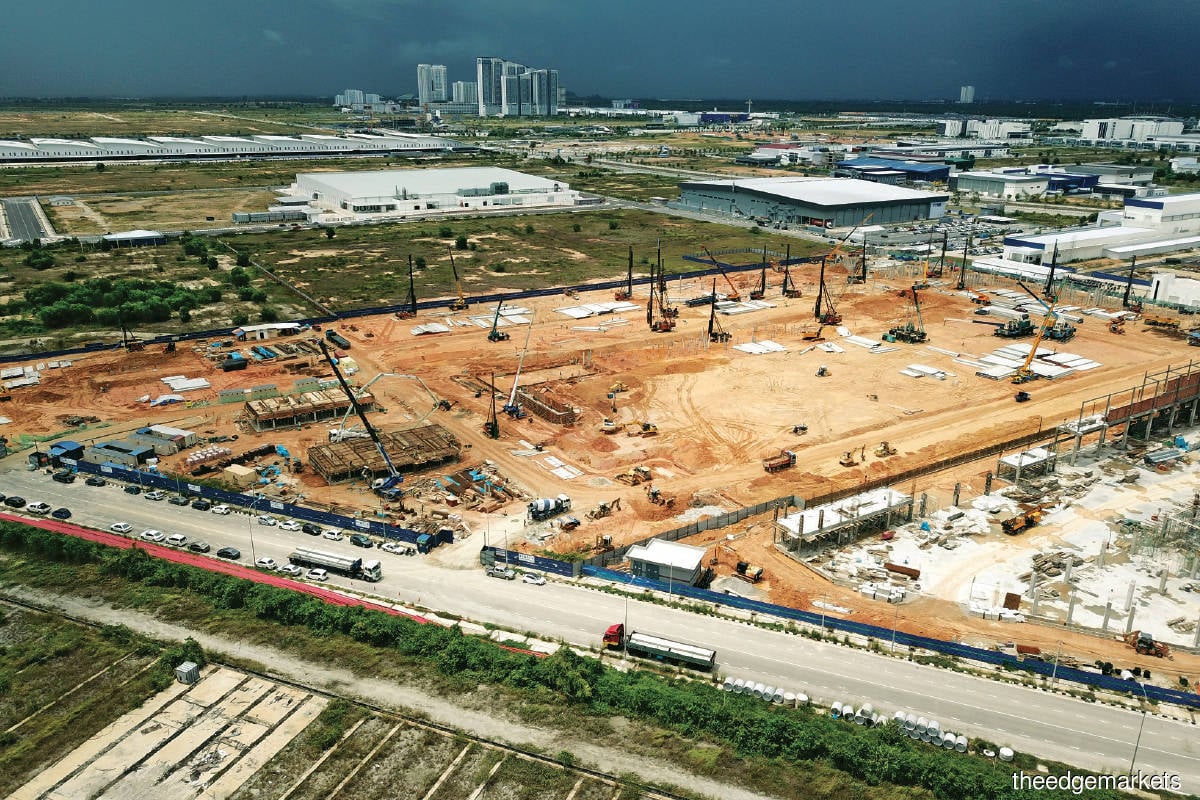 Simmtech’s new facility in Penang is expected to create 1,200 high-value jobs in engineering, manufacturing and quality management by the first half of 2023 (Photo by Simmtech)

On July 30, Simmtech — one of the world’s largest players in printed circuit board (PCB) and packaging substrate for the semiconductor industry — announced that it had chosen an 18-acre site at Batu Kawan Industrial Park for its first large-scale factory in Southeast Asia.

According to its managing director for Southeast Asia, Jeffery Chun, the group intends to localise its supply chain by buying local equipment and using locally sourced materials.

“The construction of our Penang plant just started a couple of months ago, so we have yet to establish a local supply chain here. But looking at our past experiences in China and Japan, it is in our interest to work with local partners and develop a local supply chain for better operational efficiency. We can’t wait to find out more about which local suppliers and what equipment are available in Malaysia,” he tells The Edge in an exclusive interview.

“There will be a lot of automation in our manufacturing lines. Penang is especially well developed in the area of automation. The state has quite a number of competitive local equipment suppliers specialising in automation. We are looking forward to engaging these local suppliers and adding value to our processes with more efficient equipment and automation solutions,” he says.

Phase 1 of the project will cost US$120 million (RM508 million), including land acquisition, construction of a factory and the purchase of equipment, with operation slated to commence by the first half of next year. The new facility is expected to create 1,200 high-value jobs in engineering, manufacturing and quality management by the first half of 2023.

Chun says Simmtech is well aligned with the Malaysian government’s push for automation in the manufacturing industry.

“Looking at our customers in Penang, I am sure there are valid reasons why they are expanding in Malaysia. Like them, we also are confident of growing together with our local partners. For the equipment vendor’s portion, we have more than 50% localisation in China and Japan. We expect the same in Penang,” he adds.

Chun acknowledges that Simmtech needs to source only specialty and patented equipment from overseas suppliers. Other than that, the group hopes to localise them as much as it can.

“To us, the higher the localisation, the better. Penang is well known for having semiconductor equipment manufacturers, which are also expanding their operations in Batu Kawan. I am sure there will be more resources available to us in the future.

“I can’t give you the exact figure, but I would say a significant amount of our planned investments has been allocated for buying equipment,” he says.

Apart from equipment, Simmtech is looking to source direct and indirect materials such as chemicals locally. It goes without saying that South Korea is one of the world’s most technologically advanced countries, with companies the likes of Samsung, SK Hynix, LX Semicon, Hana Micron and Telechips. But it was Simmtech that became the first major South Korean investor for the semiconductor industry in Penang.

“A couple of years ago, our group had fully utilised our capacities, so we had to expand. From our perspective, it’s a natural decision to come to Penang, specifically to Batu Kawan, because we have a few customers in the region — including two key ones — that are already here. To us, the proximity to our customers is one of the most important criteria,” Chun says, adding that Phase 1 of its investment will be made through its local unit, Sustio Sdn Bhd.

Since its establishment in 1987, Simmtech has been focusing on developing and manufacturing high-layer PCB for global semiconductor leaders. Its major products include module PCB for semiconductors’ memory expansion and substrates for semiconductor chip assembly.

Notably, its memory module PCB, board on chip (BOC) for dynamic random-access memory (DRAM) package and embedded trace substrate were awarded “World Class Products” by the South Korean government, with the largest market share in the world.

Besides South Korea, the company has factories in China and Japan. The Sustio project in Penang will be the group’s third overseas factory project, as well as its first large-scale plant in the region.

Once in full swing, the production capacity in Penang will contribute an additional 20% to Simmtech’s current combined capacity in South Korea, China and Japan.

Sustio is ultimately owned by Kosdaq-listed Simmtech Holdings, the holding company that mainly focuses on investment activities for the group’s businesses. Simmtech Holdings generated a net income of KRW23.4 billion in the financial year ended Dec 31, 2020 (FY2020) on revenue of KRW1.2 trillion. The counter has gained about 18% year to date (YTD) to close at KRW3,085 last Tuesday, giving the company a market capitalisation of KRW125.45 billion (RM451 million). The stock is currently trading at a price-earnings ratio (PER) of 6.1 times.

Simmtech Holdings also owns a majority stake in Simmtech Co Ltd, a company that operates the group’s factories in South Korea, China and Japan. Simmtech Co, also listed on Kosdaq, reported a net income of KRW56.49 billion in FY2020, on revenue of KRW1.2 trillion as well. YTD, the stock has advanced 31% to settle at KRW31,400 last Tuesday, bringing the company’s market capitalisation to KRW1 trillion. It carries a PER of 11.4 times.

Penang also houses a number of PCB manufacturing players, including Ibiden and ELNA PCB, as well as home-grown companies such as Main Market-listed GUH Holdings Bhd and QDOS Flexcircuits Sdn Bhd, which is owned by Suiwah Corp Bhd, a diversified group that was privatised and delisted in 2019.

Chun, however, opines that currently, there is no large-scale PCB factory and packaging substrate manufacturing facility in Malaysia. Therefore, it is safe to assume that Simmtech does not have any direct competitors in Malaysia.

“We know that there is a strong demand for local supply. We will be more than happy to supply our products to the small and medium customers here. But first, we need to learn more about what they need,” he says.

On when Simmtech will move to Phase 2 of its investment, Chun says much depends on the direction of its customers and the overall market demand.

“Right now, our planned capacity for Phase 1 will have sufficient volume to cover what our existing customers are investing in Penang. If there is any further expansion from their side, or if we acquire new business or secure new clients in Malaysia, then we will think about Phase 2. At this point in time, there is no definitive schedule for Phase 2 investment, but we will always be looking for opportunities.”

According to the World Semiconductor Trade Statistics (WSTS), the worldwide semiconductor market is forecast to increase 19.7% in 2021, followed by another 8.8% growth in 2022 to reach US$573 billion.

Specifically, memory is estimated to experience the fastest growth among all semiconductor subcategories, at 31.7% in 2021 and 17.4% in 2022. The memory semiconductor subsegment market is expected to reach US$182 billion in 2022, representing about 32% of the total worldwide semiconductor market for the year.

The growth in the memory subsegment will be underpinned by several factors, which include the heightened demand in cloud and fifth-generation (5G) communications, other wireless devices and miniaturisation of devices.

Due to the rapid technological advancements in semiconductor memory devices, the demand for new generation memory devices, such as the 5G DDR5 DRAM, has increased. Such dynamics open up opportunities for all industry players within the supply chain, including the advanced PCB and substrate manufacturers.

It is worth noting that Simmtech first came to Malaysia in 2017 by acquiring T E Tech (M) Sdn Bhd, a final inspection house in Rawang, Selangor.

“T E Tech was established in 1995 by Eastern Co Ltd, a Japanese parent company that we acquired in 2017. Since then, T E Tech has supported all products coming from our factories in South Korea, China and Japan,” Chun explains.

Going forward, the Rawang inspection house will continue to be part of Simmtech’s supply chain, supporting its future factory in Penang, he says.

“The Rawang site covers the final inspection of our products. It is a service site, not a manufacturing one. Right now, it is already engaging some local logistics partners and inspection equipment vendors.”