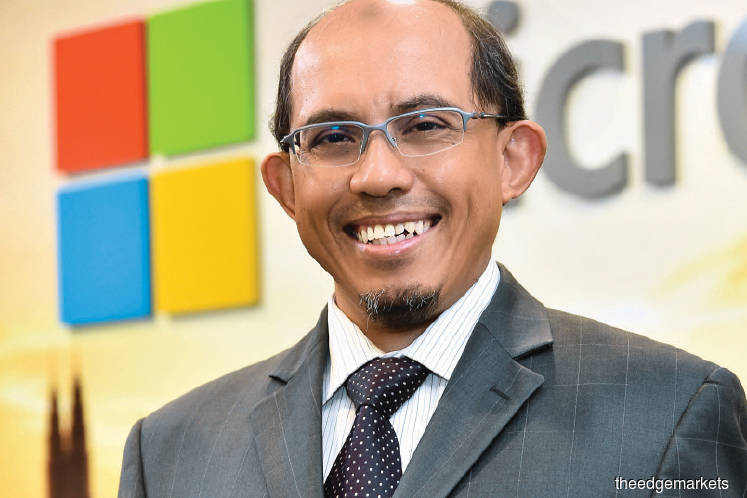 “Disruptive companies like Grab, Uber, Netflix and Airbnb were not large corporations. They were start-ups with innovative business models, enabled by powerful democratised technologies such as hyper-scale cloud, data, mobile, social, IoT (Internet of Things), and AI (artificial intelligence),” Dzahar tells The Edge via an email exchange.

He adds that the software giant is committed to helping and enabling corporates in Malaysia to be successful, as seen by its collaboration with such brands as Doctor2U, Nandos, Celcom and even the Selangor government. These entities leverage Microsoft’s cloud-based AI services to enhance productivity and power business innovation.

“Locally, we have leveraged our AI technology and cloud platform to help several businesses. Celcom, for instance, leveraged Microsoft Azure to develop a humanised chatbot (named Emma & Clive) that is capable of instant responses and will be available to consumers 24 hours a day, 7 days a week.

“The Selangor government, similarly, leveraged Microsoft Azure to develop an app called COOL (Community Opinions On-Line), a digital initiative that allows citizens and communities to contribute to the state and its economy. Our technology has allowed them to create fully functional AI chatbots that help create better experiences for users,” Dzahar says.

On how ready Malaysian corporates are to adopt cloud technology, he notes that IDC’s Study 2017 showed almost 50% are using cloud services beyond one or two simple applications, and all have some sort of cloud adoption plan.

Microsoft’s Digital Transformation Study earlier this year also showed that 85% of organisations in Malaysia are in the midst of digital transformation, which, by definition, includes the adoption of cloud technology.

“This indicates to us that businesses in Malaysia realise the need for cloud solutions. The country is also ranked 8th in Asia on the Cloud Readiness Index in 2018. More and more businesses are looking into cloud technology, so much so that there are reports that suggest cloud investment in Malaysia could touch US$900 million (RM3.73 billion) by 2020,” he says.

While interest in cloud adoption appears to be on track, Dzahar says Malaysia still has some way to go when it comes to fully leveraging AI technologies compared with developed countries.

“To be fair, the application of AI-related technologies is still in its infancy, but many believe in the potential of this disruptive technology and hence big vendors, venture capitalists and academia are competing to develop these further,” he notes.

One of Microsoft’s objectives in Malaysia is to develop data science and AI skills among the country’s workforce, he says.

“Our platforms and curriculum have helped one university turn around its AI Computer Science degree electives from being one of the most feared options, attended by only a few students, into one of the most popular programmes.”

Dzahar adds that Microsoft is currently exploring ways to introduce the complex but interesting topic into other disciplines as well as at the secondary school level.

Early this year, Microsoft launched the Digital ILKBS (Institut Latihan Kemahiran Belia dan Sukan) in partnership with the Ministry of Youth and Sports, which allows access to all learning tracks under Microsoft Imagine Academy, a programme designed to help academic institutions train and certify students and educators on Microsoft products and technologies.

Dzahar believes some of these initiatives will help the country prepare for a future that will be dominated by AI and cloud technology.

A world dominated by US, China tech

Microsoft is not losing sleep over its status as an American company despite the rising influence of Chinese tech players in Southeast Asia, including Malaysia. It believes Malaysia will work with any country, including China, the US and others, amid growing tension between the world’s two largest economies.

Dzahar also believes Microsoft could play to its strength as a global player in the industry.

“Microsoft’s developments in the field of cloud and AI allow us to provide services to smartphone companies, for instance, allowing us to collaborate even with Chinese companies to help develop their products.

“Companies like Xiaomi, Lenovo and Huawei are a few examples of Chinese companies we have collaborated with to help develop their products. Additionally, last year, we launched a new version of Windows 10 specifically for the Chinese government, fostering our relationship with China and, in turn, with Malaysia,” he says.

On the cloud space globally, Microsoft is ranked second with 13% market share, behind Amazon at 33%, as at the first quarter this year. IBM is third with 8%, followed by Google and Alibaba with 6% and 4% respectively. US technology players remain dominant in the global cloud space despite Alibaba Cloud having close to 50% market share in China in 2017.

“For Microsoft, your data is yours and we are committed to providing services that will protect your data with best-in-class security, privacy compliance and transparency commitments. The market today requires intelligence to run in the cloud as well as the edge to meet regulatory and performance requirements,” he says.