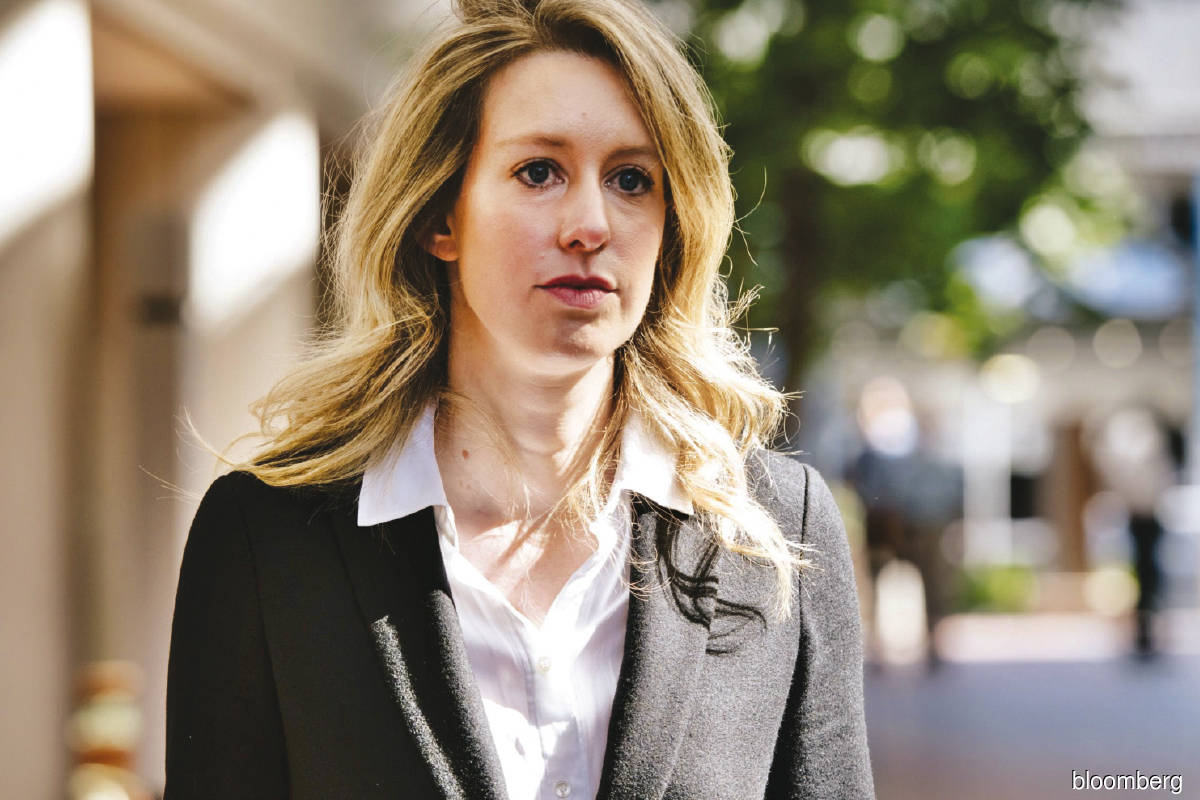 REGULAR readers of my Tech column might recall a piece I wrote three years ago titled “The rise and fall of Elizabeth Holmes and Theranos”, chronicling the collapse of the controversial blood-testing start-up that went from a healthcare hero worth US$9.6 billion (RM39.8 billion) to zero after it was found to be an elaborate fraud. In the eye of the storm was the blonde, baritone-voiced founder Holmes, who dropped out of Stanford University at 19 to launch the most audacious biotech start-up in history, and her then lover, mentor and deputy, Ramesh “Sunny” Balwani.

Three years after Theranos Inc began winding down its operations, Holmes, 37, is finally having her day in court. On Aug 31, jury selection began in the San Jose federal court, where Holmes, who at the height was personally worth nearly US$5 billion, faces 10 charges of wire fraud and two of conspiracy. The prosecution alleges that she deliberately misled investors and patients about the capabilities and accuracy of Theranos’ blood-testing devices. (Former Theranos president Balwani, who has since split up with Holmes, will be tried separately in January.)

Also in the courthouse will be Holmes’ one-month-old baby boy. The one-time Silicon Valley “golden girl”, who was briefly the US’ youngest self-made female billionaire, last year secretly married 27-year-old mega millionaire William “Billy” Evans, heir to the San Diego Evans Hotel Group empire, and had a baby while awaiting the trial. Indeed, the trial had to be postponed for several weeks in view of her advanced pregnancy. If you read US tabloids on the internet, you might find references to Holmes’ marriage being her latest scam, and the birth of a baby just as the trial was about to begin dubbed a “conniving” public relations ploy to “soften” her image.

As a journalist, I would never  assume anyone is guilty before they have had their day in court even as I lay out the facts of the case to my readers. The way I see it, until a jury decides otherwise, Holmes as well as Balwani are innocent and deserve a fair trial.

The criminal fraud trial, which is expected to last for up to 13 weeks, has been dubbed Silicon Valley’s “Trial of the Century”. At stake is not just Holmes’ innocence but the “fake-it-till-you-make-it” culture of tech start-ups that imitate confidence, competence and an overly optimistic mindset to fast-track ventures that lack viable business models and just keep raising money until they stumble on something that might satisfy investors. If Holmes and Balwani are indeed convicted, Silicon Valley’s venture capital ecosystem may never be the same again.

Holmes, who had a penchant for wearing the signature black turtleneck of Apple Inc co-founder Steve Jobs, was a poster child for successful entrepreneurial young women in technology. Her image adorned magazine covers. When the first media stories doubting the effectiveness of her blood-testing machines appeared, she blamed overzealous journalism. “This is what happens when you work to change things,” Holmes told CNBC TV anchor Jim Cramer in an interview on the day a particularly scathing story on Theranos’ blood-testing process appeared in The Wall Street Journal in 2015. “First, they think you’re crazy. Then, they fight you; and then, all of a sudden, you change the world.”

Yet, her “revolutionary” blood tests made no sense to specialists. Blood testing has long been the holy grail of modern medical science. Nearly 70% of all decisions made by doctors are based on blood-test results. What Holmes was proposing was that all blood tests, however sophisticated, could be done with just a few drops of blood, replacing the age-old practice of drawing several vials of blood with hypodermic needles. With no training in medicine or sciences, the 19-year-old college dropout was proposing a full range of blood tests from a mere drop or two of blood from a single finger prick.

Essentially, Holmes was faking most of the blood tests. Theranos machines could perform only 12 blood tests from a menu of nearly 250 tests. The remaining 238 tests were run on commercial blood analysers made by competitors. Moreover, because it extracted only a drop or two of blood from patients, no machine could accurately test the blood samples, which forced Theranos to modify the tests by diluting the blood sample to create more volume. One patient was told she was HIV-positive when a subsequent test at another lab proved otherwise. Several women who were not pregnant were told they were, and some who were actually pregnant were informed that they were not. Imagine the psychological trauma some of those patients went through. Some of them have agreed to be witnesses in the trial.

For her part, Holmes is likely to adopt what is known as the “Svengali Defence”, a long-shot legal tactic that portrays the defendant as a pawn in the scheme of a greater, and more influential, criminal mastermind. Svengali was a manipulative voice coach in George du Maurierthe’s romantic novel Trilby, who seduces, dominates and exploits a young Irish girl and makes her into a famous singer. The name Svengali has since become synonymous with an authority figure or mentor who exerts undue, usually evil influence over another person. Since she split up with Balwani four years ago, Holmes has pushed the line that she was merely a puppet in a conniving game of deceit, with Balwani pulling the strings.

In her defence, Holmes is likely to argue that during the period in which the government alleges she committed a massive fraud, she was in a decade-long controlling relationship with Balwani, who is 18 years older than Holmes. In court filings last year that were only recently made public, Holmes argued that she suffered from depression, anxiety, post-traumatic stress disorder as well as Intimate Partner Abuse syndrome, as a result of her relationship with Balwani. Holmes claims the abuse by him was “psychological, emotional and sexual”.

In the court filing, she has accused her former lover of verbally disparaging her, withdrawing “affection if she displeased him”, controlling what she ate, how much money she could spend, when she slept, how she dressed — indeed, even who she could interact with, “essentially dominating her and erasing her capacity to make decisions”. Among other things, she accused Balwani, a scion of a Sindhi textile merchant family, of throwing sharp objects at her, restricting her sleep, and monitoring her emails as well as instant messages on her smartphone, “and insisting that any success she had was because of him”. For his part, Balwani has denied that he engaged in “any abuse at any time”.

Did she intentionally mislead investors about Theranos technology or believe her own lies or was she manipulated by Balwani? Her lawyers will argue that, in the Silicon Valley start-up business, almost everyone exaggerates, and venture capital investors are not looking for a bean counter but a visionary who can use the reality distortion field to turn an idea into a money machine someday. They are hoping a Silicon Valley jury whose friends and relatives have at some point worked at a start-up will be sympathetic.

The charges against Holmes carry a jail term of up to 20 years. Given the fact that she is a new mother and allowing time for good behaviour, lawyers believe that, even in a worst-case scenario, she is unlikely to serve more than a few years in prison.

Silicon Valley insiders say the outcome of the trial is likely to affect how much leeway young founders, particularly women, will have in the start-up world. Holmes was hailed as a pioneering young female founder who broke the glass ceiling and showed the way for millions of young women in engineering and technology, a field until recently seen as the sole domain of men. Since the collapse of Theranos, however, women founders, particularly in biotech and healthcare start-ups, have been compared to Holmes. Investors often ask female entrepreneurs to prove that their venture is not another Theranos. Far from a role model, Holmes is now seen by female entrepreneurs as a cautionary tale.

So, what’s next? Holmes has a long life ahead of her, whether or not she is convicted and does end up serving a few years behind bars. Guilty or not, Americans believe in second chances. Almost everyone I have talked to in recent weeks has said surely there is a second act in the long-running Holmes saga.

Clearly, she is charismatic and incredibly talented and persuasive. If she could sell the “Nothing Burger” Theranos story, she can sell just about anything. So, will the charismatic founder of Theranos someday end up running another company long after the disastrous blood testing start-up is forgotten and forgiven? Few are betting that she will retreat to become a suburban California housewife and raise heirs to the Evans Hotel empire.

Holmes’ current trial, which could last until end-November, and Balwani’s trial in January are likely to be just two more chapters in the long-running story of the charismatic blood-testing start-up’s founder. The final chapters of the story are still being written. A Hollywood movie starring Jennifer Lawrence as Holmes is already in the works. Once Balwani’s trial is over and after either one or both of them have served their time, perhaps Netflix or another streaming service might also want to look at hiring a screenwriter for a seven-part serial.

Greed, sex, crime and corporate malfeasance from boardroom to courtroom and bedroom — there is plenty of material for a gripping drama serial to binge-watch.