Tech: Breaking into the e-government space with parking apps 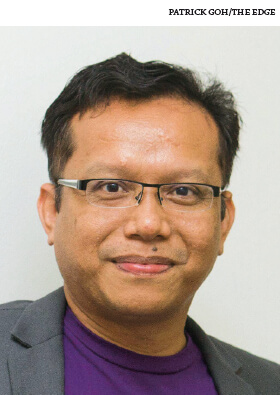 Nasir: These days, consumers will complain if they have to pay a surcharge ... In JomParking’s case, there are no additional charges

THE electronic government (e-government) space has been traditionally the domain of established players such as MyEG Services Bhd and Touch ’n Go Sdn Bhd. In recent years however, a growing number of smaller players have been venturing into areas where there has been a noticeable lack of progress.

Street parking managed by local councils such as Kuala Lumpur City Hall (DBKL), for instance, is in need of serious innovation as it still relies on the troublesome coupon system despite the rapid development of smart devices and apps.

This has attracted many smaller players offering new solutions, with apps such as Flexi Parking and JomParking eyeing a piece of the street parking market, estimated to be worth RM500 million per year based on the parking bays managed by over 140 local councils as well as private parking operators in the country.

As is the case of many innovations throughout history, an idea often stems from frustration. Leading Innovative Technologies and Systems Sdn Bhd (LiTS) CEO Lai Thiam Sin’s irritation with the bothersome coupon parking system was what spurred him to think of a better solution.

“Basically, the whole idea came from my frustration with the existing system. I was in Penang at the time and was scratching coupons, which I thought was very troublesome. I had so many coupons for each council that were just thrown away after use.

“Also, the whole process of street parking is such a hassle ... getting enough coins to pay for parking and then having to look for a machine before walking back to your car to place the coupon on your dashboard,” he says.

According to Lai, one of the challenges in coming up with an app like Flexi Parking is finding a profit structure — it is a balancing act as developers have to make it inexpensive enough for local councils and users to adopt the app but still maintain a decent profit margin to keep operations sustainable.

Flexi Parking first tried a profit-sharing structure but quickly found out that parking operators were not keen on the idea. It then opted for a flat-fee structure, charging users a fee of RM1 when they top up their wallets, regardless of the amount deposited.

That made it attractive for local councils to adopt the technology as they could do it for free while at the same time, see a reduction in their operating cost.

“As we only charge the RM1 fee, the local councils saw that they had nothing to lose by adopting our solution. They also get to save on costs as they don’t need to spend so much on printing costs for parking coupons and to pay agents,” says Lai.

“However, it didn’t look very good initially. When we started out with Sepang, the monthly income was only about RM60 per month due to the small size of the market. However, it served as a good proof of concept to show that our system worked.”

Since then, Flexi Parking has expanded to cover five local councils and is working on securing its sixth — the Petaling Jaya City Council (MBPJ).

Although the company is maintaining its RM1 fee model, Lai says it is already self-sustaining and is starting to see a profit. The company is considering renegotiating its existing agreements with the councils into a profit-sharing structure.

Another big player in the parking app space is the QR code-based JomParking solution by AppCable Sdn Bhd, which currently has the widest coverage with some 100,000 registered users.

Its profit structure is different from that of Flexi Parking. JomParking allows users to purchase tokens (100 tokens for RM1) that are used to pay parking fees. Users do not need to pay an extra surcharge to buy and use the tokens, as JomParking derives its income from the parking operator rather than the users.

“These days, consumers will complain if they have to pay a surcharge, for example, those who use Touch ’n Go. In JomParking’s case, there are no additional charges,” says AppCable founder Muhamad Nasir Habizar.

He says as the fees charged are minimal, parking operators do not mind paying for the solution, and are positive about it as it reduces overall operational costs.

JomParking is not yet a profitable venture but Nasir notes that most start-ups in the technology scene take at least three to four years before turning a profit.

Meanwhile, AppCable is working on adding a new revenue stream — advertising income. It plans to work with other transport-related businesses to promote their services on JomParking.

The company is also in talks with vehicle battery service provider Bateriku.com so that users can potentially get their cars serviced wherever they are parked by using the app.

Besides monetising the app, another big hurdle faced by parking solution providers is dealing with different local councils for each new area they are eyeing.

The app can also be used in certain locations, including TSI Sports Arena and Cybersquare in Cyberjaya, and was recently implemented at the light rail transit station at Putra World Trade Centre.

While the feedback has been positive and adoption has increased since the app was launched two years ago, Nasir says getting various local councils on board is still the major obstacle in securing new sites.

It took two years, for example, before DBKL implemented the solution, mainly because of regulatory issues. On the other hand, it just took one week for the app to be implemented in Iskandar Puteri.

Besides the red tape in setting up meetings with local councils, Nasir says delays are often caused by the need to amend the relevant legislation to cater for electronic payment. Other issues, such as when a council has already tied up with another operator, will also slow down the process.

Overall, however, the city councils are receptive to the solution as they can also get data and online reporting on collection and user statistics, which are vital for city planning.

DBKL, for example, will be able to tell which areas are “hot” and have insufficient parking, and can then decide whether to increase the number of bays or set up multi-level parking centres, says Nasir.

Besides that, the data also assists in traffic control.

Looking ahead, Nasir says the company aims to expand JomParking’s user base to 500,000 users and to cover street parking in all local council jurisdictions in the country by year-end, before expanding to Indonesia and Brunei next year.

He says an initial public offering is a long-term target for the company, but that the company will have to start making a profit before a listing exercise can be considered.