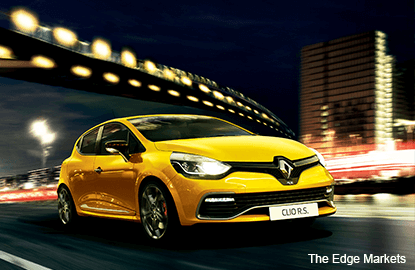 TC Euro is the sole franchise holder for Renault cars in Malaysia.

In a press release today, TC Euro's CEO Kuan Kim Luen said current prices would be maintained across the board, despite unfavourable foreign exchange that had impacted the cost of imported vehicles and components and led to higher production cost.

“While we are not immune to the challenges facing the automotive industry, we are happy to announce that there will be no price increase, despite the current economic environment.

"With forward planning, optimising operation efficiencies and cost management exercises conducted internally, we are able to manage the cost to consumers at this point,” Kuan said.

Currently, the locally-assembled Renault Fluence Expression is retailing at RM108,888 in Peninsular Malaysia, while Renault’s most expensive offering, the fully-imported Megane R.S. 265 Cup, is priced at RM234,888.

Kuan said the complete built up Megane R.S. 265 Cup was imported from Spain.

The ringgit has weakened against major currencies. At 12:40pm, the ringgit was traded at 4.3770 against the US dollar, according to Bloomberg data.

The ringgit had weakened from the strongest level at 3.5382, over the last one year.

Against the euro today, the ringgit depreciated to 4.7610, from the strongest level at 3.8567 seen over the last one year.