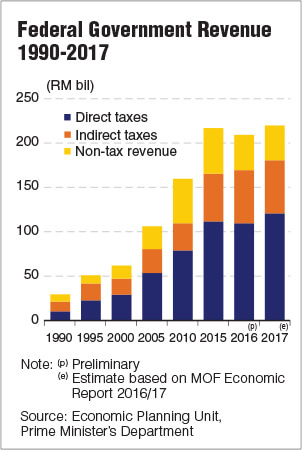 KUALA LUMPUR: The authorities, namely the Inland Revenue Board (IRB) and the Royal Malaysian Customs Department, are seen to step up efforts to collect more taxes next year as the federal government strives to meet RM239.86 billion in revenue collection for 2018, say tax experts.

“This year, the IRB is expected to collect RM127 billion from income tax and approximately RM60 billion is expected from customs, of which RM42 billion is from the goods and services tax (GST),” he told The Edge Financial Daily.

“Already, for the IRB to try to collect the RM127 billion for 2017 is going to be tough. If they intend to collect more in income taxes next year, the consequence is that the revenue authorities are going to be strictly applying the law and more audits will occur. There is expected to be stricter application of penalties and there is going to possibly be more disputes with taxpayers.

“[In a nutshell,] the application of the tax regime is going to be tougher in order to raise the revenues. I think it will be a rigorous implementation of the existing laws by both the IRB and customs [and] there will be greater scrutiny of taxpayers by both authorities,” he added.

Thanneermalai is of the view that it will be tough for the IRB to repeat the RM127 billion target in 2018 due to more incentives being given away, as announced by Prime Minister Datuk Seri Najib Razak in Budget 2018 last Friday.

“Budget 2018 did not reveal many tax incentives, but some notable ones were that four- and five-star hotels be given extended tax incentives until Dec 31, 2020. Tourism projects have also been extended and accelerated capital allowances are given to manufacturing services equipment,” he noted.

“From what I’ve analysed, approximately 43% out of the RM239.86 billion Budget 2018 revenue collection should come from direct taxes which include petroleum taxes and about 23% of that would come from indirect taxes such as the GST and import duties.

“So, we are looking at direct and indirect taxes making up about 66% of the total revenue collection. This suggests that the enforcement and tax collection will need to be stepped up, without a doubt,” said Chelliah.

“Certainly, collection efforts will be on an increase. It’s a question to what extent will the tax authorities go,” he added.

However, Chelliah said tax collection efforts by the authorities should not disrupt the operations of businesses.

“The business community should not be negatively impacted, be it foreign companies operating in Malaysia or local players who are trying very hard to generate wealth for the economy.

“As it is, business owners have got enough challenges. What they don’t need is over-regulation and overzealous collection efforts by the IRB and customs,” he added.

Although Budget 2018 announced a reduction in personal income tax, there was none given for corporate tax.

“The government’s focus in these strategic sectors are laudable as the current strength of the ringgit and the relatively low cost of business in Malaysia have made these sectors more competitive.

“Perhaps some incentives should have been granted to the education sector as well, which has the potential to export more of its services,” he said.

PricewaterhouseCoopers Malaysia senior executive director Jennifer Chang opined that corporates were not “left out” in Budget 2018.

AffinHwang Investment Bank Bhd chief economist Alan Tan opined that the revenue collected from direct taxation, such as personal and corporate income taxes, is dependent on economic performance of the country.

“Therefore, while the government is projecting an improvement in the fiscal deficit to 2.8%, the downside risk to that is an unexpected slowdown in the global economy, which will have a negative impact on direct taxation.

“The good thing is that GST collection is expected to improve from RM42 billion to about RM44 billion next year, and the government is also projecting better global oil prices, in which case they are expecting an average of US$52 (RM220.48) per barrel. Thus, petroleum-related revenue is expected to improve going into 2018,” he said.

According to Reuters, oil prices jumped about 2% last Friday, with global benchmark Brent crude rising above US$60 per barrel. This was due to support from among the world’s top producers for extending a deal to rein in output and as the US dollar retreated from three-month peaks.