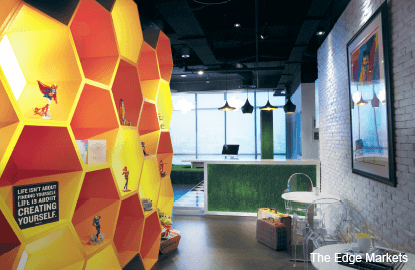 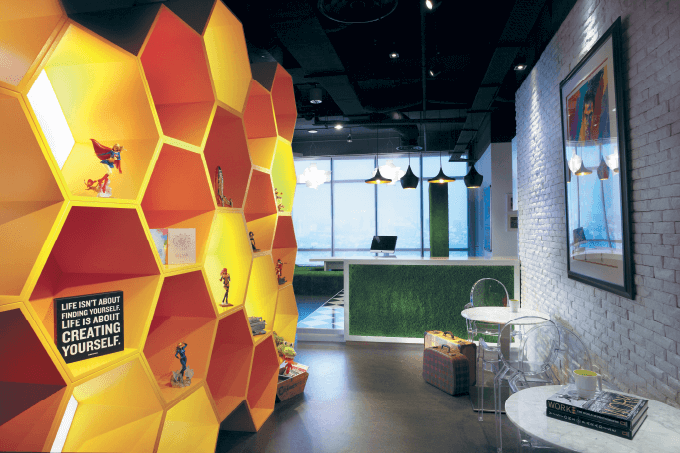 WITHIN Menara UOA Bangsar sits one of the most fascinating office spaces in Malaysia — that of Mindvalley, an incubator and developer of businesses that innovate on self-improvement. It is essentially a 21st-century enterprise, offering services such as digital publishing and the development of education technology, mobile apps, content and events, to further enhance companies that deal with self-help and motivation.

Founder and CEO Vishen Lakhiani established the company in 2005, working out of a house with a team of seven. Today, the company is 200-strong, comprising more than 35 nationalities, whom its leader describes as innovators, artists, technologists and dreamers. Vishen is seen as a pioneer who uses talent branding and “consciousness engineering” to groom and attract talent, and has invested money and time to create a workplace that reflects these philosophies and inspires its inhabitants. 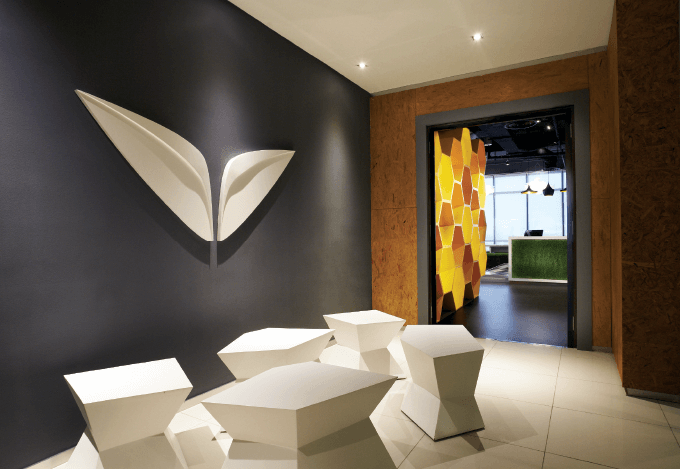 On its website, the company is described as a provider of “self-improvement for the mobile generation”. The mission statement: “We believe that extraordinary is an aspiration instilled within each and every one of us. We just need to be encouraged to unleash that potential, so we can eliminate limiting beliefs that are hindering us from pursuing our dreams and adopt a powerful mindset that unlocks a life that we are truly capable of living.” This goal takes its cue from a philosophy by scientist and futurist, Buckminster Fuller, who said, “You never change things by fighting the existing reality. To change something, build a new model that makes the existing model obsolete.”

As the company grew, Vishen decided it was time to invest in a proper headquarters. The company had been recognised as WorldBlu’s Most Democratic Workplaces from 2008 onwards and needed the space that reflected that. Having found 6,000 sq ft at Menara UOA Bangsar, he engaged PDI Design + Associates to help realise his vision.

PDI designer Ian Lee says, “Vishen wanted the space to reflect the company’s values and beliefs, and its diversity. One of its core values is: Happiness is the new productivity. You can see bright colours, as well as superhero references, all incorporated into the spaces to encourage that.

“Vishen started his company at a time when Malaysia was suffering from brain drain, and Vishen wanted to create a company that could reverse this process. He wanted to attract people from overseas here. And when he came to PDI, he said, ‘Hey, I’ve got this problem; now you have the free hand to solve it’.

“PDI is unique in that we use Neuro-Linguistic Programming (NLP) in our interior design, and it was through the Mindvalley project that we really delved into interior spaces that communicate with the subconscious. It involves the study of body language, how the mind works, the subconscious, and how to connect with generations X, Y and Z. There are colours and shapes, which are basic ID, but we also look at how to encourage people to use the space, how to make them walk a certain pathway, and how to create spaces where people can come together or ‘accidentally’ meet so they can talk, share and exchange ideas.” 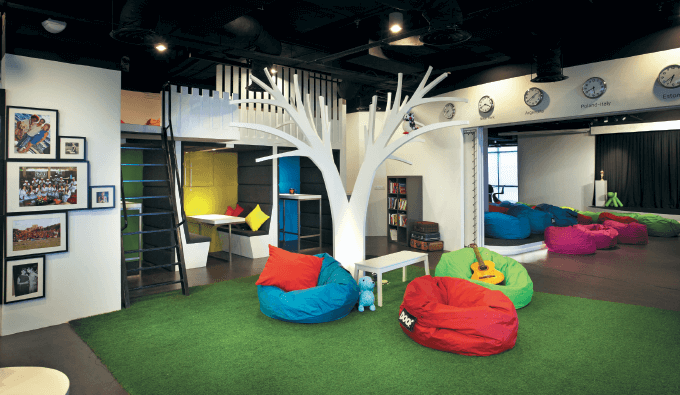 The experiment, led by PDI managing partner Tan Sucheng, was completed in 2010. Beautiful, modern and timeless, it boasts open communal spaces, organic layouts and textures interspersed with sci-fi shapes and bright, solid colours. An almost life-size figurine of Wonder Woman, the unofficial Mindvalley mascot, stands tall in the reception area. Superheroes are a symbol of empowerment, where people step up to do great, extraordinary things, and you’ll find plenty of references to them throughout Mindvalley’s various spaces, be it in the murals on the walls or random words of inspiration. Wonder Woman is the most celebrated because a majority of the staff is female — the company is powered by females, in fact.

In 2013, Vishen came calling at PDI again, as Mindvalley was expanding. This time, Lee took the lead in design, with Vishen’s blessings to take it up a notch. The result was Level 29, also known as the Hall of Awesomeness. At first sight, it is obvious that this is quite a quantum leap from the first phase.

The idea was to build on a town hall kind of atmosphere, with a lot of collaborative spaces. When this space was launched, so was Mindvalley’s new, updated logo — a pair of wings, a symbol of empowerment. Set up against the wall at the entrance, where there is a waiting area with five white cubist stools, the wings are placed in a way so visitors can take fun pictures in which they look like they have wings. 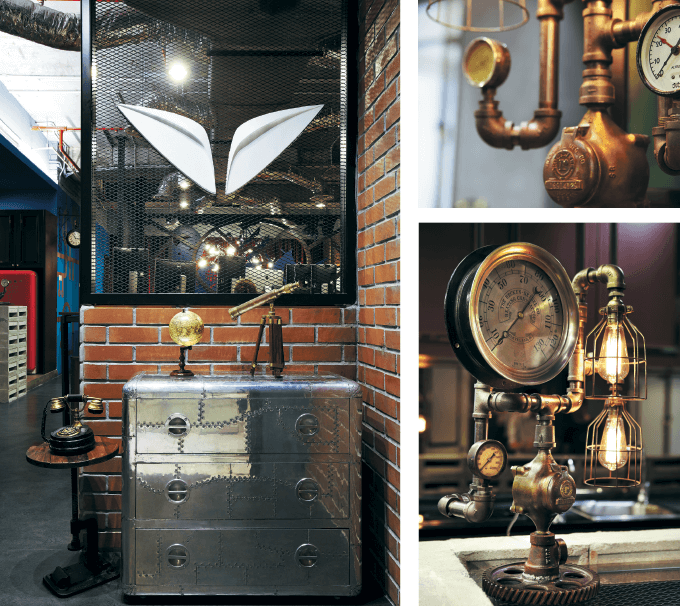 Turn right, and you’re greeted by a set of honeycomb shelves — busy as a bee, the unity of a hive, it’s really up to your interpretation. On the shelves are various comic superhero figurines and paraphernalia. A gorgeous work of art of Muhammad Ali, signed by the artist and the subject from the CEO’s personal collection, takes pride of place on the wall opposite the shelves. Moving along, there’s a small pantry with a French theme (complete with a black-and-white tiled floor) to the right and a window-side banquette upholstered with Astro Turf.

Around the corner, you’ll find the workspace — a cluster of work desks to the right, an open area with a big white tree and Astro Turf on the floor, where people can sit on the “grass” if they wanted. There’s a tree house up a ladder for a cosy gathering of the minds; beneath it are four cubicles with sound-dampening walls, for groups of up to four to convene or for individuals looking for a more private space to work. Some offer seating, some offer high tables for those who prefer to work on their feet. Opposite these is the Jedi room, where the seating is inspired by the Jedi Council in Star Wars.

At the heart is the Hall of Awesomeness, an auditorium with a capacity for 150 guests with a speaker stage, customisable seating with beanbags, a built-in sound system, a backstage room and a kitchen space for catering. Every week, a variety of events and meet-ups are held because, Vishen believes, “When smart people come together, they multiply each other’s potential.”

Free form would be the best way to describe the layout of Level 29. The design enables the employees to sit and work however, wherever and whenever they want.

Says Lee, “To me, it’s a space where even if you’re shy, you can still get around it. But to make full use of the space, one has to completely let go of one’s ego and inhibitions. It’s a very social space. Even if you’re an introvert, it could encourage you to come out of your shell a little bit too.”

Six months ago, the third phase of Mindvalley’s spatial expansion was completed. This project, although smaller than the first two phases, is a little bit more dramatic in its look and feel. When meeting with Vishen, PDI designers always ask, “What’s the big plan this time?”

The new space was for the IT and tech team, 25 people in all. Vishen’s request this time was more of a theme than a concept — steampunk, the sci-fi subculture that incorporates technology and aesthetics from 19th-century industrial steam-powered machinery. Think of Jules Verne’s epic tales and Alan Moore’s League of Extraordinary Gentlemen. Originally nicknamed Nautilus Chamber, the tech department is visually stunning. Walk through its main doors on the 35th floor of Menara UOA Bangsar and you’re transported to another place and time, it is almost like a movie set. Lee says he took quite a lot of cues from the video game BioShock Infinite. The steampunk palette is brown leather, bronze, copper and steel pipe. The counter in the pantry is made with concrete bricks and matched with wooden cabinets with steel trimmings finished in a rose gold tint. The feature wall that separates the workstations from a small conference room is a magnificent piece of metalwork, custom-made based on a sketch by Lee. It is a skeletal outline of a pirate ship, a sea monster, a submarine — basically, images that look like they had come straight out of a Jules Verne novel. Perpendicular to this is another centrepiece — a world map that doubles as a whiteboard.

Lamps were specially ordered from Machine Age Lamps, a company that specialises in turning scrap into sculptural lighting. On a trip to Europe, Vishen found time to shop for steampunk paraphernalia, including leather goggles that now serve as props in a meeting room. A mannequin dressed in theme stands in the conference space as part of the décor.

“As a client, Vishen is extremely dedicated, and we look forward to working with him every time,” says Lee. “Every time I come back to Mindvalley, I see how the space has evolved, in terms of how the staff use and decorate it. It is a diverse work environment, and with so many cultures here, you have a multitude of expressions that imprint themselves on the blank canvas we’ve provided. It’s great to see how they interact with the space, and the change has been really organic. Mindvalley’s spaces enable the people actually using them to dictate how they want to use them.”

Mindvalley remains a WorldBlu-certified Most Democratic Workplaces, one of Inc. magazine’s World’s Coolest Offices, and is endorsed by the US-based Great Place To Work Institute.