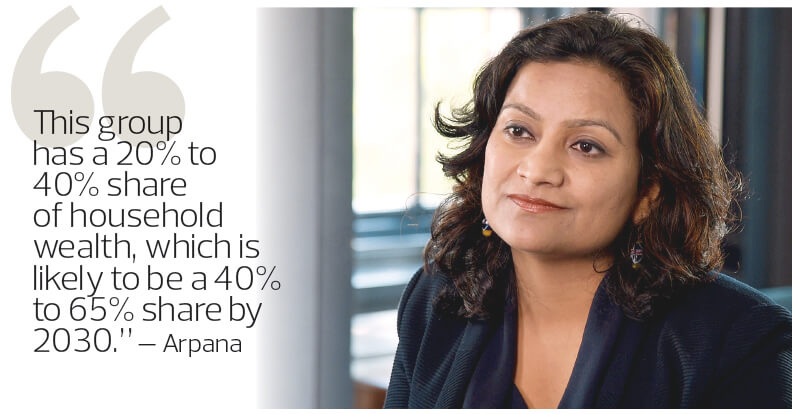 CONSUMER companies targeting Southeast Asia would do well to zero in on the region’s mass affluent, a segment of some 57 million people that is growing faster than the middle class.

A new Boston Consulting Group (BCG) report finds that, because of the region’s rapidly developing economies, tens of millions of people from the middle class are moving up fast into the ranks of the mass affluent — an income segment that controls up to 40% of the region’s household wealth despite comprising only 10% of its population.

BCG projects that by 2030, the ranks of the mass affluent will reach 136 million, or 21% of the population, replacing the middle class as drivers of growth and creating vast opportunities for consumer product companies.

“I think the mass affluent is a key segment for more consumer companies to think about, whether they are involved in food and beverage (F&B), banking, retail, luxury, consumer healthcare or accessories,” Aparna Bharadwaj, a partner who leads the firm’s Center for Customer Insight (CCI) and BCG’s marketing, sales and pricing practice in Southeast Asia, tells The Edge in an interview.

She is also the author of the BCG report that was released last Tuesday, titled Beyond the ‘Crazy Rich’: The Mass Affluent of Southeast Asia.

Aparna believes it is important for virtually all — not only luxury — consumer product companies to pay attention to the mass affluent.

“Companies that have ‘masstige’ (mass prestige) or premium offers should pay close attention to this market. But even mass market companies could have compelling propositions for the mass affluent because we are talking about a highly accessible market, not the high-net-worth individuals. Given this group has a 20% to 40% share of household wealth in Southeast Asian countries, which is likely to be a 40% to 65% share of wealth by 2030, they are a large and highly significant market for most categories.”

As it stands, the mass affluent are already an important market. They account for roughly half of all spending in categories such as leisure travel, watches and cars across the region.

Companies that understand how to appeal to the mass-affluent consumer in Southeast Asia can seize competitive advantage in “one of the world’s greatest emerging mega markets”, says Aparna.

For the report, BCG’s CCI conducted a survey of about 6,000 affluent consumers and did ethnographic qualitative research in six major Southeast Asian countries, namely Singapore, Malaysia, Thailand, Indonesia, Vietnam and the Philippines.

BCG defines “mass affluent” as consumers with the incomes and the intent to sharply increase their acquisition of premium and luxury products. They represent the top tier of income earners in the respective countries — usually the top 5% to 10%, depending on the market. BCG also calibrated across countries based on purchasing power and cost of living.

“Often, purchase patterns were better measures of the mass affluent than only the stated income because consumers often understate incomes and in each market, income levels represent different purchasing power,” Aparna explains.

Who the mass affluent are

It turns out that Southeast Asia’s mass-affluent market is far more nuanced than the lavish spenders and high-net-worth individuals portrayed in the recent hit movie Crazy Rich Asians.

Most are also young, aware of international trends and digitally engaged.

Among the BCG report’s key findings are that more than 90% of the mass affluent acquired their wealth as salaried professionals or by running businesses; only a small minority inherited their wealth.

Nearly two-thirds are under 40 years of age, and three-quarters rose up from the middle class within the past 10 years. Although they are starting to buy luxury goods, many are still in the process of trading up to premium products in categories such as personal care, F&B and footwear.

“So, these consumers are relevant not only for luxury brands, such as Chanel and Diageo, but also for companies such as Johnson & Johnson, Procter & Gamble, Heineken and adidas,” the report states.

BCG notes that the buying propensity of the mass affluent also tends to be more stable than that of the middle class during times of economic volatility.

The mass affluent seem to be more digitally engaged than the other income segments. For example, 59% of affluent Thais and 88% of affluent Filipinos actively use digital channels during the shopping process.

Interestingly, the affluent take 12 international trips a year on average. And, they buy more than 40% of their cosmetics, watches and skincare products while travelling.

Also, a remarkably high proportion of Southeast Asia’s mass-affluent consumers share similar values and preferences, even though they remain separated by language, culture and distance. This may largely be due to their frequent travel and social media use.

“We were quite surprised to see how relatively homogenous the mass-affluent consumers are. The middle class, for example, are very different by markets and carry a strong country influence in their preferences, shopping behaviour, choice of brands and attitude towards price. In contrast, the mass affluent have similar preference on many dimensions. For example, they overwhelmingly prefer exclusive or limited edition products, they usually plan their luxury purchases and they care about quality and not just brands. This means that they are very amenable to a pan-regional strategy [by consumer companies],” says Aparna.

“Unlike the middle class, they do not always require a country-by-country strategy. They are well-travelled consumers and have formed their views by moving across geographies and markets,” she points out.

What companies should do

Based on the findings, Aparna offers some advice for how consumer companies can pursue the mass affluent in Southeast Asia. She says companies should develop a regional strategy, use digital channels and target travellers. They must also set a “premiumization” journey of their products.

“Many companies still focus on driving penetration or new usage for their brands in Southeast Asia. They think that is the primary way to grow the pie. The truth, however, is that premiumizing and upselling is a key growth lever now with the mass affluent. Brands need to think about how they are providing an accessible price ladder to their consumers — from mass to masstige, to premium and prestige,” she says.

Aparna notes that travel retail is a channel that companies — beyond those involved in perfume, liquor and fashion — need to think about.

“In some categories like watches, jewellery and fashion wear, the mass affluent make about 40% of their purchases when they are overseas. Companies need to think about targeting these consumers not just in their home markets but also in key travel hubs such as Hong Kong, Seoul and Japan.”

More importantly, Aparna says companies must not lose sight of the fact that because the mass-affluent segment is growing faster than the middle class in many Southeast Asian markets, the wealth gap remains wide and rising inequality can lead to social backlash over time.

“Companies need to do their bit to give back to the societies they operate in, invest in relevant social causes and make social enterprise front and centre to what they do. This is a key point for companies to consider,” she adds.