Taman Medan church has to decide if cross should be reinstalled, says Wan Junaidi 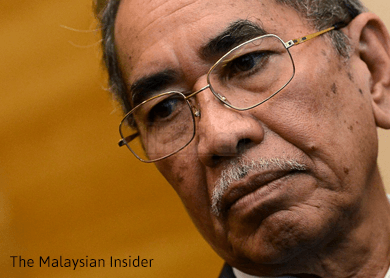 (June 9): Local sentiment in Taman Medan, where a church was forced to remove its cross following a protest recently, may not be conducive towards reinstating the Christian symbol, said Deputy Home Minister Datuk Seri Dr Wan Junaidi Tuanku Jaafar.

Malaysiakini reported that Junaidi, in replying Petaling Jaya Selatan MP Hee Loy Sian during the adjournment speech in the Dewan Rakyat last night, said he was not sure if the matter and the emotion in Sarawak, where he was from, differed from the peninsula.

"I am from Sarawak. If this happened there, I will say 'yes', you can put it (the cross) back," he was quoted as saying by Malaysiakini.

He was also reported to have said the church would have to use its best judgment if it intended to put back the cross.

"You have to observe the sensitivities of the environment," the Santubong MP was quoted as saying.

Hee had asked the deputy home minister to state whether police could guarantee the safety of the Taman Medan church if it decided to place the cross back on its building.

"The police will make sure the safety of the people and assets are safeguarded and ensure the people profess their religious freedom as enshrined in the Federal Constitution," he was reported as saying.

Wan Junaidi also warned so-called activists against championing the cause of only one race and disregard the sensitivities of others.

"They (the Taman Medan residents) started it (the protest). If the people were tolerant, then this thing wouldn't have happened," Wan Junaidi was reported as telling reporters outside the Dewan Rakyat last night.

On April 19, a group of 50 Muslim residents from Taman Medan protested in front of the shop lot where the house of worship was located and demanded that the cross affixed to the building facade be taken down.

They said the cross was a challenge to Islam and would sway the faith of youth in the area. The church, later identifies to be the Community of Praise Petaling Jaya Church, then decided to remove the cross that same day for safety and security reasons.

Among the protesters was Inspector-General of Police Tan Sri Khalid Abu Bakar's brother, Datuk Abdullah Abu Bakar, who said he was there to help calm the situation.

Home Minister Datuk Seri Ahmad Zahid Hamidi in a written reply to DAP parliamentary leader Lim Kit Siang had said that police were investigating the case for attempted intrusion into a building.

Following the incident, Selangor Menteri Besar Mohamed Azmin Ali said that the church should put back the cross on the building's facade as it was the symbol of Christianity.