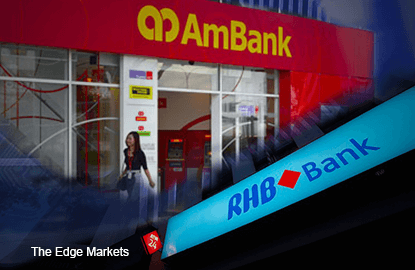 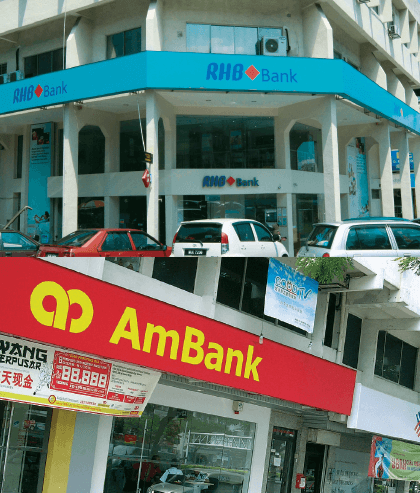 DISCUSSIONS about a potential merger between mid-sized lenders RHB Capital Bhd and AMMB Holdings Bhd have been put on hold due to the current political headwinds, sources say.

A merger of the two would create the country’s third largest banking group by assets — behind Malayan Banking Bhd and CIMB Group Holdings Bhd — and the sixth largest in Southeast Asia.

“The plan was to merge the two groups in a share swap valued at about US$10 billion, under which RHB (fundamental: 1.50; valuation: 2.10) would be the acquirer. The banks’ common major shareholder, the Employees Provident Fund (EPF), would have emerged as the biggest shareholder in the enlarged entity,” a source familiar with the matter tells digitalEdge Weekly.

At US$10 billion, it would have been the largest M&A deal in Southeast Asia this year.

Interestingly, it was CIMB Investment Bank that had mooted the merger some months ago and it had been advising the two banks on it, the source says. “There were high-level talks, the key shareholders of the banks were consulted and seemed supportive but then a few weeks ago, it was decided that with the current political headwinds, this was not a good time to propose a merger.”

On July 2, The Wall Street Journal created a stir when it reported alleged transfers of up to US$700 million from entities linked to embattled state-owned 1Malaysia Development Bhd to two bank accounts within the AMMB group under Prime Minister Datuk Seri Najib Razak’s name. Najib has denied taking the money for personal gain and has categorised the allegations as political sabotage.

A special task force is now probing those allegations.

Industry sources say although AMMB — the country’s fifth largest of eight domestic lenders — has long been viewed as a potential M&A candidate because of the possibility that its two largest shareholders may eventually exit, it is likely to want to lie low on any such activity for now.

The two largest shareholders in AMMB (fundamental: 1.50; valuation: 3) are Australia and New Zealand Banking Group Ltd (ANZ) with a 23.78% stake and founder and chairman Tan Sri Azman Hashim with a 12.97% stake held through AmCorp Group Bhd. The EPF owns 16.4%.

It was only in January this year that RHB, CIMB Group and Malaysia Building Society Bhd aborted their planned mega merger after six months of talks, citing unfavourable economic conditions and their inability to arrive at a value-creating transaction for all shareholders.

While it remains to be seen if talks on an RHB-AMMB merger will resume, a banking analyst says the two would actually make a good fit. This is despite there being a duplication of some of their businesses, especially on the investment banking side.

“The duplications may not really matter. Banks that embark on mergers these days are looking to derive cost synergies and are usually willing to sacrifice the first two years, post-merger, in the hopes that synergies will be realised later on,” the analyst says.

Industry observers point out that AMMB is strong in the hire purchase business, from which it derives good margins, while RHB has a slightly more solid small and medium enterprise banking business than AMMB. Merging the two would also create the largest asset management player in the country.

Late last year, there were rumours that Azman and ANZ were looking to sell their stakes in the bank. AMMB, in a bid to quash such speculation, released a press statement saying neither Azman nor the Australia-based ANZ was engaged in talks with other parties to sell their respective stakes in the group. However, the rumours persisted in the banking circles.

Later in December, Azman, 76, revealed in an exclusive interview with The Edge that he was keeping an open mind on a stake sale. He said it was something he had to think about as he got on in age, given that none of his children is in the business.

It is understood that he became even more hands-on in AMMB after group managing director Ashok Ramamurthy — an ANZ nominee — stepped down in April this year. The group has since appointed Datuk Azmi Mahmood as the acting group MD while Ashok has returned to Australia to take on a senior executive role at ANZ.

Research house UOB Kay Hian, in a July 15 report, notes that speculation about AMMB being a potential M&A candidate is not new with pricing potentially having been a key stumbling block in the past. “In spite of ANZ’s effort to transform the group, an increasingly challenging banking landscape — both from a regulatory and competitive standpoint — has resulted in the group’s ROE de-rating from a high of 14% in 2013 to its current sustainable run rate of 11%. This, in our view, could prompt ANZ to be more open and flexible on its valuation expectations of any potential stake sale.

“AMMB’s relatively small earnings contribution of less than 3% to ANZ’s group earnings base and Basel III punitive capital requirements and deductions on minority shareholdings have always been a key consideration underpinning ANZ’s potential stake disposal in AMMB, which we think will only intensify over time.”

As for CIMB Investment’s role in putting together a deal for AMMB and RHB, observers note this is not the first time it has initiated a mega deal for other parties. Back in November 2006, CIMB Investment initiated a mega merger of eight listed companies that were majority-owned by the Permodalan Nasional Bhd group and the EPF to create the world’s largest listed oil palm player. That merged entity became the Sime Darby Bhd group.

This is, however, the first time CIMB Investment is mooting  a merger of rival banking groups. Nevertheless, it has played the role of adviser in past banking mergers. In 2000, CIMB (then known as Commerce International Merchant Bankers Bhd) was the adviser in the merger of Public Bank Bhd and Hock Hua Bank Bhd.