Talking points: Design news from around the world 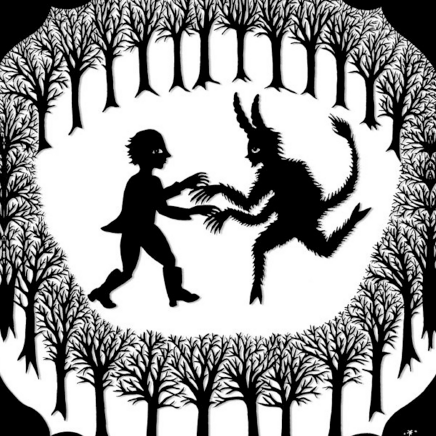 The Brothers Grimm were indeed appropriately surnamed, as far as their macabre stories go, with the likes of Cinderella, Little Red Riding Hood, Rapunzel and Sleeping Beauty all undergoing more cheerful adaptations to make them appropriate for children. Professor Jack Zipes wanted to adhere to the original gruesome theme of the stories and recently released a translated version of The Original Folk and Fairy Tales of the Brothers Grimm with exquisite illustrations by Andrea Dezso.

The Romanian-born visual artist is known for her compelling narratives fashioned out of delicately cut and layered black and white papers. For this project, she produced ink drawings that mimic this signature paper art style. The 20 illustrations and cover took three months to complete, each monochromatic scene playing on positive and negative space, as well as forms, shapes and shadows to eloquently portray the grim and gruesome stories.

“I chose tales to illustrate that gave me immediate, strong, clear mental images as I read them,” explains Dezso. “The scenes to be illustrated popped into my mind, often fully formed — like the whale rearing from the water with a man sitting in a tiny boat in front of it. I love tales that feature the devil or other non-human creatures, so that influenced my choices too.”

Italian designer Sandro Lopez made a splash as usual when his eponymous studio revealed its 2014-2015 collection. In keeping with Lopez’s penchant for thought-provoking and clean architectural designs, the collection of vases, stools, tables and lamps showcased interesting silhouettes using mostly marble, wood and glass.

Among the highlights are the Abito vases, which draw their name from the Italian word for “dress”. Lopez envisioned them as a way to “dress up” flowers, much the same way flowers dress up a space. Inspired by the use of transparency in fashion, he topped solid marble vases with clear glass coverings to subtly alter their silhouettes. “The vase is envisioned as a transient home for the flowers; one which at once presents a new spatial quality and offers a layer of ornamentation,” he said. “The word ‘abito’ meaning ‘dress’ in Italian has the same roots as the verb ‘to inhabit’.”

Also in the collection is a modern interpretation of the chandelier that is both a kinetic mobile sculpture and visually-arresting pendant. The Home Ceiling Lamp is a product of 3D printing technology, its sleek configuration comprising differently-sized lampshades counterbalancing each other in shape and light intensity. Each lampshade can be adjusted, allowing its user to direct them towards a specific spot or scatter the light for general illumination. The all-white abstract design is contrasted with a playful red ball hanging at the bottom.

Japanese oil painting major Nasa Funahara turned her love for patterned and colourful masking tape into a fun series of “paintings”. The Musashino Art University student delved into her collection of over 450 rolls of tape to create intricate interpretations of famous paintings, including Vincent van Gogh’s Sunflowers, Johannes Vermeer’s Girl with a Pearl Earring, Edvard Munch’s The Scream and Leonardo da Vinci’s The Last Supper.

Painstakingly tearing bits and strips of tape by hand, Funahara recreated large-scale versions of these paintings, with each taking an average of a week to complete. The intentional combination of patterns and colours was dictated by the need to match the intricate strokes of these classic works, yet her unusual choice of materials infuses vibrancy and personality to iconic — and largely sober — masterpieces. The vivacity and intricacy of her works have caught the attention of the design world and a digital audience. 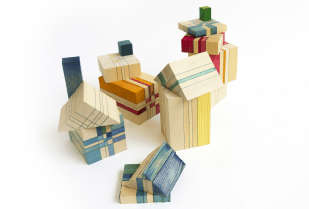 After failing to permanently stain the floors at British fashion designer Stella McCartney’s stores, Raw Edges, a design studio run by Yael Mar and Shay Alkalay began experimenting with different types of wood and dying techniques to achieve permanence. The oak parquet at the stores had been stained repeatedly but high footfall saw the effect fade after a year or so.

The design duo investigated the way trees draw up water and minerals through its roots and grains, and harnessed the process as a means to pigment the wood from within. Jelutong timber was found to take to the dyes most effectively. Complex patterned blocks were soaked in vibrant dyes and then shaped in a computer numerically controlled (CNC) machine. Pieces were then glued together with the grains facing vertically, akin to the composition of a butcher’s block. The graphic patterns were inspired by chequered textiles and the wood was crafted into furniture pieces such as a desk, mounted wall shelf, low tables and stools for a solo exhibition at the annual Brussels Design September show. 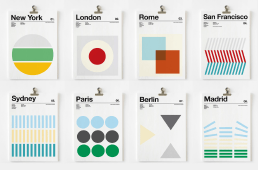 English graphic designer Nick Barclay, known for breaking down subjects to their most basic forms in his clean, crisp posters, has done it again. The Sydney-based designer very recently unveiled Three Colour Cities, a series of eight posters that use colours and shapes synonymous with the cities they represent. New York, Paris, London, San Francisco, Rome, Berlin, Madrid and Sydney are showcased in block colours and geometric shapes. The London poster depicts the red of buses and phone boxes while New York is portrayed in yellow, green and grey, after its iconic taxis, the Statue of Liberty and its copious skyscrapers respectively. Madrid’s poster, on the other hand, is supposed to echo the city’s distinctive architecture.

Among Barclay’s earlier poster series include the successful Classic Cocktails, a collection of ten posters illustrating timeless cocktails in their appropriate colours and serving glass. The series was inspired by his introduction to the Negroni (gin, vermouth, Campari and a twist of orange) when he first discovered Sydney’s thriving cocktail scene.

The Three Colour Cities series is available for purchase on his website, with each poster priced at AU$30 (RM90).

V is for vision

There is something inherently elegant about a simple solution, as Japanese studio Nendo proved when it unveiled the stay-brella. Everyone who has ever owned an umbrella is all too familiar with the hassle of trying to lean it against a wall or item of furniture, only to have it slide down onto the floor before long.

The designers at Nendo came up with a sturdy V-shaped handle to replace the original curved one – the latter fitted for easy grip – and that simple tweak made a world of difference. The handle allows the stay-brella to hang from a table edge, stay propped up against the wall, and even stand straight up when placed handle-side down on the floor. Eight shades animate the ingenious umbrella, each with a surface coating that reduces UV rays by up to 90%.

That an easy, brilliant solution took this long to come into existence is almost unbelievable in hindsight, but such is the nature of the best answers. 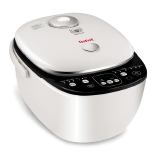 Cooking rice, among the earliest kitchen lessons in an Asian household, just got easier with the DeliRice RK8061 by Tefal. The first induction rice cooker to be launched in Malaysia, the multifunction machine flexes time-saving and energy-efficient advanced heating technology.

An electric current from the external vessel creates a magnetic field surrounding the pot, thereby generating a proficient heating convection with an even temperature throughout cooking. Ten extra functions include congee, porridge, soup, quick cooking, steam, reheat, small quantity cooking and adjustable timer, while allowing for instantaneous and precise adjustments during cooking.

Complementing the durable non-stick stainless steel pot and inner bowl are the LED control panel and micro-pressure valve, as well as a keep warm function that goes up to 12 hours and a pre-sent function that can be set up to 24 hours in advance. Accessories include a steam basket, measuring cup and rice and soup spoons. The clean modern design fits well with any contemporary kitchen, and retails at RM479. It is available at main department stores and electrical specialists outlets.