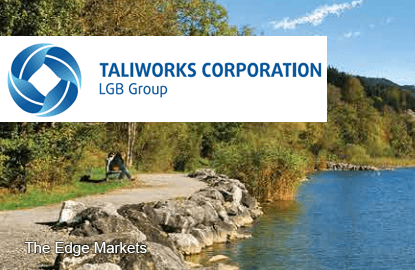 KUALA LUMPUR (July 22): Infrastructure company Taliworks Corp Bhd has proposed to undertake a share split and a free warrants issue, to enhance the marketability and liquidity of its shares.

The proposed share split involves the subdivision of every two existing Taliworks shares of 50 sen each into five shares of 20 sen each.

The proposed free warrants issue, meanwhile, will involve the issuance of up to 241.93 million warrants on the basis of one warrant for every five existing Taliworks shares held. It will be implemented after the completion of the proposed share split.

"The warrants are exercisable at any time within three years commencing on and including the date of issuance of warrants," said Taliworks in a statement today.

Both proposals are subject to approval from Bursa Securities and the company's shareholders, but are expected to be completed by the fourth quarter of 2015.

“The proposed share split is expected to enhance the marketability and trading liquidity of Taliworks’ shares on the Main Market of Bursa Malaysia. It will also encourage ownership of Taliworks shares by a broader group of shareholders by increasing the number of the group’s shares in the market as well as improving retail participation,” Taliworks executive director Lim Yew Boon said in the statement.

According to Taliworks, the exercise price of the warrants will be fixed at a premium of at least 15% over the theoretical ex price of Taliworks’ shares before the entitlement date and shall in no event be lower than the par value of the shares.

“The board of directors believes that the proposed free warrants issue is an appropriate avenue to reward existing shareholders of Taliworks for their continuing support and enable them to participate in an equity derivative of the Group without incurring any cost," said Lim.

The enlarged number of shares after the corporate exercises, assuming the full exercise of the outstanding employee share option scheme and the completion of its ongoing private placement exercise, is estimated to be at 1.45 billion shares of 20 sen each.