Taking over the reins at Petronas during a trying time 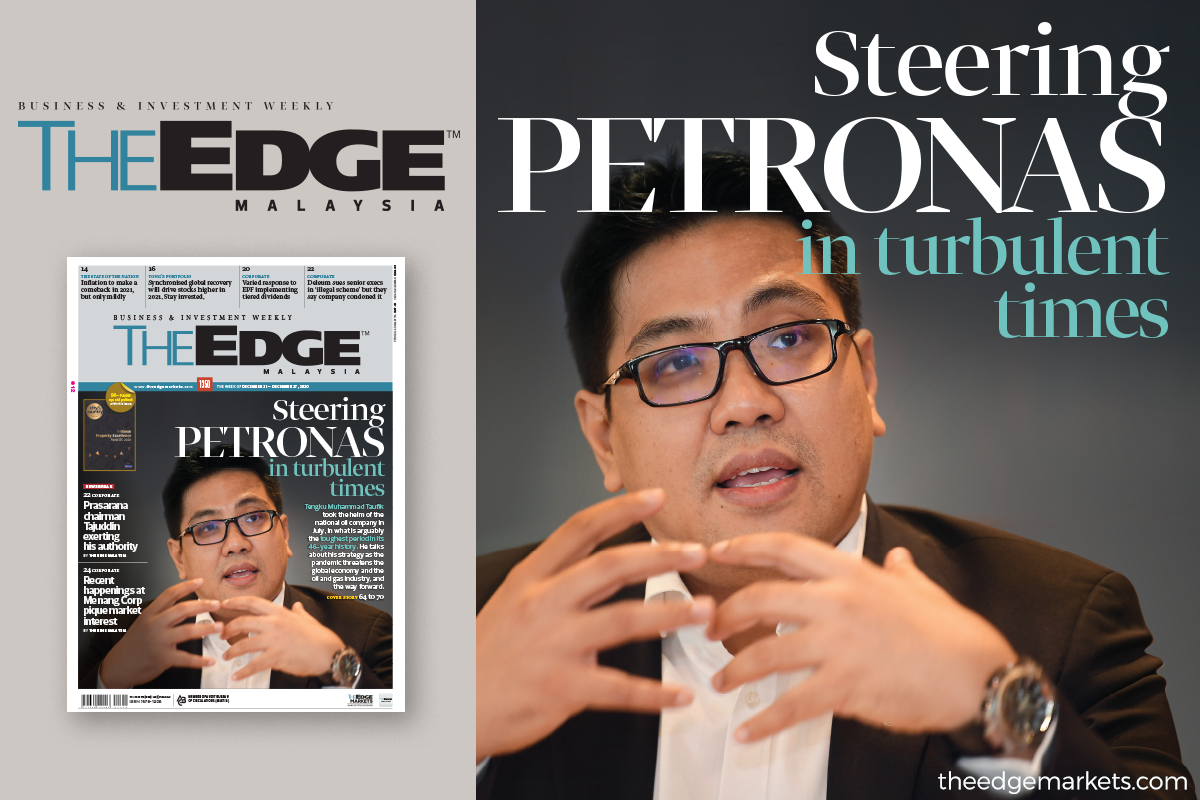 KUALA LUMPUR (Dec 19): On the 83rd floor of the Petronas Twin Towers last week, Tengku Muhammad Taufik Tengku Aziz, the president and CEO of Petroliam Nasional Bhd (Petronas), met up with The Edge for a two-and-a-half-hour session, the longest thus far any CEO of the oil company has had with us.

And the hours seemed to pass quickly with humorous exchanges and banter, but all questions were answered and peppered with facts on the oil company and its direction. It was a frank and good interview.

Then again, the times, they are changing — and for the first time since it was set up in 1974 to become the custodian of the country's hydrocarbon resources and to regulate the industry from then concessionaires like Shell and ExxonMobil — Petronas is likely to end the year with an annual loss. It is a situation brought about by the total collapse of the oil and gas market and economic standstill owing to Covid-19 and impairments from the acquisition of assets a few years ago, when things were rosier, and oil prices not so volatile.

And while all these challenges are looming and taking its toll on operations, there is the shareholder — the Federal Government — which looks to the oil company for dividends and other forms of support to help in its running of the country’s economy during the pandemic. This requires the top brass in Petronas to perform the delicate balance of meeting both the needs of the company and that of the government of the day.

“We are very mindful that the Company’s Act requirement... solvency before declaring any dividend, is fulfilled, or else the board will be breaking the Company’s Act clause,” said Tengku Muhammad Taufik in the interview.

Quite recently, the oil and gas industry was abuzz with talk of several individuals at the national oil corporation being investigated by the authorities for corruption, another issue Tengku Muhammad Taufik has to grapple with, as there is no longer this perception that the national oil company has high standards of integrity.

"I know that there has been a growing perception that Petronas has become more susceptible to this kind of practice (corruption), particularly as it grows in size (as an organisation). I will tell you what my stance on this is — there is zero tolerance for corruption; if you are discovered, there will be no exception," said Tengku Muhammad Taufik.

At 46, Tengku Muhammad Taufik may seem young, but his demeanour, how he handles himself, his stature, confidence and capability — how he explained the numbers at Petronas — were impressive. And with age on his side, he could be at the helm of the national oil company for the foreseeable future and set the direction for Petronas' next phase of development including diversifying into renewable energy and speciality plastics.

A Petronas scholar, Tengku Muhammad Taufik served in the early 2000s as executive assistant to former chairman, the late Tun Azizan Zainul Abidin — the man who, among others, crafted Petronas’ mission statement to be an organisation of high integrity and professional values. The late Azizan was also the one who kick-started Petronas' global expansion.

Five months into the job as president and CEO, Tengku Muhammad Taufik shares his experience, views on the industry and the difficulties encountered in the Covid-19 economy and market. Pick up a copy of the latest issue of The Edge Weekly to find out more.