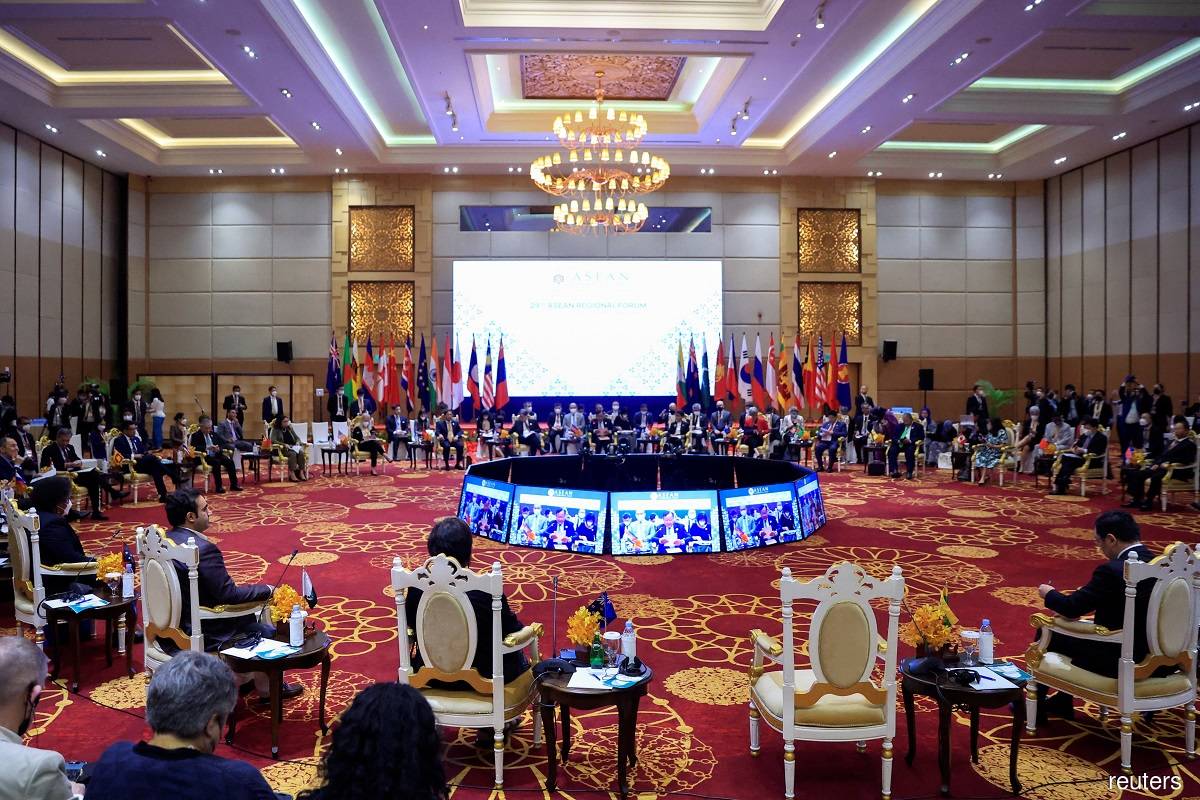 A general view of the ASEAN Regional Forum during the ASEAN Foreign Ministers Meeting held in Phnom Penh, Cambodia on Aug 5, 2022.

PHONM PENH (Aug 5): Tensions over developments around Taiwan spilled into an Asian meeting of foreign ministers on Friday, diverting attention at a gathering that had been expected to focus on efforts to end the crisis in Myanmar, among other issues.

Southeast Asia's ASEAN Regional Forum included officials from the United States, China, Russia and Japan, but it ended with no new agreements announced and closing statements deferred until Saturday, as Beijing and Washington traded barbs over a visit this week by US House Speaker Nancy Pelosi to Taiwan that has enraged Beijing.

Foreign ministers of more than 20 countries joined closed-door roundtable talks in Cambodia, as China carried out large-scale military drills, including the launching of live missiles around Taiwan, in response to Pelosi's trip.

She was the highest-level US visitor in 25 years to the self-governed island, which China regards as its sovereign territory.

"There is no justification for this extreme, disproportionate and escalatory military response," US Secretary of State Antony Blinken told a news conference on the sidelines of the Phnom Penh gathering.

"Now, they've taken dangerous acts to a new level," he said, emphasising Washington would not provoke a crisis and would support regional allies.

The Association of Southeast Asian Nations (ASEAN), hosting the meeting, called on Thursday for restraint and warned of the risk of miscalculations and confrontation among major powers.

China on Thursday cancelled talks with Japan over remarks made in a G7 statement on Taiwan and that same day, Chinese foreign minister Wang Yi walked out moments before a gala dinner attended by his US and Japanese counterparts, without giving a reason.

Wang called a rare news conference late on Friday, where he accused Blinken of spreading misinformation.

He called Pelosi's trip a "contemptible farce" and stressed China's military response to it was "firm, forceful and appropriate", and handled professionally.

Asked about his walkout, Wang suggested Hayashi may have had a guilty conscience.

"If you have not done anything wrong to China, why are you worried about this?"

Hayashi said he noticed Wang and Lavrov leaving as he spoke.

"In times like this, when the situation is tense, communicating well is important. Japan is always open to dialogue with China," Hayashi told reporters.

The 10-member ASEAN issued a communique on Friday that made no mention of Taiwan, but stressed its disappointment at the limited progress made by Myanmar's military rulers in implementing an ASEAN-led peace agreement.

The communique said it recommended that an ASEAN summit in November assess progress by the junta in implementing the peace plan "to guide the decision on the next steps". It did not elaborate.

Myanmar is an ASEAN member but the generals — who took power there in February last year and have been widely criticized abroad for crushing dissent — are barred from attending its meetings until progress in the ASEAN peace plan is demonstrated.

Some members of ASEAN, which has a tradition of non-interference in each other's internal affairs, have been strident in criticising Myanmar, with Malaysia saying it was frustrating everyone and making a mockery of ASEAN, and Singapore questioning the value of engaging with the generals.

Myanmar's state television late on Friday carried a statement rejecting those rebukes and denouncing ASEAN's decision not to invite the junta to its meetings, arguing it was cooperating with a special ASEAN peace envoy.