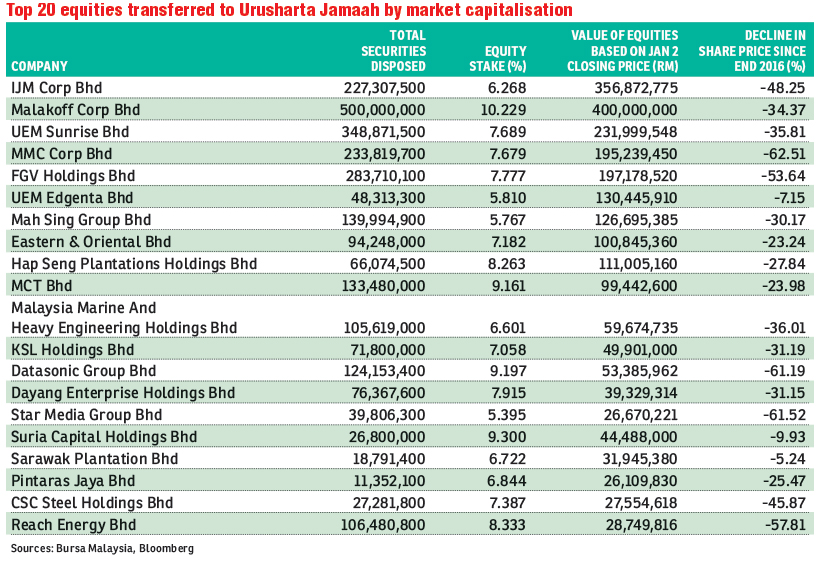 KUALA LUMPUR: Since it commenced asset transfer last week, Urusharta Jamaah Sdn Bhd has taken over an estimated RM2.6 billion worth of shares in 43 companies from Lembaga Tabung Haji as at yesterday.

Urusharta is a special purpose vehicle (SPV) set up by the ministry of finance to take over RM19.9 billion worth of Tabung Haji’s underperforming properties and equities.

The total sum of RM2.6 billion is based on the respective companies’ yesterday closing prices. The shares transferred were worth RM4.76 billion as at end-2016.

Based on a two-year time horizon, most of these counters that have been transferred over to the SPV have seen double-digit declines in their share prices.

Not all investments are bad.

Share prices in some companies in which Tabung Haji has invested have appreciated over the past two years, for instance TRC Synergy Bhd, which has climbed 54.7% since December 2016, and Lion Industries Corp Bhd, which has risen 18.5%.

Tabung Haji group managing director and chief executive officer Datuk Seri Zukri Samat has earlier said that the pilgrims fund is reviewing its holdings in oil and gas assets and will decide on whether to entirely dispose of or reduce its stakes in these companies.

Last month, Tabung Haji revealed that the SPV would be acquiring the pilgrims fund’s underperforming properties and equities in exchange for RM10 billion in sukuk and RM9.9 billion in Islamic redeemable convertible preference shares as part of its restructuring plan.

Zukri reportedly said properties with yields of less than 2% and equities that had seen impairment of more than 20% would be acquired by the SPV at book value.

Of the assets to be transferred to the SPV, 80% of the total value comprises equities with properties accounting for the balance 20%.