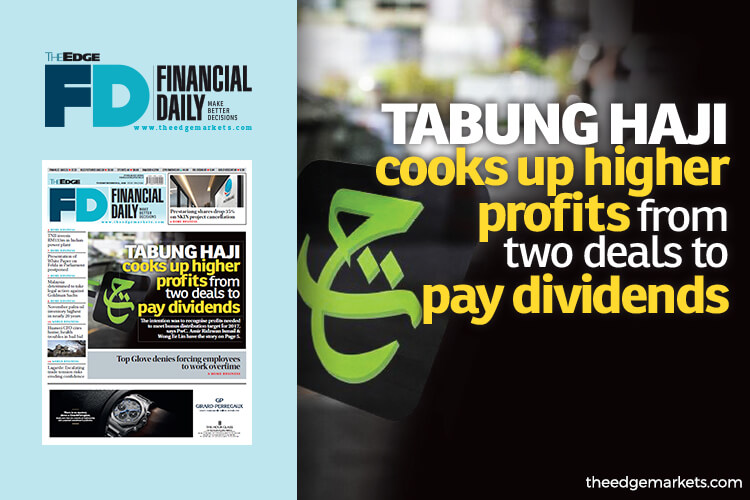 KUALA LUMPUR: Lembaga Tabung Haji did two suspicious transactions that helped cook up its 2017 profits to enable it to pay dividends that it would otherwise not be allowed to do.

Because the profits were not real, the pilgrims fund dipped into depositors’ savings to pay the dividends.

These were some of the key findings of an audit done by PricewaterhouseCoopers (PwC) that was tabled in Parliament yesterday.

The independent report entitled “Financial Position Review of TH” by PwC showed that the troubled pilgrims fund made a gain of RM553 million from one of the deals, namely the disposal of Bank Islam Malaysia Bhd (BIMB) shares in 2017.

The shares were subsequently bought back by Tabung Haji.

“The trader confirmed that the shares were sold to four brokers and subsequently bought back within four days after trade date at the same price sold through off-market trading,” said PwC. It identified the four brokers as UOB, Kenanga, TA Securities and Affin.

“Effectively, the sale of the shares in BIMB did not result in [any] cash benefit to Tabung Haji, other than gain at Tabung Haji level, which increased the profits of Tabung Haji for the financial year ended Dec 31, 2017 (FY17) by RM553 million. A similar gain of RM605 million had been made in 2016 with total sales proceeds of RM2.07 billion,” it noted.

“The intention was to realise the upside value of BIMB shares and recognise profits needed to meet bonus distribution target for 2017,” it noted.

These transactions should be investigated for potential breaches of listing and Bursa Malaysia rules, said the audit firm.

“We note that these gains of RM553 million are not funded by cash as the sale proceeds were all used to buy back the shares,” it added.

PwC cited the dividend income received by Tabung Haji from its subsidiaries totalling RM510 million in 2017 as the second deal. However, out of the total; PwC said only RM125 million had been paid by the subsidiaries.

“Although these [two] transactions appear commercial, we understand that the intention was to enable Tabung Haji to report higher profits for the purpose of distribution to the depositors,” said PwC in the report.

“This would only lead to the dividend payouts or hibah being funded out of the cash from the depositors’ savings funds and not the profit declared,” it added.

On a separate matter, PwC also revealed that a discussion with Tabung Haji chief financial officer (CFO) confirmed that the changes in the impairment threshold had been made to enable the pilgrim fund to have sufficient profits for distribution of bonus to the depositors for 2017.

PwC shared that Tabung Haji had changed its impairment threshold twice in 2017 from 70% to 85% and again to 90%, without any consideration for prolonged decline in value of the investments.

“The increase of the threshold has allowed the deferment of recognition of impairment loss in FY17,” said PwC.

“Had Tabung Haji maintained the 70% threshold policy, an impairment loss of RM1.31 billion would need to be recorded in the income statements, while the impact of changing the impairment threshold to 85% and 90% would be RM171 million and RM1 million respectively,” said PwC.

Notably, PwC stated that the CFO said the change in impairment threshold had been approved by the board and had been made known to the 2017 Auditor-General’s Report.