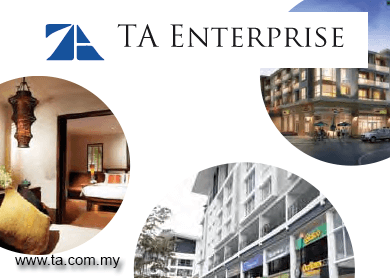 This translates into earnings per share of 6.12 sen versus 3.37 sen last year, the group’s filing with Bursa Malaysia today showed.

TA Enterprise’s investment holding division’s profit before tax went up by more than two-fold to RM58.3 million in 1QFY16, compared with RM24.4 million in the previous year, despite higher finance cost and lower foreign exchange gain.

On the other hand, its broking and financial services division’s profit before tax fell 16% to RM9 million, mainly due to a drop in brokerage income.

Its hotel division registered a lower net operating profit of RM24.8 million, as compared to RM26.8 million last year, mainly due to lower occupancy rate of the Movenpick Resort, Phuket and Swissotel Merchant Court, Singapore, which are currently under major renovation, it said.

Moving forward, TAE said although recovery in the United States' economy is gaining momentum, the global economy is expected to remain subdued, in view of lower oil prices and China’s growth slowdown.

“Domestic’s economy is expected to be more challenging due to slower export growth and anticipated moderate private consumption, following the implementation of Goods and Services Tax (GST) on April 1, 2015,” it said.

However, the Group said it will continue to be profitable in the financial year ending Jan 31, 2016, barring any unforeseen circumstances.