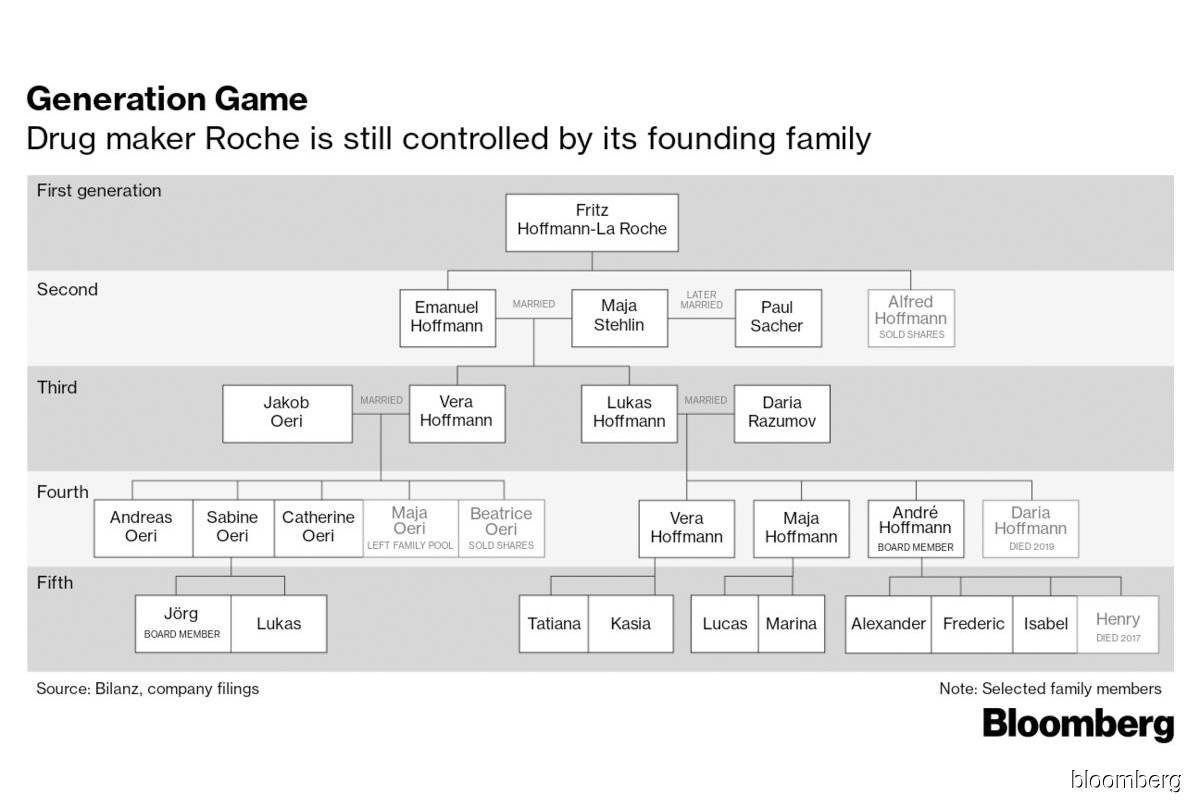 (Aug 6): The timing was precise, the choreography immaculate: with two deft maneuvers, a new generation of the Oeri-Hoffmann family marked its growing influence over the wealthiest dynasty in Switzerland.

First, seven members of the fifth generation late last year joined the clan’s shareholder pool, which oversees a US$25 billion stake in pharmaceuticals giant Roche Holding AG. Then, in March, another member of that generation, Joerg Duschmale, replaced his uncle on the drugmaker’s board.

The changing of the guard was meticulous planned. Duschmale’s ascent to a directorship had been telegraphed for almost two years and, in a rare public interview, he underscored the family’s commitment to Roche, the bedrock of its fortune since 1896.

“It is important to continue the successful family history and to pass it on to the next generation,” he told Switzerland’s Bilanz magazine. “We are showing that the family continues to stand behind the company.”

Their US$39 billion fortune is up almost a quarter over the past 12 months, according to Bloomberg’s annual ranking of family wealth. Sales of Roche’s Covid-19 tests have helped boost its stock in 2020.

What’s striking is not just the size of their wealth, but its longevity. The Oeri-Hoffmanns have now reached the fifth generation, and gotten there richer than ever.

That’s no mean feat. Fewer than one in five family-controlled companies remain in family hands by the third generation, according to Balz Hoesly, a partner at Zurich-based MME who specializes in estate planning.

“It only requires a few unsatisfied members to cause real trouble,” he said.

For the uber-wealthy, managing generational change is a perennial concern. Here are some reasons why the Oeri-Hoffmanns have been able to navigate this fraught issue.

Overseeing Roche has become part of the family’s DNA.

Bearer shares held by family members give them voting control over the drug maker despite only owning about 9% of the firm. The family consistently emphasize their role as stewards of the company.

That common mission still exerts a pull even for those family members outside the pool. Maja Oeri, great-granddaughter of company founder Fritz Hoffmann-La Roche, transferred her shares out of the family voting bloc in 2011. But she hasn’t sold any of her 8 million shares since, according to filings.
Liquidity

The stability of the Hoffmann and Oeri shareholding is aided by the hefty dividends they receive, which totaled more than US$700 million in 2020. It’s an annual windfall that helps forestall share sales, which would otherwise dilute the family’s holding.

They’re also helped by the relatively small number of family members that divide up the dividend. Their shareholder pool comprises 15 individuals, compared with the dozens, sometimes hundreds, of heirs at other clans.
Frugality

Most family members seem to have little time for extravagances. Lavish parties and superyachts are conspicuously absent.

Duschmale cycles to work and his biggest luxury is hiking shoes, according to the Bilanz profile. Uncle Andreas Oeri is an orthopedist who maintained his practice over the course of quarter of a century on Roche’s board. Aunt Beatrice Oeri — who sold her stake back to the shareholder pool in 2009 — manages a jazz club in Basel.
Taxes

Avoiding a hefty tax bill when assets are transferred between generations also helps.

Switzerland has no federal inheritance tax. The canton of Basel, where Roche and many of the family reside, doesn’t tax share holdings passed down within one’s immediate family.
Discretion

Keeping a low-profile has served the Swiss dynasty well, allowing them to avoid the public fallouts that have split other clans.

So far, the fifth generation exhibit a similar disposition. Duschmale — along with the rest of the shareholder pool — declined to comment.