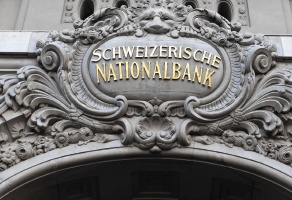 SWITZERLAND’S abrupt decision to stop holding down the value of the franc may look like capitulation in the face of the much larger European Central Bank’s (ECB) moves to weaken the euro.

That said, there’s another plausible explanation: The Swiss central bank is simply switching fronts in a global currency war.

The Swiss franc’s role as a traditional haven got a boost from the 2011 European debt crisis: Suddenly, everybody wanted francs, not euros. To keep Swiss exporters competitive in Europe, the Swiss National Bank (SNB) stepped in, buying about €250 billion worth of foreign currency over three years to prevent the value of the franc from rising above about 83 euro cents.

As the ECB became more and more amenable to lowering rates and driving down the euro’s value, however, the peg made less and less sense. It’s not just that the Swiss foreign reserves were losing their dollar value — that wasn’t a tragedy on its own.

Swiss exporters were also becoming less interested in selling to Europe as the region’s economy remained stagnant despite the relaxation of monetary policy.

In November 2014, the last month for which data are available from Swiss customs, exports to the United States — Switzerland’s second biggest partner after the EU, which was responsible for 21% of Swiss exports in 2013 — increased by 10%.

That was the fourth such double-digit monthly increase in a row. Exports to the EU, on the contrary, fell 2%. There was also strong growth in imports from the US and a similarly steep drop in European imports.

The Swiss economy is extremely flexible, quickly able to reorient trade flows as demand patterns and currency rates change. While Switzerland cannot completely give up on Europe — it is, after all, surrounded by the EU — the failure of European attempts to revive the economy and the expectation that the euro will weaken further, making it too expensive to keep exports competitive there, has forced the Swiss monetary authorities to look toward other markets.

These include Latin America and Asia, where the dollar traditionally matters much more than the euro and many contracts are made in dollars.

In that context, last Thursday’s remarks by Kit Juckes, global strategist at French bank Societe Generale, made a lot of sense. Juckes wrote: The SNB is not “giving up” but rather, changing tack.

After allowing the markets to clear, further intervention is likely — but possibly, in USD/CHF (Swiss franc) rather than EUR/CHF, with added emphasis on the CHF trade weighted index. After all, the marginal buyer of Swiss luxury goods nowadays is more likely to be in Beijing or Shanghai than Frankfurt or Paris.

In a column in Germany’s Handelsblatt business daily on Saturday, Wolfram Weimer suggests Switzerland should have adopted the euro — then it wouldn’t have been forced to buy up euros for three years to maintain its export competitiveness.

It could have simply run a huge trade surplus with the other countries of the euro area, “just like Germany”.

The problem with that argument is that Germany is now struggling as the euro area as a whole stagnates. Switzerland, on the other hand, has retained its ability to manoeuvre, and that’s what it is doing — regardless of what losers from the surprise move may say about dents in its credibility.

As the dollar rises in recognition of the end of US quantitative easing, and in expectation of interest rate hikes sometime this year, selling to the US and other dollar-based markets becomes easier and more attractive for exporters everywhere, not just in Switzerland.

India, Japan and the euro area all want a piece of America’s renewed growth. To frame this in terms of a currency war, the fighting is shifting to the US front. — Bloomberg

This article first appeared in The Edge Financial Daily, on January 19, 2015.