WHEN you hear the words “dirt bike” you might expect to read something splattered with the mud of swamped-in trails or scrub-covered cliffs — something that drills the insistent whine of motorcycle engines through your brain with every sentence.

This isn’t that piece, sorry. Come back another day for a story that gets your hands dirty.

This is sunnier, clearer. It’s about how a scrappy Suzuki was the most fun thing I’ve ridden in months. It wasn’t just the route, or the weather, or the company. It was the motorcycle.

Oh, and I take back the part about the cliffs. There were cliffs on this ride. But we didn’t mangle them — we just rested on our bikes for a moment and drank in the Pacific Ocean view.

At home on the street

I used the 2015 Suzuki DR-Z 400SM for a day from Long Beach, California, up through Retro Row to San Pedro, with detours through the Sunken City and Paseo Del Mar. I went with two friends — a DJ and a long-time LA rider friend — who rode a Honda and a Kawasaki, respectively. We had talked about playing musical chairs with the bikes along our route, for the sake of experience, but about an hour in I knew I didn’t want to give up that lanky Kawasaki. Call me greedy; it was just too fun.

The US$7,189 (RM24,946) DR-Z 400SM has a 398cc 4-stroke, liquid-cooled, single-cylinder engine. It is more nimble than its DR-Z400S brother, thanks to its inverted front forks, rear aluminium swing arm and rear shock absorber that are light and adjustable for high/low speed compression damping. Its wide wheel rims and sticky tyres make it better suited than the 400S for riding city streets as well.

In fact, in the papers I signed before I rode, Suzuki informed me that the 321-pound 400SM is meant for “serious off-road enthusiasts”. It has every right to wind itself through empty riverbeds and cross mossy forest trails. But, in addition to bettering the 400S on the streets, it’s more solidly built than Suzuki’s US$4,199 DR200SE (199cc engine, 31-inch seat height, 278 pounds) and more universally athletic than the other sibling in the DR line-up, the US$6,499 DR650SE (644cc engine, 34-inch seat, 366 pounds). It’s great, actually, for riders who want something to commute with during the week and then take off-road Saturday morning. (Switch out the tyres on this puppy when you’re ready to hit the trail, and you’ve got it made.)

I should note: The SM at the end of the name stands for Supermoto, a term used to describe motorcycle racing on a circuit that combines flat-track, motocross and road racing. Some bikes used in those races are so aggressive that they’re not street legal; this one, thankfully, certainly is.

The main thing to know for our purposes here is just how lean-and-mean this DR-Z feels when you ride it. Its whole raison d’etre centres on a certain lightness of being; I loved that I could whip more aggressively through traffic on this slim thing with its high vantage point than I can with a heavier, low-slung sport bike.

The engine/suspension/throttle are designed to be tight and narrow; the magnesium valve cover, easy-access clutch, magneto cover and chrome-steel frame all helped shave off extra pounds. They require virtually no maintenance, unlike, say, those handsome-but-headache-inducing vintage racers I see every time I’m in Venice (California).

Even the instrument cluster on the front of the 400SM is compact, with the digital speedometer, odometer, twin trip meters, clock, timer and stopwatch functions all easily visible at one glance — which I prefer because on this thing all I wanted to do is sniff the air and take in the view, not mvonitor dials all day.

I might be biased toward dirt bikes. I’m 5’10½”. I am also not extraordinarily huge in my, uh, bicep area. This means I generally have the most fun on tall, light bikes. No 800-pound HOGS for me.

To that point, the DR-Z400SM also has a seat height of 35 inches — an inch higher than the more powerful 650SE and a whopping four inches taller than the 200SE — so if you ride this, be ready to stretch your legs. The suspension gives in a bit when you sit down, which allows for some easing of that height, but I wouldn’t recommend this bike for anyone with an inseam of less than 32 inches. Even 31 might be stretching it.

Its 2.6-gallon tank, though smaller than that of the 200SE’s large 3.4-gallon cask, will still last you days before needing a topper. This is among the most reliable and fairly priced of its kind, along with competitors like the US$5,099 Kawasaki KLX 250S and beginner-friendly US$4,999 Honda CRF250L.

I also live in New York City, which in general must have the worst roads in the country. Imagine pot holes, ditches, gullies, gulfs galore. So I am predisposed to appreciate things with shocks, and the DR-Z soaked up the pot holes I crossed like a sponge. On the other hand, the Ducati Monster I drove earlier this year did not. Oh, the Monster proved sexy and thrilling — but it’s made to excel on smooth highways, not jagged side streets. The DR-Z is a bit more of a Swiss Army knife in its ability to cope with varied situations. And in the long run that can be a great thing.

Not to mention that women on dirt bikes get lots of attention around town, and if you’re a woman and you like that, you’ll get plenty on the DR-Z.

So yes I do enjoy a dirt bike.

Riding in the wind

That said, when we headed toward the Vincent Thomas Bridge along the Seaside Freeway on our way out to the ocean, I was curious to see how the DR-Z would perform. The bridge is quite long and buffeted constantly by tractor-trailer trucks moving goods from the nearby Port of Los Angeles to San Pedro and beyond. It’s all situated by the water, obviously, making the bridge itself especially windy on an autumnal afternoon.

The speed limit on the bridge is 55mph. I kept it to maybe five miles per hour over that, and the bike felt fine, stable, and in control. The throttle was smooth each time I changed gears on the 5-speed transmission (cable-operated clutch). It’s sensitive enough, but not touchy.

The brakes (dual-piston caliper on the front, single on the rear) were reassuringly quick and crisp, with a lot of forward give as I stopped. The vantage point from being on the high bike was an interesting change from the crouched position you typically take at speed: Riding the DR-Z felt like sitting on a thoroughbred — not as thick as a Dutch Warmblood, say, or as muscled as a Quarter horse, but plenty tall and willing to go.

Clearly, though, this bike is meant for backroad speeds. It’s not what you’d call aerodynamic: As I led my two companions across the arch of the bridge, that wind hit my torso full force, leaving me nowhere to crouch. At speeds above 70mph or so the DR-Z gets exponentially less fun to ride.

The DR-Z looks snarly, with a high nearly flat line from the handlebars to the rear of the seat. The aluminium rims and radial tyres are set far away underneath the arched front fender and the alert tail. A single bright halogen headlamp at the front keeps the look minimal and rowdy.

The rear view mirrors are situated well for riding upright, with a straight back, eyes alert in front of you; the handlebars are wrapped in rubber such that I didn’t feel vibration-fatigue after the day’s ride. The flat seat is not padded like a cruiser, but, again, after a day of riding my thighs and hips and butt were no worse for the wear. Not that I’d want to ride this on a multi-day rally.

A small zippered pouch on the back is surprisingly useful for holding cell phones, wallets, keys and mail, though it doesn’t look good back there because it interrupts the profile of the bike. (It’s still a better option than having to add a backpack or saddlebags.)

I wish the DR-Z400SM were available from Suzuki in more than white and without all of the neon badging it came with when I rode. An all-black or matte white version would be sick.

The bottom line: More riders should consider the DR-Z400SM. Yes, this is kind of a run-and-gun motorcycle. I get that dirt bikes are suited for mud — I like it that way. And it performs wonderfully in its natural habitat. But sometimes it’s nice to take the scenic route. And the Suzuki DR-Z400SM chills out just fine. — Bloomberg 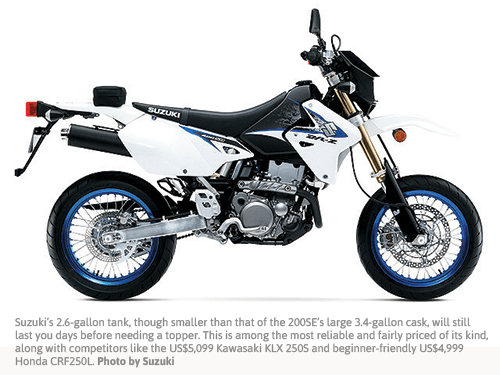