Suunto’s Kailash is designed for adventurers and explorers 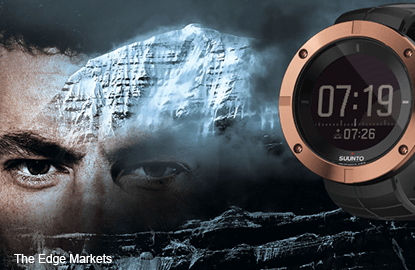 Named after the foreboding Mount Kailash—a sacred place in four religions, Bon, Buddhism, Hinduism and Jainism, which is part of the Transhimalaya in Tibet— Finnish watchmaker Suunto’s Kailash watch embraces the spirit of the mountain. After being deemed “utterly unclimbable” by mountaineer Hugh Ruttledge in 1926, the mountain is today off limits to local and international mountaineers alike, as it holds a certain religious significance. It stands at over 6,600m and sees thousands of pilgrims visiting the area, circumambulating the mountain each year.

The Kailash is the first watch released in the Suunto World Collection, and is designed for purity and modernity. It is presented under the label of “Suunto 7R”— 7R stands for the adventure gene that scientists have identified in people with an adventurous mindset. With a bezel made of space-grade titanium, the lightweight watch has sapphire crystal glass, an outdoor-proof composite casing and a soft and durable silicone strap. Detailing includes a special 7R button made out of sapphire crystal.

This watch combines features that frequent travellers will appreciate — global, automatic time and location updates via GPS and a unique new adventure logbook that reveals a summary of its wearer’s adventures such as how many countries one has visited and how far one has travelled. All this can be accessed simply by pressing the 7R sapphire button. When visiting a new city, the watch even displays the direction and distance to the wearer’s starting point.

With the Adventure Timeline display, the watch shows not only the current time, but also customisable information such as altitude, sunrise/sunset times or daily step counts. When paired with the mobile Suunto 7R app on the iPhone, call, text and push notifications can be received via the watch as well. As a bonus, the Suunto Kailash watches even come in a waterproof cylinder case made of black, anodised aluminium to keep the watch and other valuables protected during travels.

The face of the new Suunto World Collection is none other than Spanish adventurer Kilian Jornet, who was voted as the People’s Choice Adventurer of the Year by National Geographic in 2014. Jornet holds the fastest time record for the ascent and descent of Mount Matterhorn, Mont Blanc and Denali. He is also an avid long-distance runner, having won some of the world’s most prestigious ultramarathons including the Ultra-Trail du Mont-Blanc, the Grand Raid, the Western States Endurance Run and the Hardrock Hundred Mile Endurance Run.

“I am an adventurer at heart. I have success in my life because I always have this inner feeling that risk is an inherent part of success. I always explore new paths, new ways of thinking. The Suunto World Collection shares the same values and life principles to help me feel empowered, and remind me of who I am,” Jornet said at the launch of the Suunto Kailash at Mid Valley Megamall last week.

The Suunto Kailash retails at RM3,999 and can be purchased from Solar Time stores and all fine watch retailers nationwide. For more info about the Kailash, visit www.suunto.com.