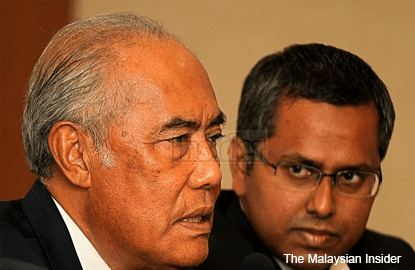 (Nov 27): The lack of evidence and unanimity among Supreme Council members were the reasons why Umno has not sacked six leaders who have been critical of the party's leadership, a source has revealed.

In the meantime, Umno disciplinary board chairman Tan Sri Megat Najmuddin Megat Khas confirmed that the board did not receive any reports against seven Umno leaders, as previously claimed by secretary-general Datuk Seri Tengku Adnan Tengku Mansor.

He also said, however, that the Umno Supreme Council had absolute powers to remove members from the rolls.

"According to the (party) constitution, the Supreme Council has absolute powers to take any action, including sacking any member.

Tengku Adnan had previously said that seven Umno leaders were in danger of being suspended after publicly disparaging the party. This presumably included Gopeng Wanita Umno chief Datuk Hamidah Osman who was sacked from the party on Monday.

A party source told The Malaysian Insider that disciplinary action against the seven Umno leaders was part of the agenda at Tuesday's Supreme Council meeting held in Parliament but the meeting failed to reach a consensus on the matter.

There were differences of opinion among council members on the proposal to take disciplinary action, with some opposing the move, the source said.

"Tengku Adnan failed to present the basis and strong evidence to take action against six of the seven members.

"There were Supreme Council members who objected to the move," the source said.

Among those who questioned the proposal to take disciplinary action was Tourism and Culture Minister Datuk Seri Nazri Aziz.

The source said they could only find evidence against Hamidah to justify disciplinary action, and she was sacked.

"They could only find evidence against her, but not the six others."

According to the source, the Supreme Council had not been keen to use the Disciplinary Board as they knew there would not be much evidence to justify taking action against the six.

In addition, several council members warned of worsening splits in the party if action was taken against the names, even as several Umno divisions have already began criticising president Datuk Seri Najib Razak.

"These council members said that Umno already had enough problems currently and did not have to create more," the source said.

The source added that they warned of more serious problems and possible open protests against Najib if action was taken against the six leaders.

It was previously speculated that Muhyiddin and Shafie would be sacked from the party before next month's Umno General Assembly for their continuous criticism against Najib over state-owned 1Malaysia Development Berhad (1MDB) and the RM2.6 billion “donation” deposited into his accounts.

In September Langkawi Umno member Anina Saadudin was sacked from the party after she took Najib to court to account for the RM2.6 billion donation. – The Malaysian Insider