SupermodelMe places KL on the centrestage! 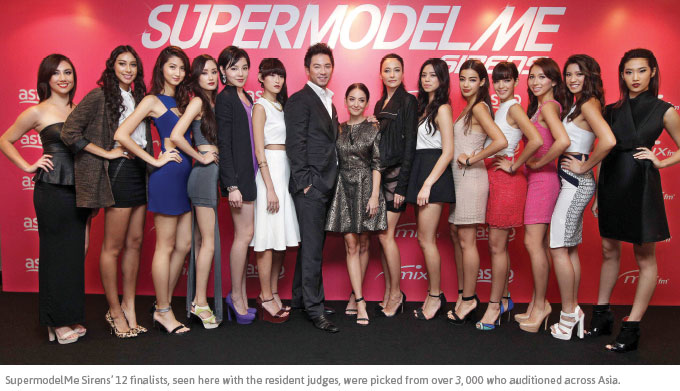 IT is the hunt for the ultimate siren — “A dangerously beautiful woman of substance and power”, or as resident judge and host Lisa Selesner puts it bluntly, these ladies “have got the cojones…”

Siren is the theme for this year’s hunt for the best of Asia’s exotic beauties and talents to eventually rule the runways and billboards on the fifth season of SupermodelMe, the multi-platform reality entertainment show.

SupermodelMe proudly claims that last year’s winner, Katherine Rigby, has since nabbed 12 TV advertisements and participated in 51 fashion shows on the runway, emphasising its mission to seek out top model talents of “Asian heritage” and spring boarding them to international careers.

Lau recounted recently bumping into Rigby in Hong Kong, where she literally had to brush him off and rush to her next shoot of the day. Wang added that it was really satisfying to see their former contestant on the billboards, “You go ‘wow!’ knowing that you’ve helped that girl achieve her dream.”

“We’re talking about millions of eyeballs that are seeing these girls. That alone is invaluable exposure,” said Selesner. The winner takes home a contract with a renowned agency, among other prizes.

Shot entirely in Kuala Lumpur this time around, the 10-episode season will see some unexpected sides of our capital. Creator and producer, Karen Seah, founder of Refinery Media, said she wanted to challenge different angles creatively to see if they can showcase Malaysia in a new light.

“You’ll see that no reality show has ever been filmed like this before [in the region], it elevates KL to look really international. We wanted to bring that out,” said Seah of the unscripted show.

Audiences can expect some surprises, including a rarely known sport of Ostrich racing.

Calling SupermodelMe a “model camp” of sorts, the three judges pointed out that the contest is an invaluable and intensive training for those who seriously want to be in the industry. “I wish I had someone telling me how it was done. I did eventually, but it took a long time to get to know people and learn,” said Wang, who is of Swedish and Chinese parentage.

She said the fact that Lau, Selesner and herself come from different segments of the modelling and entertainment industry makes the show more interesting.

“Lisa is a runway model, so she would mentor very differently from how I would,” said Wang, calling her the mother hen, while Lau would be the industry male perspective on the show. She explained that her focus is on bringing the business angle, confessing she’s aware of her rather mean, no-holds -barred reputation on the show. “I don’t want to waste their time. In this industry, time is not on their side,” Wang said.

Her film background and commercial success — and her Singaporean Chinese side — ensured that the veteran model brings a realistic perspective about marketing oneself.

“I’m a strong believer in making yourself a product and being able to sell yourself as a product,” highlighting SupermodelMe’s platform as the perfect kickstart, “I am very strict with [changing] the models’ mindsets, and getting them to realise that you are your product, your boss, your company.”

One of the biggest take-homes for the models on the show is to learn quickly what kind of model they are. “Not everyone can be a runway model. If I sat around, waiting to do a runway show, I’ll be waiting for the rest of my life, it’s just not realistic,” said Wang, referring to her petite build.

Selesner quipped, “This body cannot do bikinis. Nobody wants to see me in a bikini on the runway,” candid about her lanky body.

One thing both the judges have in common is their oft-repeated statements to the finalists, “suck it up” and “deal with it”. Both pointed out that while it’s okay to have healthy competitive drama on the show, their job is to give the girls a mirror and reality check of what the industry is like.

“People think we just stand in corners looking pretty, it’s not!,” emphasised Selesner, “standing in high heels for 16-hour days, posing and running in heels and bikinis when it’s sub-zero temperatures outside... it all takes endurance,” she added, “You’re talking about 35 hours of shooting, four hours of sleep and then getting up and doing it all over again.”

Then there’s the “drama”. On the show, which shoots for six weeks, 12 finalists are put into a house together during the filming period, and complete health and sports tasks on top of photoshoots that would determine their elimination. Despite the inevitable tensions and “cat fights” that arise, the judges are clear it’s nothing compared with what’s out there.

Lau also pointed out that it is healthy competition. “It’s essentially every woman for themselves out there,” hinting that there will be shock moments in this series as the fight gets intense.

“Oh yeah! Most of the stuff that happened on the show, I’ve had happen to me,” recalled Selesner, “So when the girls come to me and complain over some things, I look at them and say, ‘and?’”

The model, who is married to Hong Kong actor Daniel Wu, with whom she has a daughter, Raven, pointed out that the house experience is probably much worse in real model apartments. Discovered at the age of 14 in New York, she’s seen and experienced some of the worst and best of the industry, including a then top model stealing her outfit just before a fashion show started, leaving her with a bikini, of all things.

“But I think the worst was when I had my underwear stolen from me, it was disgusting!” she said and laughed off her experience in cramped model apartments.

In an industry notorious for its cut-throat reputation and backbiting, Wang said nevertheless it is an opportunity for the girls to help each other grow. Lau echoed the same, “Once the show is over, that’re 11 new friends there.”

SupermodelMe sets itself apart from the rest with its “by Asians, in Asia, for Asia” mantra. Where there was an option of the token Asian model years ago, and a trend that followed, Selesner insists that the field is now wide open:

“Now Asian models are right up there with every colour and creed, they are no longer considered just, ‘oh, that one Asian girl’.”

In fact, she pointed out the Asian “demureness” is sought after by clients, and feedback has it that the professionalism and tireless work ethic is bar none.

“[Models] say in the US or Europe are used to a certain catering service or lifestyle. Whereas in Asia, I mean we’re still sitting on plastic stools eating from Styrofoam boxes,” said Wang.

The judges said the show seeks to bring out that confidence and outspokenness, the risk-taking factor that generally Asian culture doesn’t bring out. Perhaps, it is a contradiction to keep Asian values, but Lau said it’s important as it will show in their work.

“It’s about personality and character as well,” explained Selesner, “clients don’t want to work with girls who are maybe as interesting as a wet puddle. They want to work with someone who is fun, intelligent and can carry a good conversation.”

Moreover,  strong confidence such as that of a siren need not be loud like the word’s other definition. Selesner, who is of French American and Jewish Chinese descent, had glowing reports about her peers from countries like China and Korea, calling them classy and quiet but  strong and know what they want.

“You can’t have all 40 people backstage like me. Can you imagine? I’m the loudest on set. You’ll always hear me,” said Selesner with an easy-going laugh.

SupermodelMe Sirens premieres on Nov 24 at 8pm, showing every Monday on Diva (Astro Channel 702). Behind-the-scenes footage and mobile videos shot by the contestants themselves will be available online. For more information, visit www.supermodelme.tv/