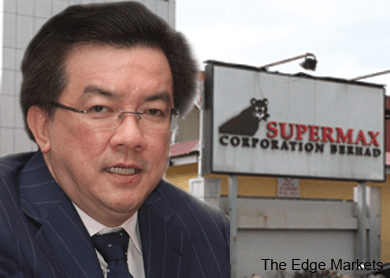 KUALA LUMPUR (Dec 15): Supermax Corp Bhd fell as much as 21 sen or 11% on news its executive chairman and group managing director Datuk Seri Stanley Thai has been charged for insider trading.

Rubber glove manufacturer Supermax fell to its lowest so far today at RM1.73 before reducing losses.

Thai declined to comment when contacted by theedgemarkets.com today.

"I was advised by my lawyers not to comment," Thai said over telephone.

According to news reports, Thai was charged with one count of insider trading at the Kuala Lumpur Sessions Court today.

It was reported that Securities Commission (SC) officers had accompanied Thai to the court at 9am today. Thai was alleged to have committed the offence between 2007 and 2010.

Abdul Rashid instructed Thai to surrender his passport to court in February next year when he returns from an overseas trip.

The SC charged licensed dealer Tiong Kiong Choon, 54, for insider trading of APLI shares in 2007 prior to the company's delisting the following year.

According to APLI's statement on Bursa Malaysia's website, the exchange regulator had delisted APLI on February 18, 2009.

APLI said Bursa Malaysia had delisted the firm as APLI had aborted its corporate revamp to rejuvenate its financials.