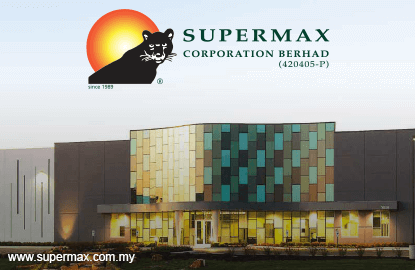 In a filing with Bursa Malaysia today, Supermax said in 1QFY17, it recorded earnings before interest, tax, depreciation and amortisation and pre-tax profit margins of 13.9% and 9.8% respectively.

There is no comparison as the group changed its financial year-end from Dec 31 to June 30. However, looking at its performance for the three months ended Sept 30, 2015, Supermax posted a net profit of RM38.46 million or 5.65 sen a share on revenue of RM309.87 million.

"Profitability was impacted by external factors such as increased minimum wages and further rationalisation of natural gas subsidy. The group has also incurred additional costs for its contact lens division, particularly in terms of advertising and promotion expenses," said Supermax.

On prospects, Supermax said the global demand for both natural rubber and nitrile gloves remains strong with healthcare awareness continuing to rise, increasing regulation of the healthcare sector and ever higher healthcare spending in both the public and private sectors.

It said rubber latex prices are expected to trend higher correspondingly to the expected strengthening of the US dollar for the immediate to medium term. As at Nov 25, 2016, prices had risen to RM5.78 per kg/wet.

Supermax shares closed up two sen or 0.9% to RM2.23 today, for a market capitalisation of RM1.5 billion.