This column features reports brought to you by Asia Analytica Sdn Bhd, an investment adviser licensed by the Securities Commission of Malaysia. All financial data are provided by AbsolutelyStocks.

Sunreit is particularly well liked by risk averse investors for its relatively resilient earnings and higher than market average yields. This is also why we are concerned. We believe the proposed perpetual notes will significantly increase the risks for unitholders, even if not immediately obvious, and quite possibly detrimental.

At first blush, a strategy of growing assets is positive for unitholders. Indeed, Sunreit units have done well since listing in 2010, trending steadily higher underpinned by assets and property income growth — investment properties grew from RM4.38 billion in FYJune2011 to RM7.28 billion in the latest FY18. Distributable income for unitholders increased from RM176.8 million to RM281.9 million over the same period.

The manager also has strong incentives to expand the portfolio of assets. Fees are charged as a percentage of total asset value (including revaluation gains, which incidentally are non-distributable income for unitholders, at least until the properties are sold) and net property income. The manager also takes a cut on new property acquisitions and divestments (see Table 1). In other words, to boost its own fees, the manager needs to grow the assets.

That is what Sunreit has been doing. Most of the expansions in the past five years were funded by borrowings — gearing (borrowings as a percentage of total assets) rose from 31.1% in FY14 to 38.6% in FY18.

However, by the trust’s own calculations, it has only RM400 million to RM500 million debt headroom before hitting the loan covenant limit of 45% gearing. This effectively limits new acquisitions through traditional borrowings going forward. We believe this is why Sunreit has proposed issuing perpetual notes.

For those who are less familiar, perpetual notes/bonds/securities (commonly referred to as perps) have all the characteristics of debt (such as coupons at fixed rate that are payable semi-annually or annually) — save for one, a maturity. Because there is no maturity, the coupon rates on perps are higher than bonds.

Most perps do have a tenure, usually five-years callable by the issuers. But because issuers have the option to delay redemption indefinitely (though often with pricey consequences) perps are classified as equity in financial statements.

In other words, perps is an innovative way for companies to raise equity funds, without the dilution effect since the number of ordinary units remain the same. And because it is not accounted for as debt in the books, the reported gearing will actually fall on an enlarged equity base. This gives the impression of a stronger balance sheet than in actual fact.

Table 2 shows the impact on distributable income for unitholders assuming the RM10 billion perps are issued at 6% coupon and reinvested immediately in new properties. We have assumed the same property yields, operating expenses and manager’s fee ratio as those in FY18. 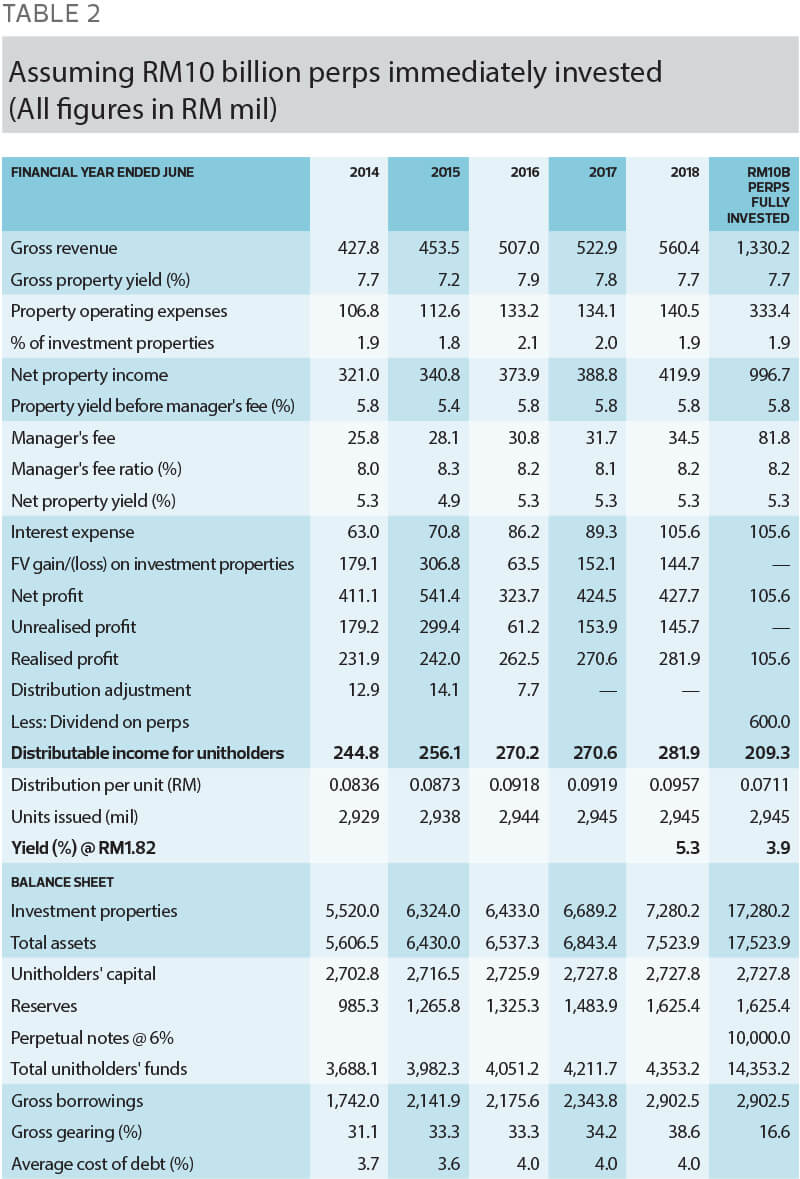 Net property income will rise from RM419.9 million in FY18 to RM996.7 million while manager’s fee will increase from RM34.5 million to RM81.8 million.

On top of this, the manager takes a 1% acquisition fee, which works out to RM100 million for properties totalling RM10 billion. This fee will be capitalised in Sunreit’s financials as part of acquisition costs.

Interest expense remains unchanged at RM105.6 million but there will be additional dividend on perps of RM600 million. Investors should note that although coupon payments (as with redemption) can be deferred indefinitely, they must be paid before any dividend to unitholders.

As a result, distributable income will fall from RM281.9 million to RM209.3 million. The 26% drop in DPU means yield to unitholders will decline from the prevailing 5.2% to 3.9%.

The non-alignment of unitholders and manager’s interests is clearly evident. The manager will earn more fees as long as total assets keep rising. And the fees have nothing to do with whether distributable income for unitholders rise or fall or for that matter, the level of risks being undertaken.

Reported gearing will fall to 16.6% because perps are not accounted for as debts. But if they were, as they should be, gearing would rise to 73.6% — well above the trust’s loan covenant as well as the 50% cap on all Malaysian REITs.

The most obvious conclusion to us, therefore, issuing perps is an avenue for Sunreit to circumvent gearing limits.

Otherwise, there would be no reason for it not to raise funds through traditional borrowings — Sunreit’s average cost of debt in FY18 was 4%.

It may be argued that the new acquisitions could be higher than its existing 7.7% gross property yield. This is possible. We cannot know for sure. Property yields hit a high of 8.8% in FY12 but has fallen from 7.9% in FY16 to 7.8% in FY17 and 7.7% in FY18. Should property yields continue to fall, that would mean an even larger drop in distributable income to unitholders.

It can also be argued that RM10 billion acquisitions made possible and funded by the perps would boost total assets base. This would, in turn, allow it to raise another RM5 billion borrowings at cheap 4% cost of debt — before it hits the 45% gearing limit based on the enlarged assets of RM17.5 billion. This of course assumes their bankers are ignorant of debts and leverage. The lower borrowing costs would mean improved average returns for unitholders.

By this time though, Sunreit’s total obligations would have risen to RM17.9 billion (including the perps) against total assets of RM22.5 billion (assuming the additio

nal RM5 billion debt is fully invested). That is equivalent to implied gearing of nearly 80% and 6.6 times unitholders’ capital of RM2.73 billion.

Mounting debt/perps servicing would make the trust increasingly vulnerable to any shortfall in property yields. All the risks are being borne by unitholders, who have little recourse since there is no breach in gearing limits.

Caps on gearing are there for a reason — to prevent excessive borrowings and risks for unitholders as well as creditors.

Note: These reports are intended for Malaysian residents only and are prepared without regard to your specific investment objectives, financial situation or particular needs. The information herein is obtained from various sources and we do not guarantee its accuracy or completeness. All views and advice are given in good faith but without legal responsibility. You should not regard the reports as a substitute for the exercise of your own judgement and you should seek professional advice for your specific investment needs. Our shareholders, directors and employees may have positions in any of the stocks mentioned.