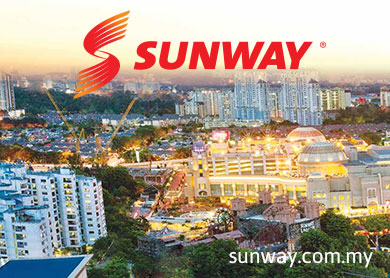 KUALA LUMPUR (Nov 13): Sunway Bhd soared as much as 10 sen or 3.15% to RM3.27 after a report by Insider Asia noted that the company’s fundamentals and valuations were attractive.

At 9:28am, construction and property firm Sunway pared gains to RM3.24.

“Sunway is one of Malaysia’s largest property and construction conglomerates with a solid track record and excellent reputation,” Insider Asia said.

Insider Asia's report is published in The Edge Financial Daily and theedgemarkets.com today.

According to Insider Asia, Sunway has a total landbank of 1,350 ha (3,376 acres) with potential gross development value of RM50 billion.

Unbilled sales stood at RM2.4 billion at end-June 2014. Insider Asia noted that Sunway was poised to replicate the success story of its Sunway Resort City concept in Iskandar Malaysia, Johor.