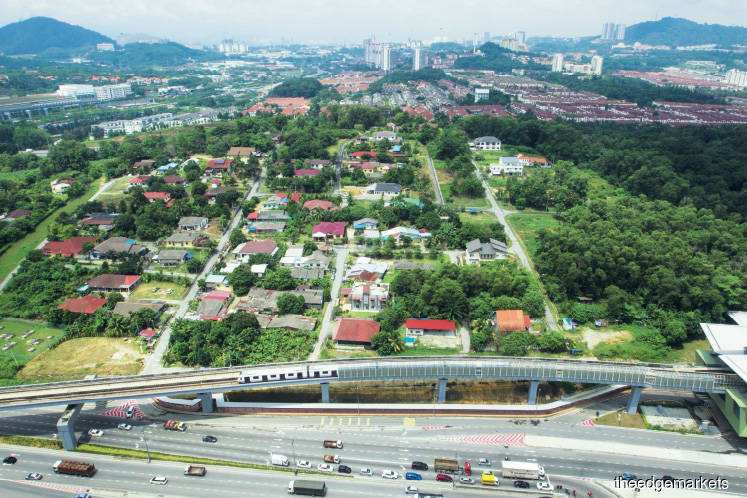 Today, Sungai Buloh has emerged as one of the fastest-growing areas in Greater KL with a wide choice of housing and amenities Property values in Sungai Buloh appreciated when the MRT SBK line was completed and have the potential to appreciate further once the new MRT Sungai Buloh-Serdang-Putrajaya line is completed.” — Wong The Sungai Buloh we know today is far different from its early days. Ask around and many people still remember when it was best known for the leprosy settlement, Valley of Hope. Today, Sungai Buloh has emerged as one of the fastest-growing areas in Greater KL with a wide choice of housing and amenities. Much of this can be attributed to its transport infrastructure, thanks to the development of new highways and rail systems.

It is easy to get from Sungai Buloh to established retail outlets such as The Curve and IKEA in Mutiara Damansara via the New Klang Valley Expressway (NKVE) or Damansara-Puchong Expressway (LDP). Kuala Lumpur city centre is an easy drive away via the Middle Ring Road 2 and Duta-Ulu Klang Expressway, says Savills Malaysia director of research and consultancy Amy Wong.

Sungai Buloh is also served the MRT (mass rapid transit) Line 1, the Sungai Buloh-Kajang (SBK) line, as well as KTM Komuter trains, which link the area to the KL city centre and other parts of the Klang Valley. The impact of the MRT SBK line on the property market in Sungai Buloh can be seen in the prices and demand, says Wong.

Sungai Buloh is set to undergo its next phase of growth in the coming years. The 2,230-acre Kwasa Damansara, Kwasa Land, is projected to generate a gross development value of RM50 billion over the next 20 years and have a population of 150,000 once it is completed, says Wong.

“2021, Sungai Buloh will be served two MRT stations. This will bring in more residents who can commute to work MRT,” she says, referring to the first phase of the MRT Line 2 that will be added from Sungai Buloh to Kampung Batu.  This will make Sungai Buloh a good area for homebuyers and investors. “Property values in Sungai Buloh appreciated when the MRT SBK line was completed and have the potential to appreciate further once the new MRT Sungai Buloh-Serdang-Putrajaya line (the entire MRT2 line) is completed.”

Considered the best Chinese restaurant in the area many residents, Restoran Lee Hong Kee at Kampung Baru Sungai Buloh is known for its home-style food and a menu that includes all the standard Chinese dishes. One of the highlights is the standing roast chicken — a whole roast chicken is served hanging from a hook.

Another local favourite is Jeff Lee Kitchen, located in Kampung Baru Sungai Buloh as well. Jeff Lee Kitchen is famous for its roast duck and its steamed chicken is also a must-try.

Also in Kampung Baru Sungai Buloh is Restoran Yin Her, which is located next to a pond that provides a nice view for diners. The signature dish is golden pumpkin butter chicken — chicken is fried with a coating of puréed pumpkin and butter with sliced curry leaves. Another recommended dish is the red tilapia steamed in Nyonya style.

Kampung Baru Sungai Buloh’s Restoran LYJ is famous for its poon choi (basin dish). It is a traditional Cantonese dish that offers a variety of the best delicacies in a basin (traditionally wooden) to be shared with a group of people.

The poon choi here comes in two layers. The dry ingredients — scallops, chicken, duck, prawns, ribs, abalone and oysters — are on top while the wet ingredients — mushrooms, chicken feet, pork knuckle, fish, fish maw and stewed pork — are at the bottom. The pork lard rice is also a must-try.

If you are looking for vegan and organic bread, Whitebrickoven Food is the place to go. Named after the wood-fired brick oven that the owner and baker Martin Prior aka Mustafa Abdullah built himself, Whitebrickoven Food operates from his home. Together with his wife Mardia Nasir, Mustafa bakes traditional European pastries with organic flour from France and Germany. They also mill their own wholemeal flour on a stone mill imported from East Tyrol.

All pastries are made from homemade levain derived from sourdough and everything is completely organic and vegan. Their bread is made to order so head over to their website to make your purchase. The couple open the bakery to the public only on Sundays and serve a variety of soups, quiche, pastries and bread products such as pretzels and bagels.

Sungai Buloh is also known for its many plant nurseries, which are closely tied to its history.

For some indoor entertainment, head to Flip Out Trampoline Malaysia in Taman Industri Sungai Buloh. It has various areas for adults and children alike to jump around and burn some calories.