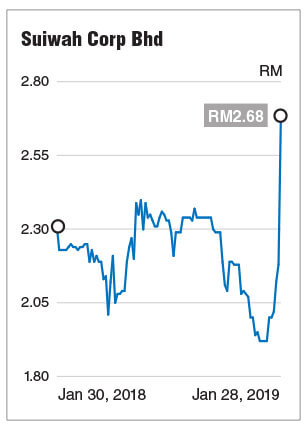 KUALA LUMPUR: Penang-based Suiwah Corp Bhd shares jumped as much as 65 sen or 30% yesterday morning after the Hwang family, holding a 30.91% stake in Suiwah, announced its plan last Friday to take the company private at RM2.80 per share.

Before the privatisation offer, the counter was trading between RM1.92 and RM2.40 over the last 12 months. The stock’s final price yesterday was just 4.48% lower than the RM2.80 offer price.

The stock has jumped 62 sen or 28.4% above its closing price of RM2.18 on Jan 23, just before trading on the counter was suspended pending the release of last Friday’s announcement.

The privatisation offer was made by its major shareholder Suiwah Holdings Sdn Bhd (SHSB) — the private investment vehicle of Suiwah managing director Datuk Hwang Thean Long, the group’s founder — and parties acting in concert (PACs) with it, by way of a selective capital reduction and repayment exercise (SCR).

In the letter, SHSB said the entitled shareholders own 39.55 million Suiwah shares collectively and will get a capital repayment of RM110.75 million or RM2.80 per share under the proposed SCR.

SHSB said the privatisation plan comes as Suiwah shares had been thinly traded. SHSB also viewed Suiwah’s continued listing brings a minimal benefit to the group and its shareholders.

As the capital reduction is higher than the current share capital, a bonus issue is proposed to raise the share capital first. The proposed SCR is expected to be funded by internal funds and bank facilities obtained by Suiwah.