MORE and more fashion designers are putting their stamp on design-focused suites and hotels. This has proved to be an incredible pairing, offering us a glimpse into the private worlds of the designers behind fashion’s ruling houses and the chance to live in their creations. From distinctive nouveau classic to avant-garde, designers exercise their creative muscles to translate haute couture into sublimely stylish escapes. 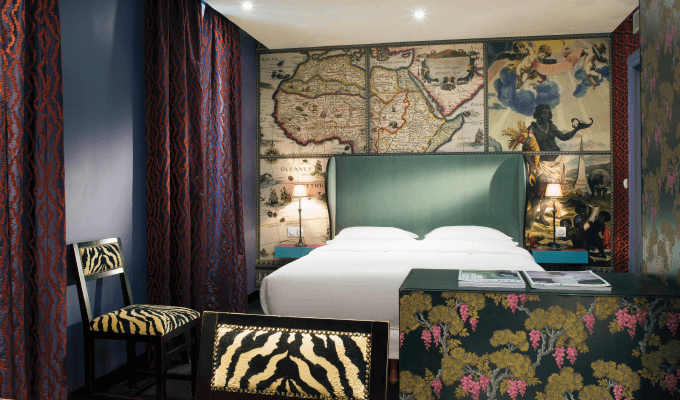 Hôtel du Continent has been around since the 19th century, located just a stone’s throw from Place Vendôme and the renowned Rue Royale. Offering 25 rooms in three different sizes, this plush boutique establishment was recently given a makeover by French stylist and couturier Christian Lacroix, who last dabbled in hotel design when he decorated Hotel Le Bellechasse and Hôtel du Petit Moulin in Paris as well as certain areas of Sofitel SO Bangkok hotel in Thailand.

For Hôtel du Continent, he created a globe-trotting atmosphere with each floor dedicated to a different continent — Europe, Africa, Asia, America and Oceania — and in the words of the designer in a press statement, “far from any anthropological or strictly ethnic preoccupation but rather with this fanciful distance known to ancient travellers who brought back with them not only scientific information but also tales and dreams”.

The effect is charming and playful with a palette bursting with vibrant colours and rich tapestries, prints, postcards and fabrics with patterns and embroidery sourced from all over the world.

“Africa” is the most fun of all the floors. Here, the designer has mixed precious fabrics with kitsch wallpaper, traditional motifs with Tangier gird patterns and trees with clusters of flowers. Animal-print accents liven up the rooms, softened with monotone headboard and linen. 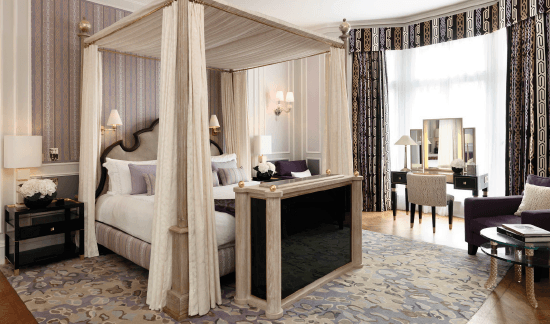 Located in the heart of London’s Mayfair, Claridge’s is one of the city’s most iconic hotels with an Art Deco heritage that reveals itself in the restaurant and main entrance that was designed in the 1920s by Basil Ionides and Oswald Milne. Diane von Furstenberg, of vibrant print and wrap dress fame, was commissioned to lead the refurbishment of 20 guest rooms and suites in 2010. The result is a breath-taking series of rooms, each one with a distinct feel and personality. Working with a rich palette of prints and bold colours, von Furstenberg has built on the hotel’s Art Deco feel with contemporary cool and a splash of adventure. Deep hues and wild prints are tempered with monochrome classics. Rich, sumptuous fabrics are used generously throughout the rooms, from ikat to cashmere blankets, and a kaleidoscope of patterns is boldly employed, some clashing yet offering a stunning visual. While predominantly white, wall panels in stone and pastel shades add to the soft mood of the bedrooms. Each corner features beautiful details such as finely crafted writing desks and chests of drawers that look like vintage travelling trunks. On the walls are various framed pictures taken by the designer on her travels. 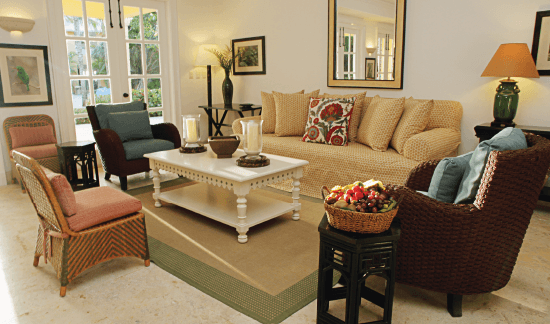 The late Oscar de la Renta was greatly admired not only for his elegant gowns but also his flair for décor. A partner and resident of the Puntacana Resort & Club in his native Dominican Republic, de la Renta was called upon to redecorate the Tortuga Bay Hotel — an eco-luxury resort within the 15,000-acre enclave.

The undertaking was completed just before his untimely death last October and the result is nothing short of a wonderful, lush tribute to the designer.

This was a labour of love for him, evident in the elegant way he managed to infuse his Dominican heritage into the design of each of the property’s 13 canary-hued villas. You can see touches of inspiration taken from the historic 18th century plantation houses of the Dominican Republic — furnishings are made from natural and native materials, such as mahogany wood, wicker and rattan — featuring plush fabrics from de la Renta’s home collection. Frette-clad four-poster beds and private terraces add to the air of romance. 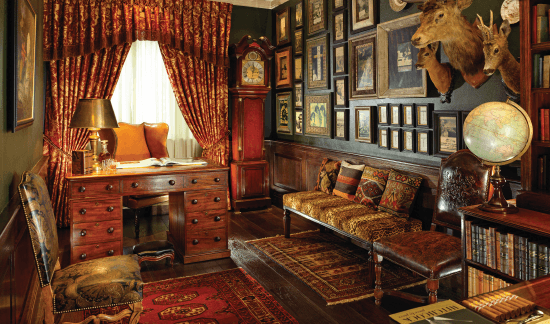 Just around the corner from Buckingham Palace is Taj 51 Buckingham Gate Suites and Residences, comprising three Victorian townhouses, each one restored to its former glory. Within are 85 luxurious suites and residences complete with bespoke and personalised touches.

Following the success of its Jaguar Suite — a world’s first conceived by Jaguar design director Ian Callum — Taj 51 Buckingham Gate commissioned a second concept suite. The Cinema Suite was unveiled in 2012, created by acclaimed Indian designer Sabyasachi Mukherjee. All 1,832 sq ft of the two-bedroom suite has been dedicated to the history of film and takes inspiration from motion pictures across the globe.

One bedroom features old Hollywood glamour while the other draws on Indian colonial aesthetic and renowned Indian artists Guru Dutt and Merchant Ivory. In the living room is a dizzying array of visual references to Majidi, Wong Kar-wai and Almodovar. The effect is a chic clutter of history books, vintage mirrors, portraits and drawings among leather Chesterfield seats and an eclectic collection of film paraphernalia, glassware, vintage rugs and objets d’art. The walls are decorated with striking Nina Campbell wallpaper in burnt orange, black and red, and selected curios, enriched by the use of sumptuous silk drapery throughout the suite. 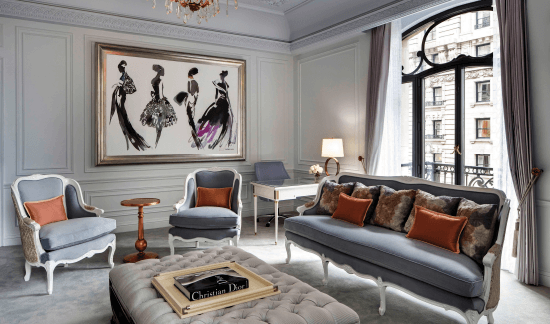 Following its collaboration with Tiffany & Co and Bottega Veneta, St Regis has partnered the house of Dior to create the Dior Suite at its hotel in New York. This isn’t the first time the hotel has tied up with the Parisian haute couture house — there was one before that was launched in 1991.

This is what the hotel described as “a reinvigoration of the partnership” when the suite was unveiled to the public in 2011.

The Dior Suite employs the same colour palette of greys, purples and whites and design details as that of the Dior atelier in Paris, including elaborate mouldings, French Louis XVI-style furniture and ornate crystal chandeliers. Glamorous statement pieces are found throughout the suite, creating an overall feel that recalls the chic and simplistic elegance that the great designer himself is known for in his creations. On the walls of the living room are framed sketches of his designs, an elegant tribute to the couturier. It helps that the space also boasts exceptional views of Central Park and New York’s famous Fifth Avenue. 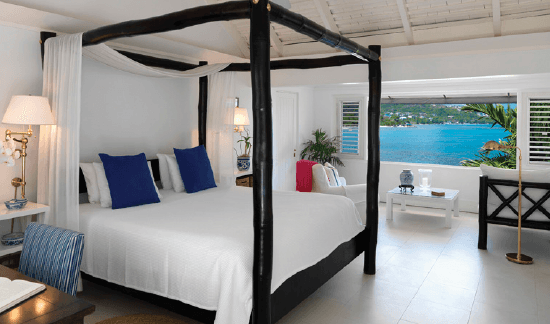 American designer Ralph Lauren and his wife bought their first house in Jamaica more than two decades ago. Their property sits in the grounds of Round Hill Hotel and Villas, but at the highest point, just west of Montego Bay.

The lush island resort boasts a guest list of world leaders and cultural icons with 27 villas that are rented as complete residences or split into separate rooms and suites.

Over the years, Lauren has taken a personal interest in Round Hill and his passion for the place can be seen in his influence in much of the aesthetic of the resort, particularly that of the oceanfront rooms in the Pineapple House. The style is described as “island-contemporary” — breezy and refreshing in sharp whites and blues, it feels a little nautical with a relaxed chic sensibility. There are four-poster king-sized beds in dark wood in the bedrooms, matched with blue-and-white porcelain, pink rugs and brass lamp fixtures.

All the rooms have high ceilings and gorgeous views of Montego Bay. 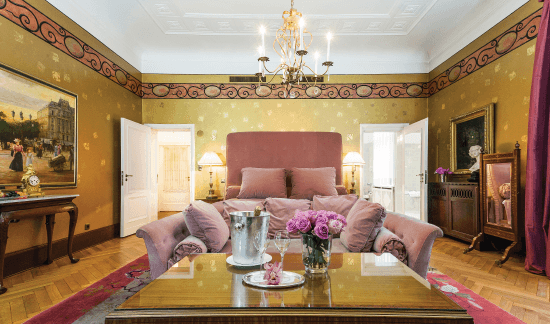 Schlosshotel Im Grunewald in Berlin was formerly a palatial manor built at the turn of the 20th century in the lush, affluent neighbourhood of Grunewald (which translates into “green forest”). Today, it is an elegant boutique hotel, restored to glory and decorated by no less than Karl Lagerfeld, artist and designer extraordinaire and creative head at the house of Chanel.

Millions of euros have been invested and one can see that edgy yet glamorous luxury Lagerfeld is known for in a harmonious coming together with the romantic elegance of the building’s original Art Deco impressions.

“Standing in the tradition of Berlin luxury hotels — with all of today’s modern conveniences. A blend of contemporary design and the typical Berlin style of circa 1910, what we call ‘reform architecture’, of which this mansion now under historical conservation order is a prime example,” the designer says of Schlosshotel in a press statement.

Lagerfeld loves textures and you see this in the rich and sumptuous details. There are silk-covered walls and gilded mouldings. Curtains flow and cascade while elaborate chandeliers shimmer over colourful art and antiques.

The Grunewald Suite is where you can really immerse yourself in this pleasure palace. Done up in a soft Damask rose hue and gold that juxtaposes the dark wood floors, the suite boasts extravagant furniture in plush fabric and leather upholstery. 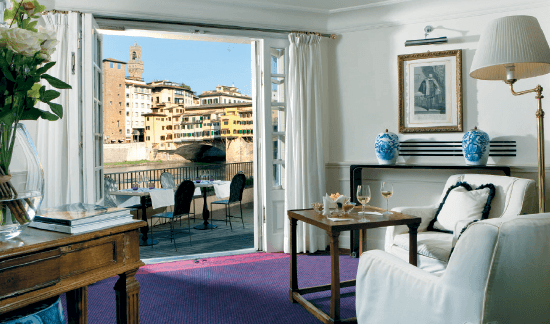 The Lungarno Collection is a boutique hospitality company specialising in luxury design hotels and villas owned by the Ferragamo family. Run by Leonardo Ferragamo, its portfolio of properties and the experiences they promise are inspired by the hospitality and grand style that his family is known for.

Hotel Lungarno was the company’s first — a 16th-century grand residence that was restored in the 1990s and turned into a contemporary hotel that was “traditionally Italian, yet beautifully international — just like its founder Salvatore Ferragamo”.

The décor of the hotel features a mix of modern and contemporary furnishings against a crisp backdrop of ivory and ocean-blue. Interior designer Michele Bonan says he chose blue and white to accentuate “the sense of being, endlessly drifting on the Arno river but with the Ponte Vecchio (Florence’s iconic symbol) as your point of reference”. He wanted to evoke the sensation of being on “a grand cruise ship sailing down the river”, taking advantage of the unique fact that this period townhouse is the only one that literally sits over the Arno. Enriching the hotel’s nuova classicità design are the 400 pieces of art seen throughout the hotel, from the lobby to the guestrooms, including works by Picasso, Bueno and Cocteau. 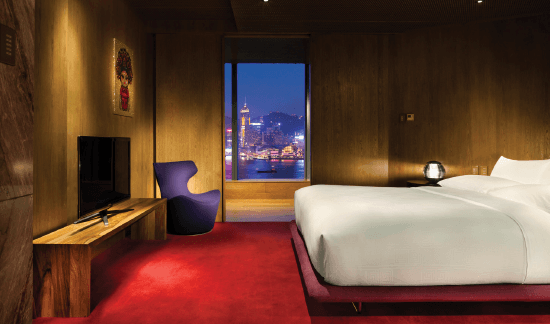 In the heart of Tsim Sha Tsui East in Hong Kong is Hotel ICON, a stylish hotel that ranks among the city’s most symbolic landmarks. A design hotel at its core, it showcases the refined touches of Hong Kong’s creative talents, such as Barney Cheng, Tommy Li and Vivienne Tam.

The Designer Suite by Vivienne Tam is one of the hotel’s highlights, offering stunning panoramic views of Victoria Harbour. It was personally curated by Tam in the same flair of China chic we see in her fashion creations. Building on a palette of rich woods and textured marble with deep-red accents, the 80 sq m space adheres to the principles of feng shui. The high ceilings are inspired by traditional Chinese screens while the bedroom is inspired by Shanghai’s Art Deco era. Anchoring the décor in the living room is the ultra-stylish “Ploum” sofa by Bouroullec Brothers and a Japanese cherry wood table serving as a desk. Special touches include the custom-made Opera Girl portrait made of Swarovski crystals and a white relief artwork deemed a “found object” from the designer’s New York apartment.

Tam says in a press statement: “Like one’s home, this space is meant to change and grow. I wanted it to be uncluttered, a free space to dream.”