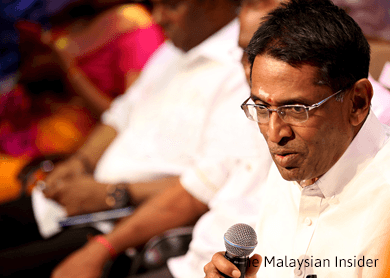 KUALA LUMPUR (Feb 16): MIC deputy president Datuk Seri Dr S. Subramaniam will contest the number one party post, challenging his boss Datuk Seri G. Palanivel for control of the fractured party that has been in turmoil over election results for its office bearers.

Subramaniam announced his move yesterday in a press conference before a group of about one thousand MIC delegates here.

Also present and in support of his decision were party vice-president G. Saravanan and the heads of the party's Youth and Women's wings.

Subramaniam said he was spurred to contest the post because he felt change was urgently needed in the MIC leadership, and he did not want the party to contest the next general election while it was weak and weighed down by internal turmoil.

"If we want to win in the 14th general election, efforts must be made to strengthen the party starting from today. If we don't solve it within a year, it will be difficult to bring the party forward," he said.

The health minister said he had obtained the support of two-thirds of the party's grassroots, with 102 out of the 150 MIC division chiefs and 2,500 of the 3,700 branches on his side.

"This is more than the majority. I can see that I have garnered the majority support to contest.

"If Palanivel takes heed of this and compromises by announcing he wishes to step down as president, this matter can be solved just like that.

"Otherwise, we will fight," he told a press conference after making the announcement.

Subramaniam said the large turnout of party delegates yesterday for a meeting with the deputy president was unprecedented for MIC.

He said this proved the grassroots had lost faith in the top leadership, following the internal crisis that had forced the Registrar of Societies (RoS) to dissolve the central working committee (CWC) and call for re-election.

"If they came willingly, it means in their hearts they are not happy," said Subramaniam.

Before his announcement, Subramaniam told the grassroots leaders that the 2009 CWC would lead MIC for the time being until a re-election was held, a proposal that those in attendance unanimously agreed upon.

He said he would meet with Barisan Nasional (BN) president Datuk Seri Najib Razak tomorrow to convey his intention to contest the presidency in fresh elections that are to be called in May.

Subramaniam also commented on Palanivel's decision to suspend the membership of A.Sakthivel, Senator Datuk Jaspal Singh and Datuk V.Mogan for a year, calling it unfair.

He said they had a right to attend MIC meetings as RoS had recognised the legitimacy of the 2009 CWC.

"Their suspension is baseless and they must appeal. We will give them our full support because it is not in line with the RoS's decision."

When asked if he was still eyeing the presidency, Saravanan said he had thrown his full support behind Subramaniam and wanted the dispute over the post resolved immediately.

"I support Subra completely. If the presidency issue is resolved, all our problems will be resolved. Our problem is with the president," said Saravanan.

On February 3, Saravanan had reportedly said he may contest either the presidency or the number two post in the party if he received the mandate and support of the grassroots.

"I will discuss this with my supporters, who knows maybe I will contest the deputy or presidency, it all depends on my supporters," he told reporters during the Thaipusam celebration in Batu Caves.

The MIC re-election will begin in May until July, with the branch level casting their votes in April, The division level in May and the central level in June and July.

Palanivel, however, has said that he would take legal action against the RoS if it refused to rescind its order to the party to hold fresh elections.

Najib, meanwhile, said he would summon both Palanivel and Subramaniam this week to meet him over the conflict.