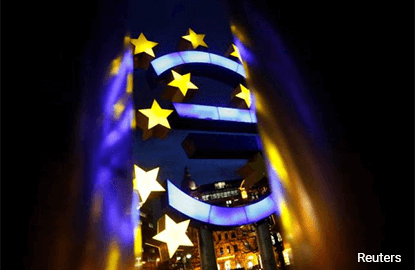 FRANKFURT/PARIS (Feb 17): Rock-bottom interest rates hurt more big European banks in 2016 than in the previous year, but the worst could soon be over with the prospect of rising borrowing costs rippling from the United States to Europe.

Low rates, money printing and a penalty charge for hoarding cash have been at the heart of attempts to reinvigorate the 19-country euro zone economy in the wake of the 2008-09 debt crisis.

But the policy has been politically divisive, prompting fierce criticism from famously thrifty Germans as the returns on savings in Europe's biggest economy dwindled to nothing.

It also imposed a heavy cost on still fragile banks, turning deposits into a hot potato that many would rather avoid so as not to pay charges to their central bank for storing them.

Last year marked a low ebb, according to a survey by Reuters of 20 large European banks conducted in mid-February.

While seven in that group saw net interest income fall during 2015, that number increased to 12 in 2016, with the average dip more than 7%. That was steeper than the roughly 5% slip on average in 2015.

Such income is the difference between interest charged on, say, a loan, and the cost of holding a deposit. It is a bellwether of earning power, closely watched by investors, and its decline bodes ill for the sector.

Many executives are now pinning their hopes on a change in direction for central banks given that rate hikes appear to be on the cards in the United States this year — and ultimately a paring back of easy-money policies in Europe.

"It's usually the US that leads the pack," said Charles Goodhart of the London School of Economics, a former member of the Bank of England's Monetary Policy Committee.

"If (US President Donald) Trump does manage to get an expansionary fiscal policy, there will be increases in interest rates," he said, adding that the effect would also be felt in Europe.

Trump has pledged to stimulate growth in the world's largest and most influential economy through a combination of heavy infrastructure investment and deep corporate tax cuts.

In December, the US Federal Reserve raised interest rates and signalled a faster pace of increases in 2017.

Lars Machenil, chief financial officer of France's BNP Paribas, one of Europe's biggest lenders, said the difference could be hundreds of millions of euros of extra income.

"The lowering of interest rates has had a negative effect on the top line. If that would be reversed, we would see something similar back ... but it will take time," he said. Low rates cost BNP 1 billion euros of lost revenue between 2013 and 2016.

In 2016, Switzerland's Credit Suisse saw interest income dip by about 19%, while at Germany's Commerzbank and Deutsche Bank, it fell by about 13% and 8% respectively, the Reuters survey found.

UniCredit's interest income dipped by about 6%. Spain's Bankia saw a drop of about one fifth.

While successful in helping a brittle euro zone economy gradually revive from the debt crunch in the short term, zero or negative rates have, in the eyes of critics, struck at a central tenet of banking — lending on the back of deposits — and turned the principle of saving for retirement on its head.

There are signs that the struggle of frustrated lenders is being noticed in Frankfurt, seat of the European Central Bank.

Yves Mersch, a member of the ECB's executive board, the nucleus of euro zone policy-setting, recently said it needed to take interest rate cuts off the table, which would mark a retreat from its policy of cheap money.

"How much longer can we continue to talk about 'even lower rates' as being a monetary policy option?" Mersch said.

Penalising banks for storing money makes holding deposits, traditionally the bedrock of any lender, more expensive, and this prompts some to steer savers towards fund products for which a fee can be charged.

UBS CEO Sergio Ermotti has warned that the world's biggest wealth manager could pass on the cost to depositors if sub-zero rates persist. So far, only one Swiss bank, Alternative Bank Switzerland, has imposed such charges.

Another way around the problem is keeping deposits low and bolstering lending.

Sweden has generally done better in this respect than most. That is something that Barclays analyst Mike Harrison attributes to a lower average level of deposits, which cost a bank money if it cannot lend and must pay a penalty for storing them at the country's central bank.

The ECB imposes a so-called negative rate equivalent to 4 euros annually on each 1,000 euros that lenders deposit with the central bank. Banks in Sweden and Switzerland, outside the neighbouring euro zone, pay a similar charge.

"Swedish banks have managed best to avoid the impact of zero rates due to the fact that they held fewer deposits," said Harrison. "That made it easier to earn a healthy margin on their loans."

Swedbank, for instance, boosted its lending last year by 7% to about 1.5 trillion crowns, while its deposits from the public were roughly half that and rose more slowly.

The Netherlands' ING and Sweden's Swedbank, where lending outpaced the inflow of deposits, posted a roughly 9% and 3% increase respectively in such interest income, the Reuters study found.

Germany's Commerzbank tried a broadly similar strategy, cutting deposits from corporate customers by about 22 billion euros. But the cost of penalty or negative rates still squeezed its income by more than 200 million euros in 2016 — roughly a third less than its net profit for the full year.

"There is finally hope of a change in interest rates," he said. "The tone among policymakers has changed. The evidence is clear. I think we could see rates rise next year."