A stronger FY2017 seen for Zhulian 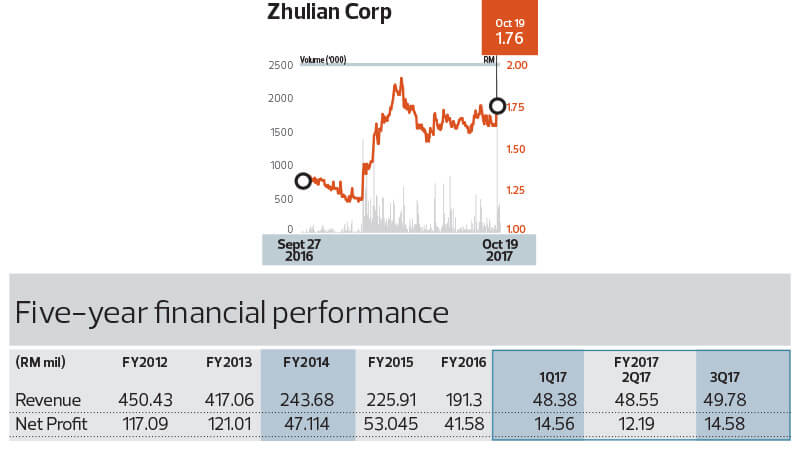 This expectation is reflected in its share price gains since the beginning of the year. Year to date, the counter has risen 40% to RM1.75 last Thursday, from its RM1.21 close on Dec 30 last year, for a market capitalisation of RM809 million. On April 10, Zhulian’s share price hit a 52-week high of RM1.92 but it has corrected since then.

The counter has seen some renewed interest lately, after its Oct 11 announcement of its 3QFY2017 earnings, with a 138% year-on-year increase in net profit to RM14.58 million.

The MLM company has attributed the improvement in net profit this year to improved margins and the increase in profit contribution from its Thai subsidiary. For 9MFY2017, the subsidiary’s profit contribution grew 19% y-o-y to RM13.91 million. But even as it looks like things are picking up again in Thailand, it remains to be seen if the earnings growth trajectory can be maintained.

In 2013, its share price rose beyond the RM4 level but that ended the next year when its main market — Thailand — suffered from political instability, which dragged down earnings and caused the share price to plummet.

Apart from Thailand, Zhulian’s other fast-growing export market is Myanmar. Despite entering the market only in 2015, the MLM group has seen its distribution force in the country more than double within a year from 14,216 to 40,396 people last year.

In its 3QFY2017 results announcement, Zhulian also attributed a 5% y-o-y increase in 9MFY2017 revenue to RM146.68 million to higher export revenue from Myanmar. However, no detailed breakdown of how much it contributed to total revenue was provided.

In its 2016 annual report, it stated that the F&B range is the largest contributor to its top line, at 34% of total revenue. This is followed by its nutritional health products (23%) and personal care products (18%).

Interestingly, Zhulian’s in-house manufacturing capabilities have allowed it to reap higher gross and net profit margins. Over the past five years, Zhulian’s profit margins have been consistently above 20%, with the exception of FY2014 — compared with its peer Hai-O Enterprise Bhd, whose profit margins hovered in the mid-teens over the same period.

Based on its share price of RM1.75, Zhulian is trading at a historical price-earnings ratio of 13.18 times — cheaper than its peer Hai-O, which has a PER of 27.7 times.

As at Aug 31, Zhulian had a cash pile of RM132.25 million, equivalent to 28.8 sen per share, and no borrowings. It also has an attractive dividend yield of 3.43%, based on its share price of RM1.75. Over the last two financial years, it has declared total net dividends of six sen per ordinary share annually.

However, while it is reporting robust earnings growth, Zhulian remains cautious about the outlook.

“The current environment for our present business segments continues to be challenging due to economic uncertainties. The group will continue its moves to revive the domestic market and at the same time explore the untapped markets in other countries in Asean. Barring any unforeseen circumstances, the board is cautiously optimistic of its future prospects,” it says in its 3Q results announcement.

It adds that it is looking for opportunities to venture into new businesses while looking forward to improving the contribution from its Thailand and Myanmar markets. Zhulian is also venturing into new markets — it is in the final stages of the company incorporation process in Cambodia and Laos.