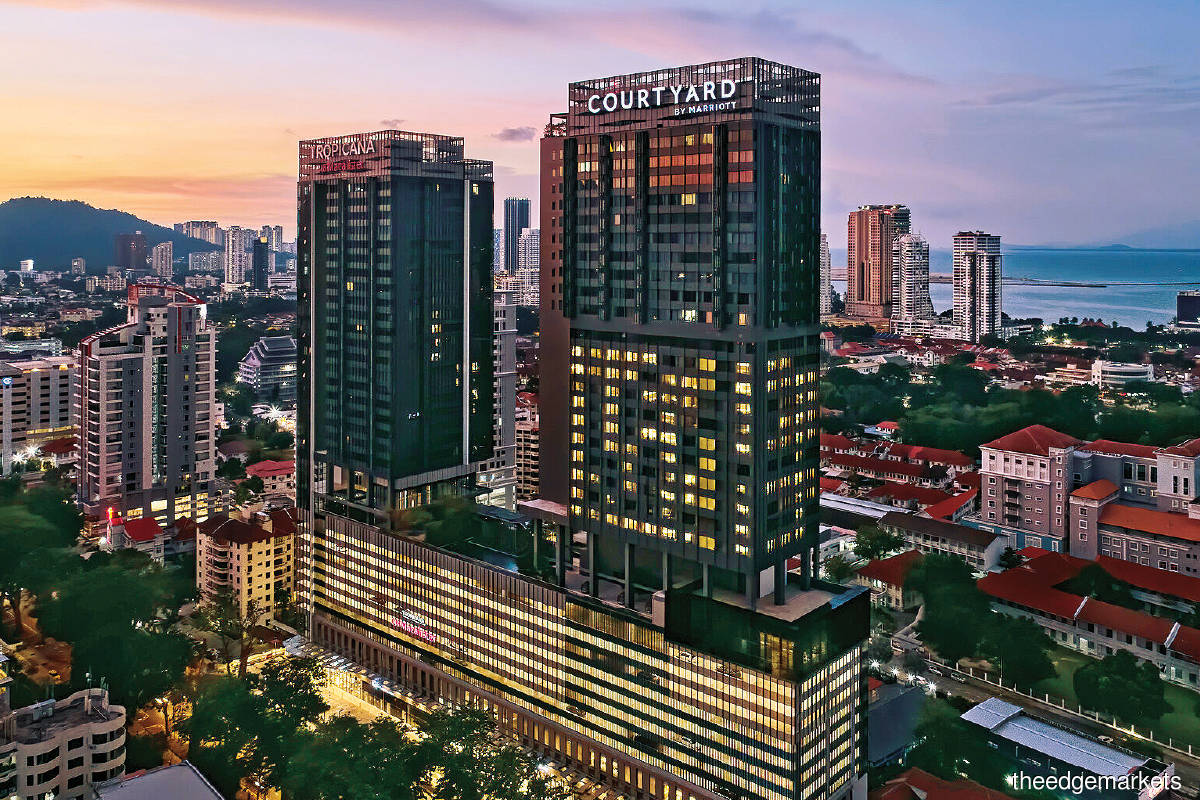 Courtyard by Marriott Penang, which opened in September 2020, is among the recent additions to Marriott’s portfolio. (Photo by Marriott)

TRAVELLERS flocking to Marriott International-run resorts and hotels in Malaysia are contributing to the group’s stronger-than-expected performance post-Covid-19 as it aggressively expands its portfolio in the country. Marrriott has already confirmed 26 management contracts for hotel openings through 2030.

“In 2022, we are looking at an 80% RevPAR (revenue per available room) recovery [for Malaysia] since borders are reopening. We think we can reach the 2019 [level] as a market this October,” Rivero Delgado Ramos, Marriott International area vice-president for Singapore, Malaysia and Maldives, tells The Edge in an interview, noting strong domestic demand.

“Travellers favour strategically located hotels and are willing to spend more on rooms and food and beverage.”

The expected operating numbers for Malaysia are decent relative to global performance for the operator of brands such as The Ritz-Carlton, St Regis, JW Marriott, W, Sheraton and the Westin.

Marriott International Inc, whose second-quarter earnings topped Wall Street estimates on Aug 2, had said RevPAR increased 70.6% worldwide, 61.1% in the US and Canada and 87.8% in international markets compared with the same period the year before. It had also guided third-quarter earnings to be better than the second-quarter’s. Marriott CEO Anthony Capuano had reportedly told investors that “the shift of spending towards experiences versus goods, sustained high levels of employment and the lifting of travel restrictions and opening of borders in most markets around the world are fuelling travel”.

An increase in RevPAR generally means either the average room rate or occupancy rate is increasing, or both.

What’s more, the better operating numbers come even though flights are not yet operating at full capacity. “International flight accessibility is still around 44%; we are far behind the [capacity] levels of 2019,” Delgado points out. “Despite not having full flight capacity, business demand is coming back very strong. Guests are looking forward to returning to our hotels and spending time with us.” Already, Marriott group resorts are seeing guest spend per room per day “heavily increased”. Delgado says that not only has the volume of domestic tourists risen, they are also spending more. “It’s a lifestyle and necessity unlike before when it (travel) used to be perceived as a luxury.”

“I believe that before year-end, we will be getting very close [to], if not at, the same level as 2019,” Delgado says, adding that this pace of recovery, could mean that Marriott will be able to enjoy an even better year in 2023.

Demand from the domestic market has seen double-digit growth, following the pandemic. With China’s borders remaining closed, Delgado says, the domestic market continues to be a critical player for all of the group’s destinations in Malaysia. She foresees that this trend will continue in 2023. Accordingly, Marriott is focusing all its efforts on domestic tourism. It is noteworthy that prior to the pandemic, China was Malaysia’s second-highest foreign tourist arrival market.

Following the demand from the domestic market, Marriott has seen not only its domestic database improve but its domestic presence as well. For example, its Miri, Mulu and Kota Kinabalu markets are getting busier among its loyalty members. And within Southeast Asia, the Marriott pipeline remains the largest in Malaysia, with more than 40% in the luxury and upper upscale tiers.

“Seven years ago, we didn’t have so many hotels, but now the number of hotels that are operating and opening on a yearly basis is fantastic … We have 26 active projects in Malaysia [and] are right now evaluating construction. The biggest supporters are the existing hotel owners that are growing with us. We are certainly seeing the result of many years of presence here and our plan is robust and strong and very healthy,” Delgado says. The 26 confirmed hotel management contracts will open between now and 2030.

The 913-room Renaissance Kuala Lumpur, located on the corner of Jalan Sultan Ismail and Jalan Ampang in Kuala Lumpur, will be relaunched next year. The property, which is currently undergoing renovation and refurbishment, will feature both the Renaissance (400 rooms) and the Four Points by Sheraton Kuala Lumpur (513 rooms) brands. The 239-room The Perhentian Marriott Resort & Spa and the Sheraton Kuching in Sarawak are slated for opening in 2024. Last Thursday, Marriott signed an agreement with Hap Seng Consolidated Bhd to open a 352-studio Marriott Executive Apartment Kuala Lumpur in 2024.

So far, Marriott has 31 managed hotels and resorts and five franchise hotels across 18 brands in Malaysia. It has properties in Kuala Lumpur, Selangor, Penang, Langkawi, Johor, Pahang, Sabah and Sarawak and will make its debut in Melaka this year. Incidentally, its portfolio in the region is widening. Marriott will open its 1,000th property in Asia-Pacific this year.

Asked whether brands such as Residence Inn and TownePlace Suites — which offer full kitchen facilities and cater for longer-stay guests — would work in Malaysia, Delgado says all brands would work in Malaysia as they each cater for a different target market. To be able to bring the brands to Malaysia, however, one would have to ensure that the market is ready for them.

Even as the group anticipates recovery, it is not without its challenges. The hospitality industry is encountering labour shortage issues as travel has resumed, following the lifting of the Movement Control Orders. Some hotels with room inventory of more than 200, for example, have had to resort to shutting some floors because they just do not have enough staff to manage the crowd.

Accordingly, Delgado says Marriott is making an effort to attract, retain and develop talent. This includes offering incentives such as flexible work arrangements as well as career growth, saying goodbye to the time when someone who joined as a bellboy would stay a bellboy. As such, Marriott is conducting a pilot project to see whether employees can do two jobs. “Instead of having them join one department, we will see whether they can join two or three departments, and then we will see the outcome from it,” she says.

“We are well prepared to weather a potential recession as we have solid plans in place to push us forward and achieve our business goals.” Meanwhile, the group continues to adapt, innovate and expand the business.

“As families and friends are travelling in groups, we are seeing a recovery in group bookings, which have traditionally been a key driver for the company,” she says, adding that this has the potential to neutralise any potential levelling-off in leisure demand or pricing power in a potential recession.

Meanwhile, to stay ahead of the pack, apart from upping guest experience, Marriott is also focusing on its “digital-first strategy” as it believes social media platforms are the most effective way to directly connect with its guests in various markets. “We focus on delivering branded experiences through Marriott Bonvoy, Marriott’s travel programme, and Marriott Bonvoy Moments.

“Social media allows us to not draw attention to ourselves, but to see our guests in their own spotlight. We create user-generated content to capture the Millennials’ and Gen Z’s attention as they are more spontaneous and do not buy into old-fashioned travel norms,” Delgado says.

Marriott has also collaborated with GrabFood and features 14 participating restaurants in its hotel chain. If the momentum continues, it would be among the earliest in the industry to emerge from the tough pandemic years of 2020 and 2021.