The businesses along Jalan Mendaling. Pictures by Ethel Khoo/The Edge 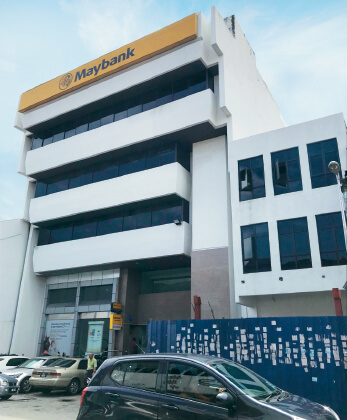 The Maybank at Jalan Tukang 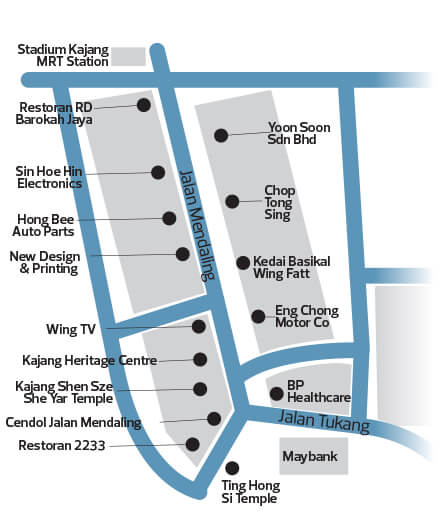 As a first-time visitor to Kajang town, I navigate its narrow roads and busy traffic nervously. Upon arriving at Jalan Mendaling, I cannot find any parking space on the street and after circling around for a while, I give up and decide to park at Plaza Metro Kajang. Luckily, it is within walking distance of Kajang Heritage Centre where I am meeting its director, former Kajang assemblyman Lee Kim Sin, to get an insight into the town’s history.

Before we start the interview, Lee takes me to an old kopitiam in Jalan Mendaling, called Chop Tong Sing, for coffee. The shop occupies the lower floor of a 1½-storey shoplot and, according to Lee, it is one of the few old coffee shops that have survived in Kajang.

The owner Jane says her mother had started the business in 1957 and that she took it over when her mother retired. Her own children have no interest in continuing the business, she says regretfully, and she has no idea what the future holds for the kopitiam.

The Kajang Heritage Centre, which was set up in 2001, is located on the second floor of a 4-storey shoplot in Jalan Mendaling. It is filled with old things such as typewriters, clothing, tableware and furniture, photos and documents, many of which were rescued when old businesses closed and the buildings were demolished.

Next to the centre is the Kajang Shen Sze She Yar Temple or Kajang Shi Ye Gong Temple. As the first temple to be built in Kajang, it is more than a century old, and in 2016, the Selangor government allocated RM50,000 to restore it.

Jalan Mendaling is linked to Jalan Tukang and at the intersection, there is another Chinese temple — the Ting Hong Si Temple.

Businesses in these two streets include restaurants, car repair workshops, electrical shops, stationery outlets, a bank and a clinic.

Lee says efforts are being made to preserve the few heritage buildings left in Kajang, including the temples and other places of worship, administrative buildings and prewar shoplots.

MRT1 has three stations — Sungai Jernih, Stadium Kajang and Kajang — in the town, of which the Stadium Kajang station is located at the intersection of Jalan Mendaling and Jalan Stadium.

Lee says the town is slowing down and with some businesses having closed down, there are a number of unoccupied shoplots in Jalan Mendaling and Jalan Tukang.

Metro Homes Sdn Bhd director See Kok Loong says only a few of these shoplots have been transacted in the past three to five years. They are valued at about RM800,000 to RM1 million. According to a recent posting on iProperty.com.my, the asking rent for a 1½-storey intermediate shoplot in Jalan Mendaling — with a built-up of 3,960 sq ft — is RM3,600.

“Even though the long-awaited MRT1 is up and running, we still haven’t seen much improvement in the rental rates or transaction activity. The heritage programme might change the area into a tourism spot like Melaka, Penang and Ipoh,” says See.

Tin mining was the town’s main trade in the early days but that was short-lived. Kajang thrived on the rubber industry, which was started in the 1890s by the Kindersley brothers, who were from Scotland. They established a company called Inch Kenneth and introduced rubber planting to the area. The company is still in existence and is known as Inch Kenneth Rubber Estates Ltd.

Kajang began to expand in the 1980s when Kuala Lumpur and Petaling Jaya became overpopulated and property prices there shot up. Housing demand in Kajang increased from the spillover effect in 1990s, and property developers bought up rubber plantations and began developing the land.

According to Lee, the first brick houses in Kajang were built in 1895. There are no records of where the oldest buildings in Kajang are located but based on the building materials and design, it could be those in Jalan Tukang, Jalan Mendaling and Jalan Tengah.